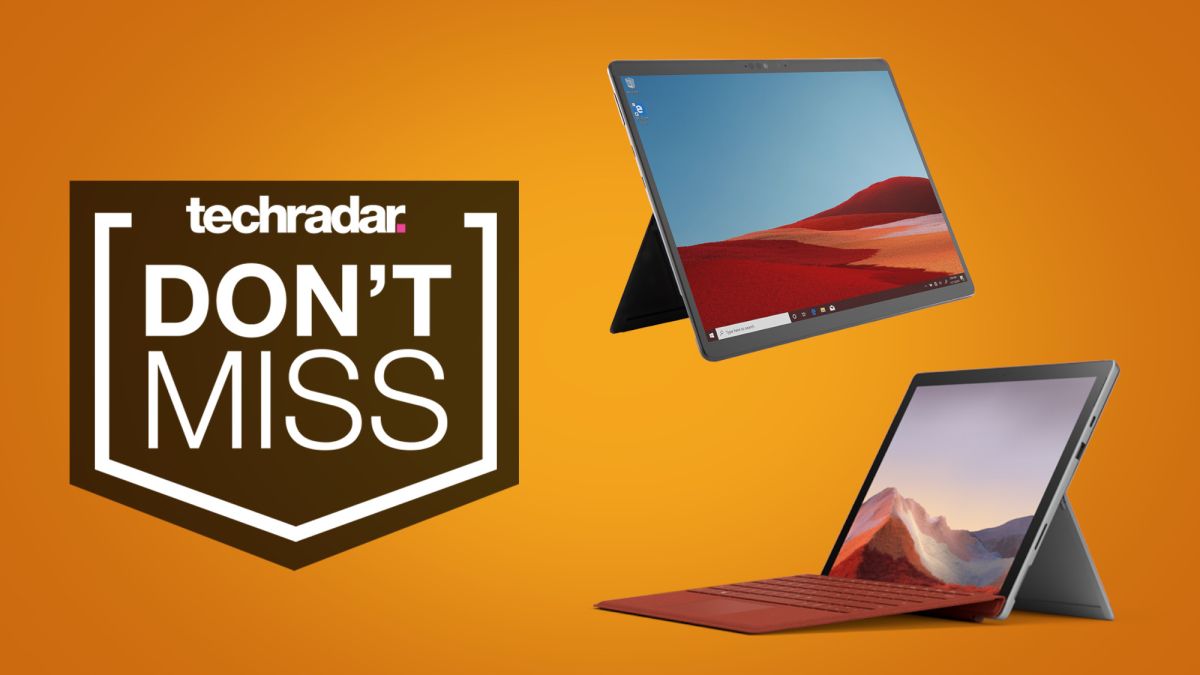 Surface Pro sales are here this weekend thanks to Amazon and Microsoft, spoiling us for choice when it comes to picking up a (relatively) cheap Surface deal on these fantastic premium tablets.

Our pick of the bunch is this Surface Pro 7 with a bundled black Type Cover for $799 (was $1,029.99) – a massive saving of $230 overall. Not only are you getting a handy accessory here that’s worth $100 by itself alone, but you’re also getting an upgraded spec Surface Pro deal, with a 10th gen Core i5 processor, 8GB of RAM, and a 128GB SSD – which should give you plenty of space for all those movies, apps and games.

If you’re on the hunt for a Surface Pro X sale then Microsoft is also offering a tasty $300 saving on this 128GB model for $849 (was $1299.99) – which also features 8GB of RAM, making it the mid-tier upgraded spec version. This is a good consideration if you need something thin, light, but still packs a bit of power under the hood. Plus, these Surface Pro X’s also feature LTE cellular connectivity built-in, which is a nice bonus.

UK Surface Pro sale hunters will also be glad to know you can pick up a Surface Pro 7 deal at Amazon right now for just £798 (was £899). This is the same upgraded spec previously mentioned with the US deal, so you’re getting a really speedy tablet though the black Type Cover isn’t being bundled here. If you wanted, however, you could pick one up separately and still be under budget.

Not in the US or UK? Check out the best Surface Pro sales in your region below.

Surface Pro sales and deals in the US

Microsoft Surface Pro 7 + Black type cover | $799 at Amazon
This $230 off Surface Pro deal is a really special one indeed, as not only are you getting a great 2-in-1, you’re also getting a type cover bundled in that’s worth $100 alone. The Surface Pro itself also features a 10th Gen Intel Core i5 processor, 8GB of RAM, and a 128GB SSD – extremely speedy specs. Note: this deal is also available at Best Buy for the same price.
View Deal

Microsoft Surface Pro X | $849 at Microsoft
This 128GB SSD, 8GB Surface Pro X has a neat $300 discount right now, meaning you can save yourself some big bucks on Microsoft’s latest premium tablet. This Pro X doesn’t quite feature the same power as the Pro 7 above, but it is thinner, lighter, and features full built-in LTE cellular connectivity as well.
View Deal

Surface Pro sales and deals in the UK

Microsoft Surface Pro 7 | £798 at Amazon
While you’re not getting that bundled type cover with this Amazon Surface Pro sale, you are getting a tasty £100 off the standard price, which means you can still pick up a type cover and break even, if you choose. This Surface Pro deal is for the same 128GB SSD, Core i5 processor version as the above US deal, meaning it’s not the basic version, but a significantly upgraded spec.
View Deal

Microsoft Surface Pro 6 | £759 at Amazon
Another fantastic Surface Pro deal in the UK is this £50 off on a Surface Pro 6 at Amazon. Sure, it’s a slightly older model and has an 8th gen Intel Core i5 instead of a 10th gen, but it’s packing a 256GB SSD which makes it a good option if you’re going to storing tons of high-definition media and apps.
View Deal

The best Microsoft Surface deals in your region

Apple’s Tim Cook: Parler could return ‘if they get their moderation together’

Learn chess, checkers, and backgammon with this 3-in-1 set

Apple’s Tim Cook: Parler could return ‘if they get their moderation together’