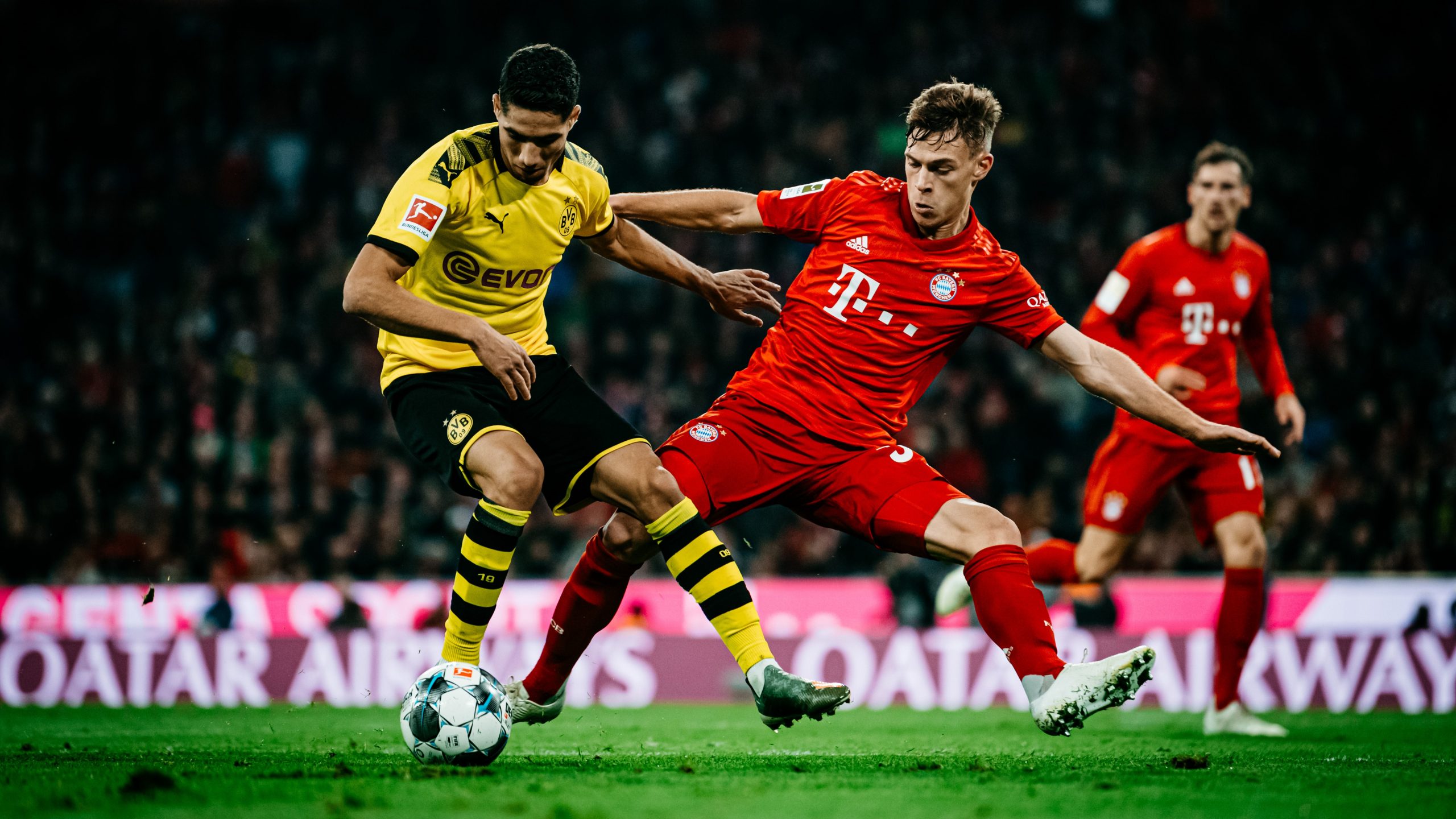 There’s a round of mid-week fixtures taking place in the Bundesliga this Tuesday and Wednesday – and things don’t get any more exciting than tonight’s Dortmund vs Bayern match. Der Klassiker could well decide the German title race this season and today’s result at the Westfalenstadion is crucial for both teams. Don’t miss a second of the action – here’s to watch a Dortmund vs Bayern live stream from anywhere in the world right now.

Dortmund are piling the pressure on league leaders Bayern, with six straight wins and nine victories from their last 10 – the latest coming on Saturday with a 0-2 victory thanks to goals from Raphael Guerreiro and Achraf Hakimi.

This evening’s game takes place behind closed doors at Dortmund’s Signal Iduna Park, or the Westfalenstadion. Kick-off is at at 6.30pm local time (CEST), which is a 5.30pm BST start in the UK and 12.30pm ET / 9.30am PT in the US – where Fox Sports provides coverage and can be streamed as part of a FREE 1-week Hulu trial in most of the country.

The win saw Mats Hummels pick up a knock, however, which makes him a doubt for tonight’s crucial clash. Jadon Sancho is in contention for a starting spot after his cameo from the bench against Wolfsburg saw him pick up an assist for Hakimi’s winner.

But Bayern are on equally imperious form, with the currently title holders enjoying a 5-2 win over Eintracht Frankfurt at the weekend. A win tonight for the visitors would open up a potentially unassailable 7-point lead over Dortmund, but they may have to make do without key players in order to do so, with Thiago and Serge Gnabry both struggling for fitness

It’s likely to be one of the games of the season – so check out our guide below and find out how live stream Dortmund vs Bayern and watch the Bundesliga online tonight from anywhere in the world.

If you’re abroad this evening but still want to watch coverage of the match from your home broadcaster, you’ll need a VPN to do so. That’s because your normal coverage will be geo-blocked.

A VPN allows you to change your IP address so you appear to be in a completely different location. We’ve tested hundreds of VPNs and can recommend ExpressVPN as the best VPN service currently available.

BT Sport has the UK rights to the Bundesliga and will be showing EVERY match on TV and online for the remainder of this pandemic disrupted season, including this evening’s top-of-the-table Dortmund vs Bayern clash.

BT Sport is available as part of the provider’s wide range of TV and broadband packages – as well as being offered as an add-on with Sky. Subscribers can therefore stream games either on the BT Sport website or by using the BT Sport app.

This evening’s match in on BT Sports 1, with coverage beginning at 5pm ahead of a 5.30pm BST kick-off.

How to watch Dortmund vs Bayern: live stream in the US for FREE

In America, Fox Sports is the TV home of the Bundesliga with live games being shown across a combination of FOX Sports 1, FOX Sports 2, FOX Deportes, FOX Soccer Plus and Univision Deportes each match week.

Bayern Munich vs Eintracht Frankfurt will be broadcast live on Fox Sports 1 along with FOX Soccer Match Pass, FOX Deportes and Foxsports.com, with kick-off at 12.30pm ET or 9.30am PT.

Assuming you have cable, you’ll be able to watch on Fox either at home, online or on the network’s Fox Sports Go app for tablets, smartphones, and other devices.

Anyone who doesn’t have cable but wants easy access to Fox Sports may want to consider Hulu. The popular streaming service’s Hulu + Live TV package typically includes the two main Fox Sports channels, FS1 and FS2 -check your local availability here – and offers a FREE 1-week trial so you can see if it’s the right option for you.

How to watch a Dortmund vs Bayern live stream in Canada

In Canada, subscription TV channel Sportsnet World has the rights to show the Bundesliga, but if you don’t have that, you can sign up to its Sportsnet Now streaming service to live stream all the Bundesliga matches Canada has to offer in HD.

However, if you want to watch while away from Canada, your best bet is to fire up a VPN and access the coverage.

To watch this huge Bundesliga match in Australia you’ll need to be a subscriber to beIN Sports who have exclusive live coverage rights to the German top flight for the remaining games of this season.

This clash between Dortmund vs Bayern will be on beIN Sports 1 with pre-match coverage beginning at 1am and kick-off at 2.30am AEST in the early hours of Wednesday morning – and don’t forget you can use a VPN as described above if you’re not Down Under as usual right now.

How to watch Dortmund vs Bayern: live stream from New Zealand

As in Oz, beIN is also the sole rights holders for live coverage of the Bundesliga in New Zealand this season.

To watch Dortmund vs Bayern tune in to beIN Sports 1, where kick-off is set for 4.30am NZST on Wednesday morning.

Telegram can now import your WhatsApp chat history on iOS

Global Privacy Control wants to succeed where Do Not Track failed

Telegram can now import your WhatsApp chat history on iOS

Global Privacy Control wants to succeed where Do Not Track failed