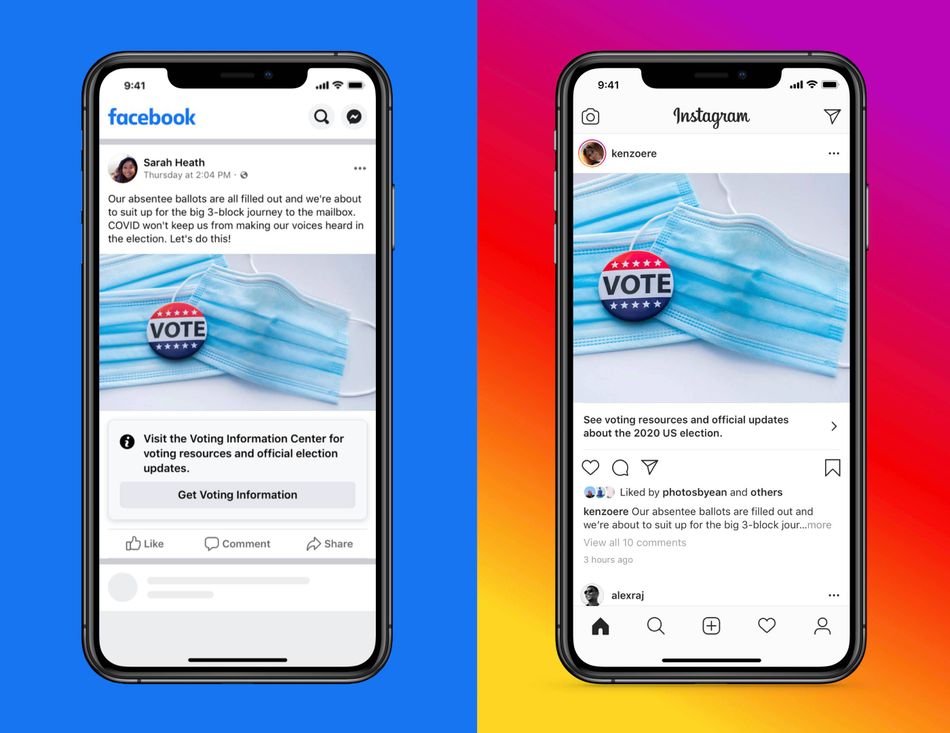 Facebook took a teeny step forward on its tightrope walk between helping people vote in 2020 and not pissing off President Donald Trump.

In a livestreamed video Friday, Facebook CEO Mark Zuckerberg shared new policies that he claims will help people cast their ballots in the 2020 elections. This work falls to Facebook because misinformation about voting spreads on its social networks, including Instagram and WhatsApp, like wildfire. Standing for a cause like “voting” also seems like a neutral issue that would generate public goodwill — or so one would think.

Zuckerberg announced that the company would add a link to “authoritative information” on all Facebook and Instagram posts having to do with voting. That “information” will consist of a link to Facebook’s new Voting Information Center. It’s a portal with information about registering to vote and polling places, as well as resources from election officials.

The announcement is loaded because Trump used Facebook to spread misinformation about voting, and the company did nothing about it.

In a carefully worded statement, Zuckerberg said he wanted to give users solid information about voting, but didn’t want to judge the content of posts on the topic. He explicitly specified that the policy will affect posts from politicians — presumably, including Trump.

“We are adopting a policy of attaching a link to our Voting Information Center for posts that discuss voting, including from politicians,” Zuckerberg wrote. “This isn’t a judgement of whether the posts themselves are accurate, but we want people to have access to authoritative information either way.”

In May, Trump tweeted about the supposed dangers of absentee voting, claiming it would lead to a “rigged election.”

Currently, many states are adopting or moving to broaden mail-in voting, so that people can vote without fear of contracting coronavirus. Trump said higher voter turnout favors Democratic candidates — so it makes sense that undermining absentee voting would work in the president’s favor in November.

The president’s unfounded absentee voting alarmism did not go unnoticed.

Twitter added a label to his tweet, which linked out to articles that showed there is no evidence that mail-in voting leads to fraud. It also flagged another Trump tweet that glorified violence against protesters.

The president railed against “censorship” and even signed an executive order pressuring Congress to revoke key legal protections for social media companies.

Twitter took at least some action. Facebook, on the other hand, left the posts up without any labels.

Despite Facebook’s own policies against voter suppression, it defended the decision by describing the president’s posts as “valid debate.” This is itself a form of voter misinformation, since there is no factual debate about the security of absentee voting, and claiming there is confuses the issue and undermines the public’s faith in the electoral process.

Facebook’s moves seem to have helped it skirt the president’s ire. Trump briefly ran attack ads on Facebook against Twitter and Snapchat — which announced it would no longer promote the president’s channel in its Discover platform — for “censoring” him.

However, Facebook saw major backlash this week for its continued weaksauce response to Trump’s many inflammatory claims about voting, protesters, immigrants, and more. Companies including Ben & Jerry’s and Verizon signed on to a July ads boycott, suggested by several non-profit organizations. The NAACP pointed to the spread of misinformation and the undermining of democracy as one of the reasons for the boycott.

Now, days before the July boycott is set to begin, Facebook gets to publicize small changes without fundamentally altering its business model, which in part relies on high engagement from many Trump supporters.

In addition to the links to the Voter Information Center, Facebook said it would add a label to posts that violate its policies (such as hate speech) if they’re newsworthy (i.e., if they’re from Trump).

An intentionally non-judgmental link to “more information” is basically the mildest form of fact-checking Facebook can do. But it’s at least — ever so slightly — better than its previous policy of doing nothing.