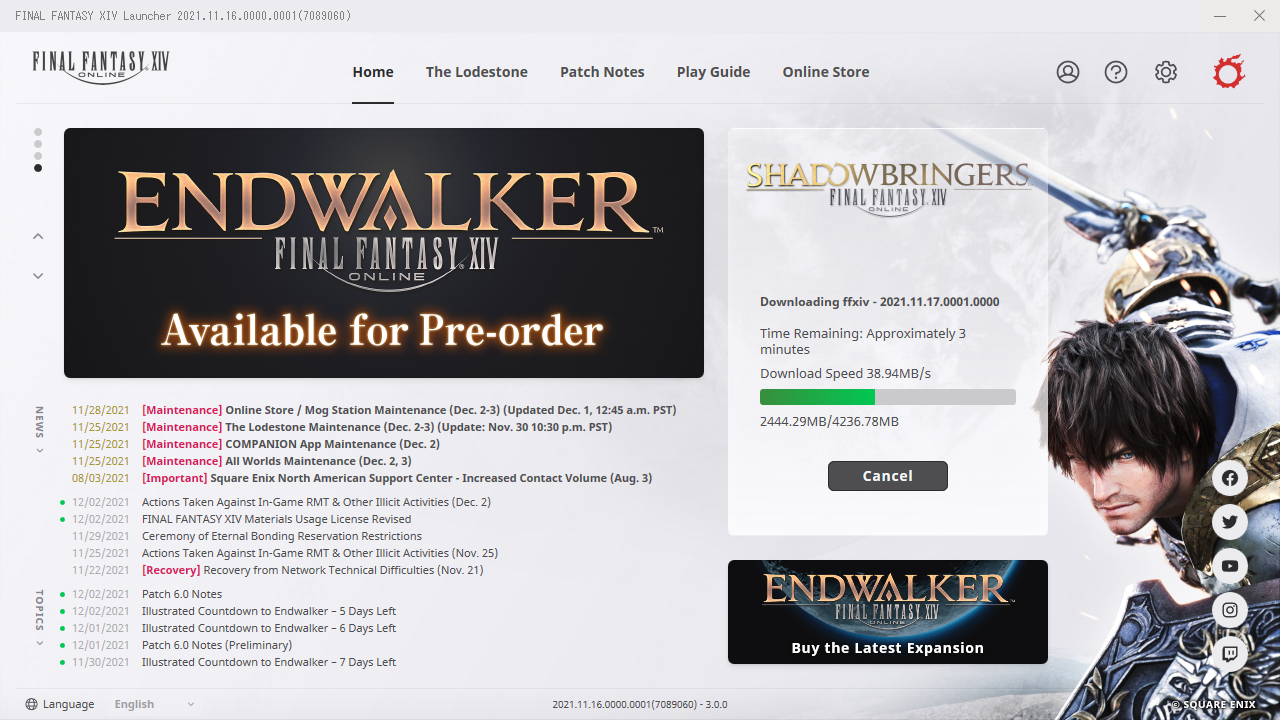 Ok, one last update. Just a PSA: you can log into the launcher and download the patch now. It’s about 4GB, so not huge, but not something you want to be downloading when you know you’re going to already be waiting for a server queue.

Though, while you can log into the launcher to download the patch, you can’t log into the actual game yet. For that we just wait for the servers to go back up.

Probably the last update until servers go up. I think I decided on leveling Astrologian to 90 first, just because I really want to try out the new card system and also really don’t want to spend hours in the Bozjan Southern Front to grind from 70-80 to level Sage.

That reminds me, there are two new classes in Endwalker: Sage and Reaper. If you’re going to level either of these from the get-go, keep in mind they both start at level 70, so you’ll have to do a bit of grinding before starting the new main story content.

And for anyone wondering the launch that happens tomorrow morning is technically early access, but you can still get access by preordering the expansion either on Steam or on Square Enix’s own website (or PSN if you play on PS5).

Then again, if you haven’t played at all, did you know Final Fantasy XIV has a free trial up to level 60 that includes the award-winning expansion Heavensward? You can get that right here.

Until the servers go up at 4am, I’m going to get some sleep. I’ll see everyone bright and early to wait in a server queue.

Ok I have made it home, eaten a sandwich and taken my meds, now it’s time to wait for the servers to go up. In the meantime, it looks like Square Enix has put out a letter about the launch of the expansion, and get ready for server queues.

The company does include a workaround in that blog post if you’re on a particularly crowded World. You can simply log onto another World on the same Data Center, by right clicking your character and selecting “visit another world server”.

There are also a number of potential issues called out in the blog post, probably just to let players know that there will probably be some issues with the launch.

I’ve seen so many MMO expansion launches and none of them have gone smoothly, so I totally expect some long queues and server crashes. And don’t worry, it’ll all be chronicled right here.

About to leave the office and head home now. Now I get to spend the ride home deciding which job I’m going to take to 90 first. Will it be White Mage? Astrologian? Or  am I going to suffer through leveling Sage from 70-90 at the beginning. Only time will tell.

I’m just finishing up a couple things in the office, before I can go home, eat some food, and get some semblance of sleep in before the servers are expected to go live at 4:00 am EST. Looks like it’s going to be an early morning for me.