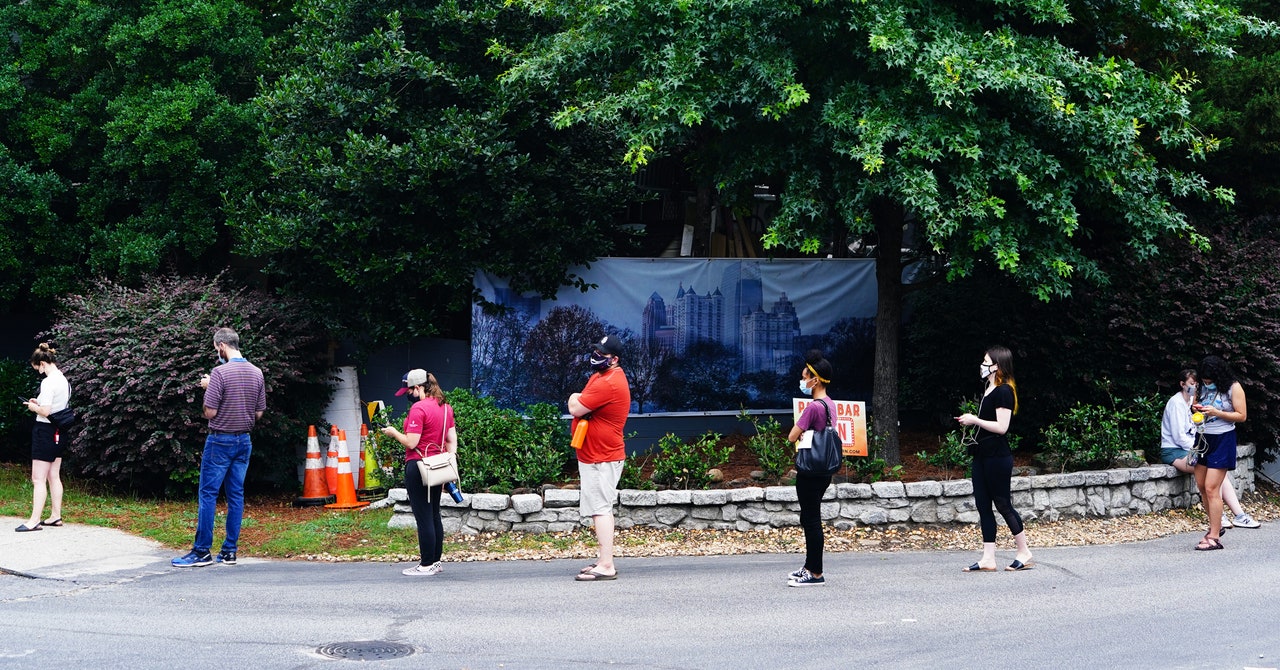 Here’s how in-person voting should look during the coronavirus pandemic: lots of polling places, fully staffed with well-protected election workers, each serving small numbers of voters who are able to quickly get in and out without having to congregate at length in close quarters. Here’s what happened in Georgia on Tuesday: not that.

Despite a record level of absentee voting, the state was beset by a multifaceted fiasco on election day, which forced thousands of would-be voters to wait as long as four hours to cast ballots and seemed likely to disenfranchise thousands more. The problems mostly preceded the coronavirus, but they were made worse by election officials’ response to the public health crisis. In a disturbing sign of what’s to come in November, Georgia is far from the only place where this is true. Election officials around the country continue to bungle the task of conducting elections during the pandemic.

Georgia’s elections are notorious even by southern standards. Since the Supreme Court overturned a key portion of the Voting Rights Act in 2013, the state has closed 214 polling locations, many in poor, rural counties with large African American populations. The current governor, Brian Kemp, presided over his own election in 2018 while serving as Georgia’s secretary of state and overseeing a purge of hundreds of thousands of registered voters. Adding to concerns over its election administration, the state last year committed to spending over $100 million on new electronic voting machines even as experts warned that paper ballots would be more secure and reliable. The new machines evidently malfunctioned disastrously on Tuesday, at least in certain heavily African American districts, vastly compounding the problem of inadequate polling locations. Local and state officials traded blame. Secretary of State Brad Raffensperger, a Republican, called the problems “unacceptable” and promised an investigation into election management in the Atlanta area.

The problem of race-based disenfranchisement is as old as the nation, and reducing polling locations is one of the oldest tricks in the voter suppression book. The situation in Georgia, however, shows that local officials, who in large urban areas tend to be Democrats, are compounding the problem through their misguided response to the pandemic. Faced with a shortfall of election-day volunteers, who tend to be elderly and thus more at risk, and with locations like schools and churches sometimes out of commission, some jurisdictions have consolidated in-person polling sites. In the Atlanta metro area, for example, around 80 polling sites were closed down since the pandemic, according to Georgia Public Broadcasting; the resulting consolidation meant some sites were expected to serve more than 10,000 active registered voters. In last week’s primary in Washington, DC, only 20 polling places were open, down from more than 100 in normal election years. Even in a relatively uneventful primary election, some voters ended up waiting upwards of five hours. The story was the same in Milwaukee and Green Bay during Wisconsin’s instantly infamous primary in April.

This is maddening, because closing polling sites during a pandemic is the exact opposite of what election officials ought to be doing. It might have been forgivable a few months ago, when it was a question whether voting in person should take place at all, but we now know better. It’s clear that, outside of a handful of states that already run their elections through the post, the country is nowhere close to shifting to an all-mail election—meaning some degree of in-person voting is inevitable, and must be planned for. That’s in part because even where officials attempt to expand absentee voting, it doesn’t always work. Georgia, to its credit, sent absentee ballot request forms to every active registered voter in the state. But, as in other states and cities, many voters who applied for a ballot never got one. (When I tried to apply for an absentee ballot in DC, the city’s new voting app didn’t work, forcing me to vote in person.) Failure to provide adequate in-person options could disproportionately hurt minority voters, who historically are less likely to vote by mail.