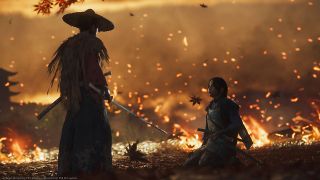 Historical epics are no strangers to the open world genre. We’ve globe-trotted and time-hopped with Assassin’s Creed everywhere from Ancient Egypt to the pirate-filled Caribbean, while Red Dead Redemption recreated the Wild West so perfectly you could almost taste the chewing tobacco. But whether you’re playing as a Grecian heroine or a bandana-brandishing bandit, these have been open worlds to be conquered and tamed, rather than cherished.

Not so it seems with Ghost of Tsushima, the upcoming PS4 historical open-world adventure from Infamous developers Sucker Punch, which sees a wandering samurai fending off a terrorizing Mongol invasion force from his homeland. In keeping with its Feudal Japanese setting, protagonist Jin Sakai has a far more peaceful relationship with the island of Tsushima that he inhabits – he’s at one with nature, rather than looking to hunt and skin its animal inhabitants for an arbitrary gear upgrade.

“Our goal for the game is to have a grounded human focus on Jin and his story. We wanted to focus on something that was human and emotionally driven and story driven – we like to make story-driven games,” Jason Connell, Creative Director and Art Director for Ghost of Tsushima at developer Sucker Punch, told TechRadar.

“We want you to be connected in the way that Jin is connected to the island. He loves Tsushima, this is his home and that’s very important to him when these invaders come and they’re torching the landscapes and taking over sacred locations. This is his home, and they are wrecking it. And so, he was willing to sacrifice anything to protect this home and these people. What better way to make you feel a sense of your homeland than if nature helps too?”

Tsushima’s animal population isn’t a mere resource to be harvested, then. Instead, by paying close attention to the behavior of birds, foxes and other wildlife, Jin will be able to find secrets hidden among the sprawling island, a location that Sucker Punch’s play testers are finding it easy to spend “five days straight” playing inside “without getting to the end of the story,” says Connell.

It’s not just animals that will help Jin, but also the very elements themselves.

“We don’t go as far as to say that it is fantasy or anything like that but there’s some connection between Jin, the wind, and these animals – maybe it is spiritual but we don’t go to an effort to try to explain it,” says Connell.

The wind in particular plays a crucial role. In an inspired move, it acts as a visual compass, removing the need for a distracting module in the game’s heads-up display. Set a destination on the map, and the wind will guide you to the location, with calligraphy-like gusts and trails of leaves cutting a path across the gameworld in a naturalistic way.

“From the first slide deck talking to the team about our direction and the goals and the way we wanted Tsushima to look and feel, the wind was right up there, alongside bold colors,” says Connell.

“The goal was that everything was moving in the frame if possible, and the reason it had to be early is that that’s a pretty big technical hurdle to overcome.

“Eventually we got to a point where it works and everything moves. The wind though is a theme throughout the game – we were also kind of like ‘okay, the game is beautiful, it’s a great visual experience. How do we keep you in this world and not have UI up on the screen as much?’ That was another goal, it just wasn’t as mature a goal until about midway through the project. And then one of our team members suggested, ‘Well, let’s see if we can have the wind guide you.’”

It also ties into a historical beat the developers wanted to tap into, explains Connell.

“There’s actually historical context to the wind in this time period. The Mongols came and there’s this force of wind that came and drove them away and sunk all their ships, which is kind of a miraculous story if people want to read about it – it happened again, a few years later.

“So there’s like this ‘protective’ wind over the island which is interesting, that’s a great thematic tie […] And so by using the wind, part of nature, part of the island, helping you as you’re playing through it, the idea is that maybe you’ll identify with [Jin’s] love for the island as well.”

It also allows for an interface free from many of the distractions that other open-world games fall foul of.

“All HUD serves a purpose. You know it’s trying to help you communicate something,” says Connell.

“And so, certainly, if you remove that HUD or we say ‘hey, let’s see if we can do without HUD,’ suddenly the design problem is harder. If you say ‘no compass, no mini map,’ well, then we have to solve that with an alternative and our answer to that was the wind. I certainly have personal taste that I think a HUD-less feel creates more immersion – I’m just in the world more, I listen to the music and I hear the sounds more, and I just like my experience more.”

A dynamic HUD, combined with clever in-universe prompting such as secret-shrine guiding foxes, lend themselves to create a stunningly cinematic presentation. It’s no accident that the game evokes memories of Akira Kurosawa’s work, the master of samurai cinema.

“There are movies that have kind of stuck with us from the very beginning, all the way through to where we are now,” says Connell.

“And that is movies like ‘Seven Samurai’, that was a big inspiration just in general, it’s quite a cool story. And we also like 13 Assassins – it’s a little bit newer, certainly more modern, but has some of the same ideas behind it that were very inspiring. So those two films in particular, I think from an art perspective I pull from. Kurosawa’s ‘Ran’ is an awesome movie too – lots of color, that’s one that kind of stands out.”

From samurai to ninja-like Ghost

Kurosawa’s films weren’t afraid to paint the screen red with blood however – or dark gray for his black and white efforts at least, itself mirrored in a black-and-white film grain filter homage that Sucker Punch lets players activate from the very beginning of the game. He may be green fingered, but Jin’s a red-blooded killer, too.

“We want a wide audience, we want a lot of people to enjoy our game,” admits Connell, “But at the same time, samurai were incredibly lethal. If you have watched any samurai movie ever sometimes people die in the blink of an eye – like he’s just standing there surrounded by four people and then suddenly everybody’s dead. I feel like I’ve seen that scene, 10 times! We let you do that.”

Not that the Mongols will be a pushover.

“You can’t recreate that everywhere because then suddenly the game’s super easy or there’s maybe no challenge, and we really want the Mongols to feel like a deep presence in the world and have a challenge. One or two of them you may feel, ‘I got this’. Three or four of them slightly less so, and so it’s gonna start getting hard at five or six combatants. You better be really good at our game. I would say that it’s unique in that way that you’re balancing this lethal fighting style but at the same time you can get overwhelmed.”

While Jin may be a samurai at heart, there’s only so much mileage he’ll get from an ‘honorable’ face-to-face fight with the Mongol forces. The player will have to adapt with him, as the game guides him towards his transition to the ninja-like Ghost, where the playstyle shifts to a more covert, stealthy approach.

“The evolution into becoming the Ghost will require using different combat stances and timing your perfect parry and dodge,” says Connell. “If you don’t master those in the game, it will potentially wreck you a little bit. We want that challenge, you want the Mongols to feel like a force.

“We do have difficulty settings. If you want a harder experience you can take it up a notch. If you feel like you’re getting beat up two much you can take it down a notch.”

Regardless of how you play, whether exploring Tsushima side-by-side with animal friends, or flicking the blood from your katana, there are few upcoming games as beautiful as Ghost of Tsushima. Its burning temples, glistening armor and serene forests show the PS4 at its very best. With the Infamous series ushering in the PS4 era, and Ghost of Tsushima its swan song, Sucker Punch has been with the console every step of the way.

“We were lucky to be one of the first games that came out on PS4 with Infamous: Second Son,“ says Connell. “That allowed us to have a good head start on what’s so great about the PS4, that was certainly helpful as we went into a new game with all kinds of new technical and creative challenges.

“Things like landscapes – how do you do landscapes and how do you do large sightlines and dynamic time of day versus static time of day, all while keeping the frame rate great? So having those early days on Infamous certainly helped us on our journey towards the ‘ending chapters’ of PS4. It’s great to be able to be there in the beginning and sort of somewhere there’s that sense of ending – it afforded us a lot of expertise, early on, to create a beautiful-looking and performing game.”

Ghost of Tsushima is rarely spoken of without the whisper of a potential PS5 port surrounding it. Connell and Sucker Punch won’t be drawn on the validity of those predictions, but appear to be pushing the ageing machine to its limits, especially on the base-spec console.

“I feel like I’m at a unique position because I asked our team, you know, like our wizards and our technical artists and artists to do crazy stuff and they always deliver, they never disappoint. So I’m not in the greatest position to say ‘Oh yeah we’re running out of this or that’. But I will say that the game looks really incredible even on the base kit which to me has been really impressive, what our team’s been able to pull out of it.“

Whichever machine we eventually get to enjoy Ghost of Tsushima on, it’ll hopefully be a fittingly epic conclusion to a monumental chapter in PlayStation history.