Google Nest Home: everything we know about the new Google speaker google home 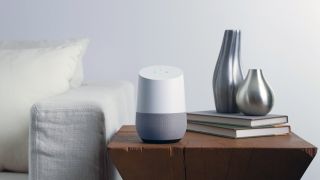 Nearly four years after the Google Home was launched, the tech giant could be on the verge of releasing a new version of its first Google Assistant smart speaker, the so-called Google Nest Home (or Google Home 2).

The new Google speaker was apparently revealed to 9to5Mac by ‘sources familiar to the matter’, and it’s poised to sit somewhere in between the Google Home and Google Home Max, the brand’s largest and best-sounding wireless speaker.

According to that source, the Google Home 2 goes by the codename Prince – like the musician – suggesting that it could have a stronger focus on audio quality than its predecessor. That means it could be a new rival for the likes of the Sonos One, the best smart speaker you can buy in 2020.

[Update: Google has announced that it’s replacing the cancelled I/O conference with a smart home event on July 8 – where we could see the Google Nest Home alongside the rumored Chromecast Ultra 2.]

What the new speaker will be called officially remains a mystery. A few years ago, Google placed the vast majority of its smart devices under the Google Nest umbrella, implying that the products were all interconnected and compatible with the Nest series of smart thermostats, alarms, and security cameras.

For now, we think the new smart speaker could be called the Google Nest Home in a nod to both old and new nomenclatures, while some outlets are calling it the Google Home 2.

When we’ll find out for sure is also up in the air, but we think a 2020 release date is feasible. In the meantime, here’s everything we know about the rumored Google Nest Home, as well as all the things we’d like to see from a new Google speaker.

Google has announced that it’s replacing the cancelled I/O conference with a smart home event on July 8 – where we could see the Google Nest Home alongside the rumored Chromecast Ultra 2.

That’s the nest feasible release date, though without confirmation we’re still left guessing as to when the Google Home 2 will really be launched.

Otherwise, 9to5Mac has speculated that it will launch alongside the Pixel 4a.

Unfortunately, we’re not sure when that will happen either, though the latest rumors say we could be waiting until October to get our hands on the next Pixel phone.

News of the latest delay comes from serial tipster John Prosser, who has been a reliable source of inside information in the past. He says an announcement about the phone will be made on July 13, but that it won’t go on sale until October.

So, we could see a launch event in mid-July, but you shouldn’t throw out your old Google Assistant speaker just yet – you might be waiting a while for a replacement.

We think that the Google Nest Home will probably be priced similarly to the original Google Home, which cost ($89 / £89 / AU$128) at launch.

If the company is looking to replace the older Google Home, it would make sense for the new smart speaker to retain that budget-friendly price.

If you can’t wait for the new Google Home, check out the best Google Nest deals we’ve found today:

According to the 9to5Google report, the new smart speaker will use Google Assistant like its predecessors, and it won’t be a smart display with a screen like the Nest Hub and Nest Hub Max.

That voice-only control makes sense if the Google Nest Home is set to replace the original Google Home or Google Home Max speakers.

The new Google speaker will apparently sport larger drivers than the first Google Home, which should give it a more powerful sound and a better bass response – however, the source suggested that it won’t be quite as sonically powerful as the Google Home Max, which boasts two woofers and two tweeters.

Looks-wise, it’s set to be kitted out with the same mesh fabric design we’ve seen with the Google Nest Mini – and it could possibly come in a range of colors, like the diminutive speaker.

Google Nest Home: what we want to see

When the original Google Home launched in 2016, we were really impressed – but a lot has changed in the world of smart speakers in the last four years, and Google itself has released superior models in that time.

So, we know that Google – and its biggest competitors, including Sonos, Amazon, and Apple – is capable of great things when it comes to building smart speakers. With that in mind, here are some of the things we want to see from the Google Home 2.

While the original Google Home didn’t sound bad per se, it didn’t exactly blow us away with its audio prowess. Compared to the likes of the Sonos One – which is admittedly, more expensive – it lacks robustness in the low end and clarity in the mid and high frequencies.

If the Google Nest Home can take a few cues from its more musically-inclined sibling, the Google Home Max, the company could be onto a real winner, combining audio fidelity with a conveniently compact build and a (hopefully) budget-friendly price.

The audio drivers in the Google Home aren’t anything to shout about, and more sound-focused buyers should probably be angling for the Google Home Max, anyway. But it’s a shame such a vast range of artists are being funneled through inferior speakers.

Google Assistant has managed to cobble together the biggest music library of any smart assistant, thanks to Google Play Music as well as the Google-owned Youtube Music – if you sign up for the service, at least. The current model can already connect to external amps and speakers over Bluetooth, but getting a physical AUX port would do a lot to win over listeners concerned about losing audio quality over the air.

The ability of a smart speaker to detect your voice accurately is crucial to its success, and Google didn’t exactly push out the boat with the original Home speaker.

According to a teardown by iFixit, the Google Home has just two microphones compared to the Amazon Echo’s seven-microphone array, which is designed to pick up your voice from every angle.

The Echo’s substantial microphone array was cited as a reason for its ability to pick up your voice in noisy environments – and if Google wants to beat its biggest competitors, it’ll need to make sure its microphone array is watertight.

Right now, no Google Home or Google Nest speakers are portable, but we’d love to see a model that can double up as a Bluetooth speaker like the Sonos Move – especially if it retains the compact design of the original Google Home.

If the Google Home 2 is portable, it would be great to see an IPX4 waterproof rating too; after all, you’d want to be able to take it into your garden on a sunny day.

The original Google Home had an air freshener-esque look to it – we’d expect that a new version would borrow from the design of Google Nest Mini and opt for an all-over mesh fabric look.

Isn’t this what we always want? The Google Home retailed at £129 / $129 / AU$199 at launch, so we imagine the new model would seem a good deal by bringing in upgraded features for the same price. However, getting an enhanced model that matched more closely to the Amazon Echo’s £89 / $99 / AU$119, would do a lot to lower the price barrier for new adopters.