Healthcare workers are saving lives. Here’s how you can send them your gratitude. 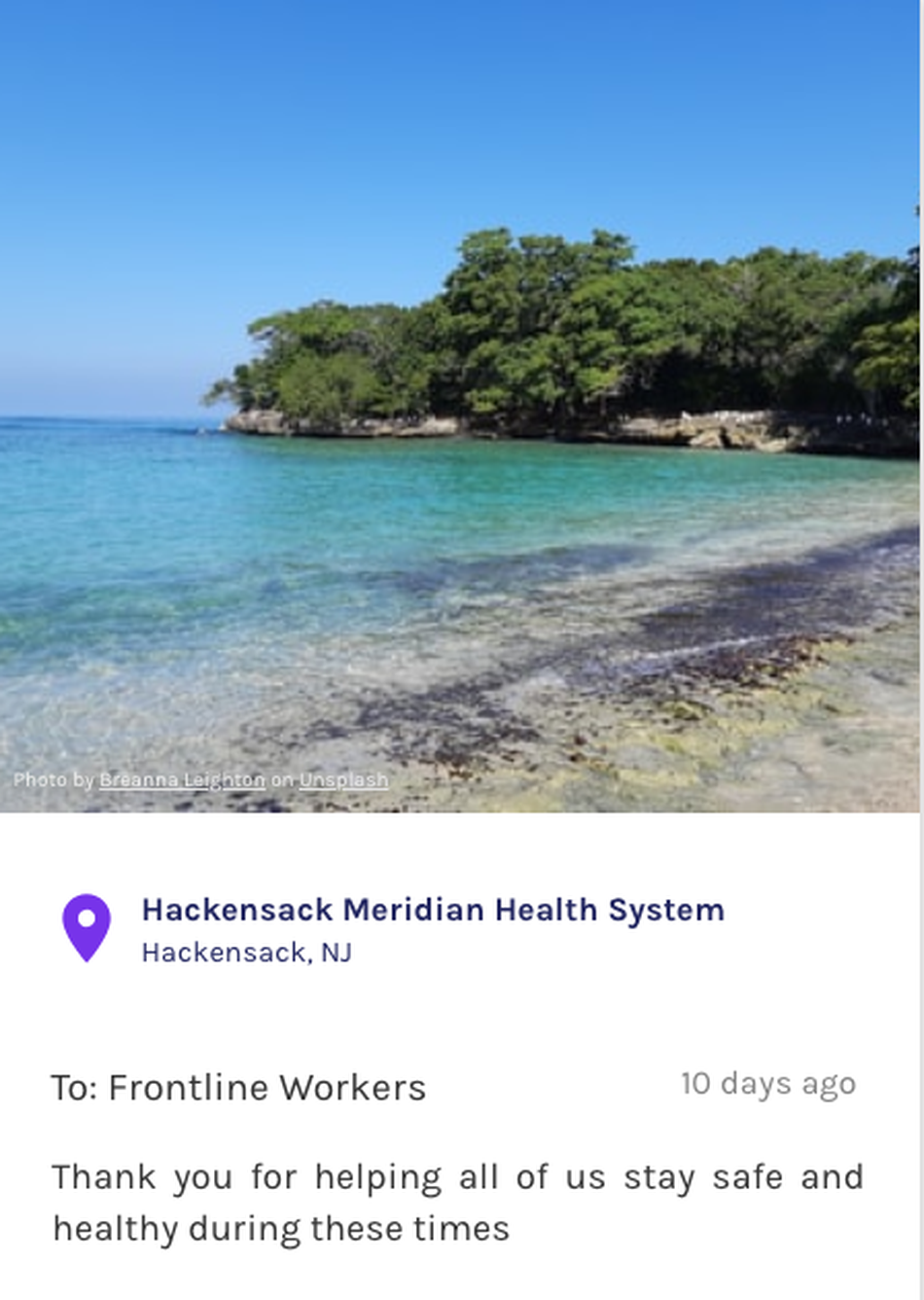 Amanda, an intensive care nurse at a New Jersey hospital, woke up exhausted on a recent morning with one more shift left before her week ended.

She picked up her phone to see that Russ, a man she’d never met before, sent her a video through 6FTCloser, a volunteer-run platform launched as a way to help people deliver messages of gratitude to all frontline workers whose jobs are essential during the coronavirus pandemic.

Amanda, who requested her last name not be used for privacy reasons, pressed play on Russ’ video.

He began singing Stand by Me, the soulful Ben E. King ballad released in 1961.

“Hey, Amanda, my name is Russ,” he said. “I just wanted to send a little song your way to hopefully bring some cheer and some light to your day. I wanted to say thank you for standing by the people of New Jersey and for the ways you’re giving yourself to your community to see healing take place there. Keep fighting the good fight and know that we’re cheering you on.”

“It was totally unexpected, and exactly what I needed,” says Amanda. “I’d been around a lot of death, a lot of really sad situations, not having family allowed in the hospitals, no family being able to say goodbye, holding people’s hands as they take their last breaths, doing CPR on people you’ve already lost.”

She says the video helped reel her back in from a dark place, serving as a reminder that her work as an ICU nurse matters, even if she’s losing more patients than she ever expected.

Amanda, who knows the co-founders of 6FTCloser from their time together in college, saw the platform launch on social media in April. A friend nominated her to receive Russ’ message.

The platform invites people to nominate any frontline worker using their email address or phone number. A volunteer user like Russ is then matched with the recipient and generates a video that is sent by link via text or email. Users who create videos are not given the recipient’s contact information, only their first name. Each video is watched by volunteers to ensure it contains nothing obscene or objectionable, and the frontline worker receiving the message has no obligation to view it.

Since the launch of 6FTCloser, people have sent more than 1,500 messages to frontline workers, including nurses, doctors, delivery workers, and postal carriers.

Co-founder Noah Friedman says the platform stemmed from his personal desire to express gratitude to those on the front lines. He favored video messages because of the medium’s intimacy; a caring facial expression and tone of voice can feel much more personal than text on a screen.

“I was hoping to create something that would be simple for me and my friends to do but hopefully disproportionately impactful,” he says.

“I was hoping to create something that would be simple for me and my friends to do but hopefully disproportionately impactful.”

Friedman isn’t alone in his desire to thank frontline workers, particularly those battling COVID-19 in hospitals. In addition to the daily applause that breaks out in the evening across the U.S. and in other countries, messages of gratitude have flooded social media for weeks.

The #HealthcareHeroes hashtag is populated with that sentiment on Twitter, Instagram, and Facebook. Some hospitals like University of Chicago Medicine, Hennepin Healthcare in Minneapolis, and OSF Healthcare in Illinois and Michigan have invited patients and the public to thank staff.

Wambi, a company that provides software to hospital systems so they can elicit positive feedback from patients and share it in real time with employees, made its Carepostcard program available to the public so anyone can submit messages for health care workers using the platform. Users enter the name of the recipient, write their message, and post it to the Carepostcard website. They can include hashtags like #HealthcareHeroes, #thankanurse, or #thankadoctor so that healthcare organizations can easily find them.

Rebecca Metter, co-founder and CEO of Wambi, says the platform will eventually allow health care workers to sign up to receive messages directly. In the meantime, Wambi is partnering with nurses’ associations, large healthcare organizations, and “healthcare influencers” to reach staff with messages.

Cherie Chase, a patient care and clerical tech in the oncology unit of University of Maryland Upper Chesapeake Health, says hospital staff look forward to Carepostcard messages that they receive internally, via the hospital’s system. The notes of support help them feel recognized and appreciated, which in turn lessens what Chase describes as a “heavy burden.”

“The more people do that, it encourages us to led the load down,” says Chase.

Amanda is hopeful that the gratitude people are expressing for frontline workers now marks a long-lasting shift in the country’s values. Indeed, some healthcare workers worry that focusing on and praising heroic efforts on the frontline will distract from the broader structural problems that put nurses and doctors, for example, in a position where they lacked personal protective equipment.

“I hope our society doesn’t go back to the way it was,” she says, adding that she’d like to see “a little more respect for people who do hold [essential] jobs, who before didn’t necessarily get seen.”