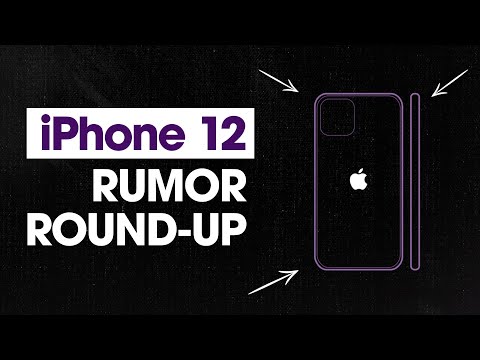 Hell, the combination of sifting through information and following all the leaks is almost like a soap opera. Apart from instead of the finale being some familial murder, it’s just some nerds getting excited.

Anyway, we’ve put together a lovely video rounding up some of the most prevalent iPhone 12 rumors, something you can watch above. So, I dunno, go and do it?

But… what if you aren’t a fan of watching videos? Well, you’re in luck, because we’ve put together all the salient points in word form for you too. God, we’re good.

Now, there are some analysts who believe there will be four iPhone 12 models: one 5.4-inch phone, two 6.1-inch devices, and one 6.7-inch model.

Effectively, what this means is there might be two standard iPhone 12 devices, one regular and one Max. Then there will be two Pro models, which is similar to what we have today.

This is entirely possible, but it appears more likely that Apple will follow its current approach and release three iPhone 12s. Specifically, an “entry-level” version, and two Pro models: one regular-sized and one Max.

Considering the iPhone SE has just been launched as a “budget device” — and many people are rightly concerned about it success —it would be a strange move for Apple to cannibalize its own handset and muddy the market by releasing a new 5.4-inch iPhone 12.

Despite this, there appears to be more and more evidence there’ll be four models now. We’ll just have to wait and see.

When will they be launched?

At the moment, it’s tough to say. Apple normally releases its iPhones in September, but — as you’ve probably noticed — we’re in the midst of a global pandemic.

For more information on this, you can check out this article. But new data and leaks are coming out all the time.

The current thought is that Apple will try and get the iPhone 12 range out in 2020 — but there is always the chance they’ll arrive next year instead.

One of the most interesting iPhone 12 rumors is that we’ll see a big change in its overall design.

Some of the latest renders and leaks seem to have confirmed that Apple is looking to its gorgeous iPhone 4 with its newest range. Effectively, this would mean a squarer design with sharper edges.

To be honest, the iPhone is due an aesthetic re-design, so this would be a positive move.

What the iPhone 12 rumors are saying about the cameras

While we expect the number of cameras to stay the same, they’ll probably all get a megapixel bump. This means that the regular iPhone 12 will remain with two cameras, and the Pro range will have three.

On top of this, Apple is consistently working on its image processing software, so we should see some improvements there too — but that’ll most likely be an iOS 14 update.

The biggest potential change though is the introduction of a time-of-flight sensor, or LIDAR. These are subtly different things (more info here), but the end result is basically the same for the user.

What the technology does is fire out artificial light and track when it bounces back to the lens — effectively creating a 3D map of an area.

There are two big benefits of this: The first is improved photography, as the iPhone will be able to separate the background from the foreground with more accuracy. Things like portrait modes will get much better.

The second is AR. Being able to accurately 3D map an area will make augmented reality experiences more realistic and engaging — so watch out for Apple concentrating on this space in the coming months and years.

It’s doubtful we’ll see the same leaps in battery life as there were from the iPhone X range to the iPhone 11 — which delivered several extra hours of use in the Pro range — but I’d expect to see an iterative upgrade, which’ll squeeze some more run-time out of your device.

The iPhone 12 rumors circulating about displays

It’s rumored that all the iPhone 12 models will have OLED screens this time round — currently, only the Pro devices have this feature.

Some analysts are expecting Apple to introduce 120Hz displays with the iPhone 12 Pro range. Currently, all of Apple’s phones have 60Hz displays. This would also be a good way for the company to help differentiate the regular from the Pro models.

Will we see 5G? This is what the iPhone 12 rumors are saying

Now, while there were a lot of conflicting reports about Apple including 5G in its phones — mainly due to a combination of the pandemic and public indifference — it now seems clear that this will happen.

Of course, there could always be a surprise in store, but this seems very, very unlikely.

It appears the iPhone 12 is about to get significantly more powerful than its predecessors. A leak of the upcoming A14 bionic chip — the processor that’ll be used in the new models — was benchmarked and the results were damn impressive.

Without getting bogged down in details, some folks believe it’d be the fastest chip in a phone ever and give the iPhone 12 better performance than the current 12.9-inch iPad. Which is wild.

And what might Apple do with this extra power? Well, as I mentioned earlier, this could be the time for Apple to start concentrating on AR. But, considering the company has been using this tech in its demos, yet it hasn’t really caught the public’s attention, suggests Apple needs to do something really big.

But whatever that is, who knows?

Now these upcoming bits aren’t official iPhone 12 rumors or based on anything concrete — they’re just some pie-in-the-sky wishes from a die-hard Apple fan. I know they won’t happen, but we can all dream, right?

Get rid of the notch

Honestly, it’s ugly as hell and I hate how it looks — even after living with it for all these years.

Still, while it might sound simple — and as much as I’d love Apple to just completely drop it — one of the reasons stopping them moving to say, a cut-out display, is the amount of FaceID tech in the notch.

There is a rumour going round that Apple will reduce the size of the notch this time — but that’s not been totally confirmed. All I can say is: Apple, I believe in you. You can do it.

Again, this isn’t going to happen for two main reasons: The first is it’ll make the phone less water and dustproof, and the second is that Apple makes a decent amount of cash replacing old phone batteries.

It would be cool though, wouldn’t it? To be able to keep a spare battery in your bag and swap it out whenever it’s drained. What a world.

The EU might eventually force Apple to do this anyway, but it’d be grand if the company got onboard with the standard and just made everyone’s life a bit easier.

Don’t hold your breath though. The cable is a big old money-maker for Apple, so they’ll be in no rush to replace it.

Bring back Touch ID — but on the power button

Touch ID and fingerprint scanners are, in my mind, still the best and most reliable way of unlocking your phone. It sucked when Apple took them away from its flagships.

But a current brilliant trend has seen phone manufacturers put a fingerprint scanner on the power or main select button on the side of the device — and I love it. Fantastic.

Apple, you can keep FaceID, but why not add a side-mounted fingerprint scanner on the iPhone 12 too? Please? For me?

Well, there you have it! A round-up of some of the iPhone 12 rumors currently floating around. We’ll try and keep this piece updated as more information surfaces. Anyway, bring on September! Or October! Or November! Or December! Or 2021!