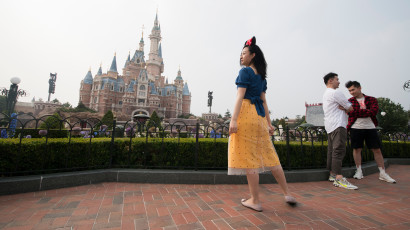 Disney’s theme park in Shanghai, China reopened today for the first time since January 25, when it became the first Disney property to close as a result of the coronavirus pandemic. Theme parks around the world are closed, but everyone is keeping an eye on Shanghai as this new trial could determine what the future of theme parks look like in the age of covid-19.

Disney CEO Bob Chapek announced on May 5 that Shanghai Disneyland would reopen on May 11, and tickets sold out almost immediately. The park is only allowed to stay open at 30 percent capacity, according to Chinese government guidelines, which means fewer than 24,000 people were admitted today.

But this wasn’t your typical Disneyland experience, judging by the photos and multiple reports from news outlets that covered the park today. Masks and temperature checks were mandatory for both guests and employees. And there were a lot fewer people than usual, as you can see.

In fact, if there wasn’t a deadly pandemic going on, it looks like it would’ve otherwise been a great day to get on every ride with minimal lines and plenty of space to roam.

Rides like the Tron Lightcycle Power Run appeared to be operating at lower capacity, though it’s not clear if that was a conscious decision or something that just happens when you only let 30 percent of your regular attendance in.

Other rides, like the Roaring Rapids, appeared to seat just one family at a time, a logical choice for an attraction that can only fit eight people per vehicle. But again, it’s not hard to space people out when you’re only operating at 30 percent capacity.

There was a lot of open space, but people naturally huddled together to meet with costumed characters.

The restaurants and walk-up foot stalls of Shanghai Disneyland looked virtually deserted, handling far fewer customers than a normal day before the pandemic.

Little signs were left on tables to keep people spaced apart as they ate, like in the photo below where a Marvel Universe-themed food area was very empty.

Staff at the park were carrying signs, encouraging people to maintain a distance of at least one meter apart, an incredibly tricky thing in a crowded place like Disneyland.

Social distancing wasn’t observed everywhere, judging by some of the photos, including in the one below, which was presumably taken during a parade or other in-park attraction where large groups gather.

One of the more curious social distancing elements put in place at Shanghai Disney is the presence of large signs on the ground that read “do not stand.” The entire thing seems counterintuitive, especially at a theme park. And it looks like other people were confused, clearly standing on the signs that said: “do not stand.”

New China TV published a video on May 9 that included a tour with the vice president of operations for Shanghai Disney Resort, Andrew Bolstein, showing how new protocols would be in place, including how every other row was being used to load vehicles on rides like Pirates of the Caribbean.

“We did various studies with our guests, and observations, and we found it was easier to tell our guests where not to stand, and then leave the empty space where they can stand,” Bolstein told reporters.

One photo, captured by a photographer for Getty Images, did show attendees of the park following the instructions correctly. But these are the exact kind of kinks you’d expect while trying a gigantic social experiment with new health protocols in a theme park.

When will the other Disney parks be allowed to follow in Shanghai’s footsteps? That part isn’t clear. But it’s obvious that Disney won’t be able to open theme parks in other countries until their coronavirus numbers decline significantly—something many countries in the world are struggling with right now.

When Shanghai Disney Resort, which opened in 2016, was closed indefinitely on January 25 the new coronavirus had infected just 881 people globally and killed 26. Today, there are over 4.1 million infected and over 283,000 killed, according to the Johns Hopkins coronavirus tracker, but those numbers aren’t distributed evenly across the world.

Hong Kong, which has controlled its infection numbers reasonably well, despite being so close to mainland China, closed the Disneyland in that region on January 26, just a day after Shanghai. The two Disney theme parks in Japan closed on January 29, and Disneyland Paris was closed much later on March 14.

The two Disney parks in the U.S.—Disneyland in California, and Walt Disney World in Florida—have made no announcements about when they’ll open back up after closing on March 14. And it’s tough to see how theme parks in those two states could open with so many cases still present. China has recorded an extremely low number of cases over the past month, but there are still cases, including 17 new cases in the country recorded yesterday. By contrast, the U.S. is still identifying over 20,000 cases per day, with almost 2,000 new deaths per day.

Americans are getting anxious to get back to normal, but that’s not going to happen until news cases per day are in the dozens, not the hundreds of thousands. And with no real strategy to accomplish that at a national level thanks to inept management by President Donald Trump, Disneyland and Walt Disney World will likely need to remain closed.