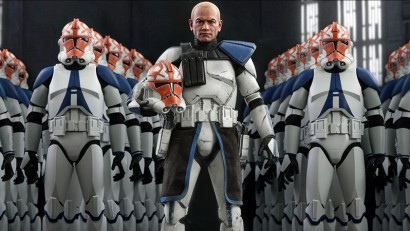 Toys and CollectiblesAction figures, statues, exclusives, and other merchandise. Beware: if you look here, you’re probably going to spend some money afterwards.

It’s good. But my head would not like to accept it, thank you.

Hot Toys teased on Star Wars Day that it would begin adding characters from The Clone Wars animated series to its lineup of extensive, incredibly detailed action figures. The company showed us approximately 90 percent of what was very obviously a rad-looking Captain Rex action figure, recreating a now-iconic shot from the show’s final season of Rex standing in front of the 332nd Clone Battalion, a branch of the 501st with their helmets repainted as a gift to Ahsoka Tano, depicting her Togruta face markings.

All very sweet until those same Clones had a switch flipped in their brains that made them want to kill her in the name of Darth Sidious. But that’s beside the point here, we’ve got action figures to gawp at!

This week, Hot Toys fully officially unveiled its 1:6-scale Rex figure, meaning that while we not only got to see all the accessories Rex comes with—his own Phase-2 style helmet with an attachable rangefinder, his blaster pistols, the aforementioned 332nd helmet, and a jetpack with booster-jet effects pieces. We also got to see Rex’s head underneath said helmet.

Which is just Temuera Morrison’s head. And? I don’t? I can’t? I do not want to?

This is not surprising information, of course. Rex was a Clone Trooper, the Clones were cloned from Jango Fett, Temuera Morrison played Jango Fett and all the Clones in Attack of the Clones and Revenge of the Sith, and will now reportedly play his clone-son Boba in The Mandalorian’s second season, to boot. So why wouldn’t Hot Toys’s Captain Rex just, well, look like Temuera Morrison but 12-ish inches tall and made of plastic?

Outside of certain examples like their recent Into the Spider-Verse offerings—which retain the animated aesthetic of the movie, in exaggerated physical sculpts, the texture of the materials, and style of the included unmasked heads—Hot Toys’ trademark aesthetic is the realistic recreation of actor and actress likenesses in this 12″ scale, to the point of eerie accuracy. Them doing this with Rex, instead of going the route of trying to recreate Clone Wars’ aesthetic, should be the expected, rather than the other way around. It’s not even the first time a Rex action figure has done this—Hasbro’s Star Wars: The Black Series line gave Rebels and Clone Wars characters realistic sculpts in line with the rest of the series when they were brought over, including Rex himself.

And yet, my brain. It is thrown. Staring into the eyes of tiny plastic Temuera Morrison, looking at his blond-dyed buzzcut and immaculately maintained eyebrows (when did Rex have the time to maintain those!?), my grey matter does not process the information that would otherwise tell my Star Wars-addled neurons that this is a picture of Captain Rex. It knows it is, but at the same time, it is afeared of a blond Temuera Morrison gazing back at it, like one would be confronting the totality of an unknown void.

Anyway, Hot Toys’ Captain Rex is due to ship out in summer 2021, and will set you back $255 should you wish to have him on your shelf. The brain breaking is free of charge, however.