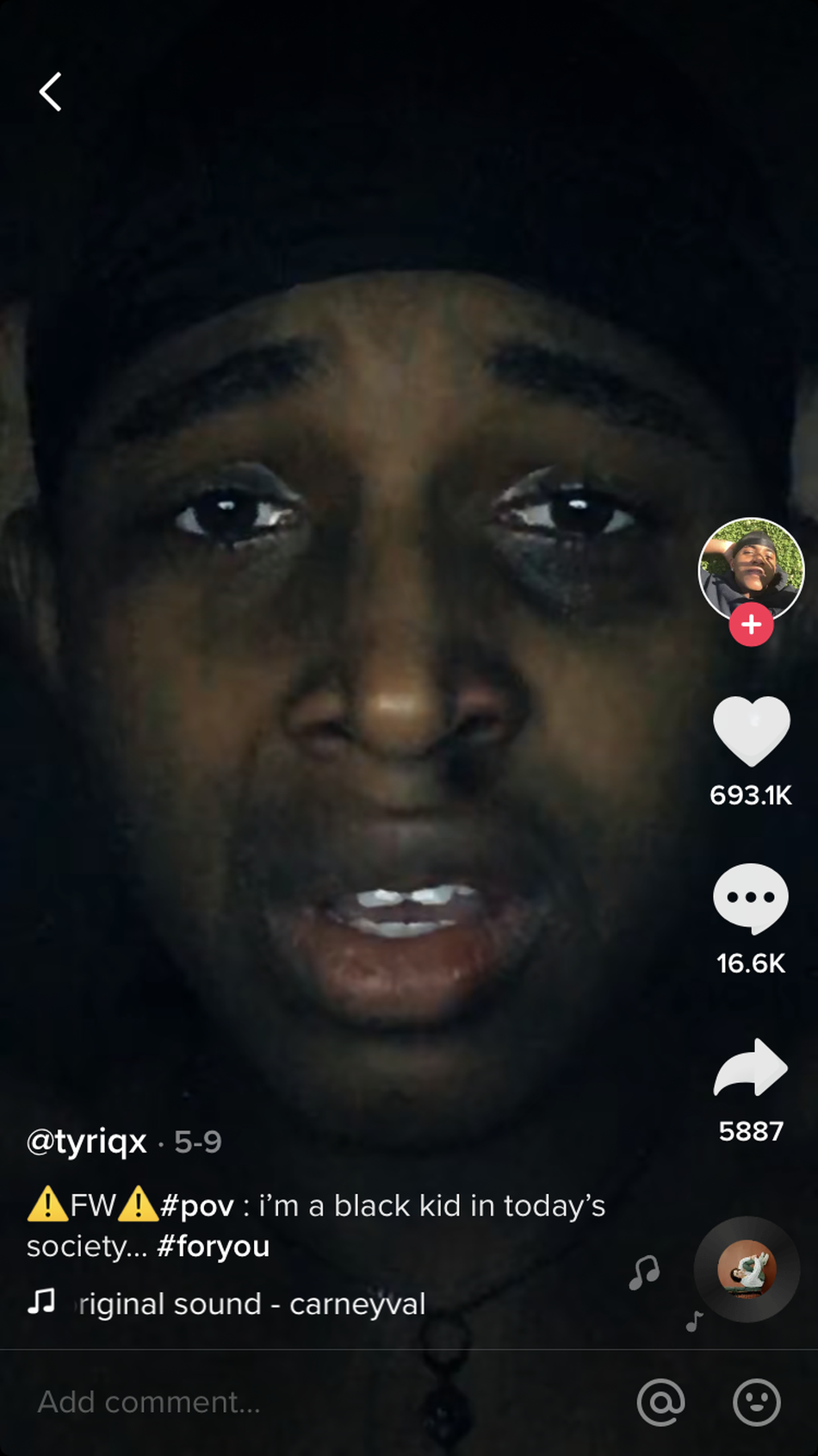 A remix of Childish Gambino’s “This is America” is now a viral anthem on TikTok used to protest police brutality against black people.

The 2018 hit referenced the fact that black Americans were disproportionately targeted by law enforcement. The music video depicts the rapper dancing with school children while police officers chase down fleeing crowds of black protesters.

Carneyval, a music producer, posted a mashup of the song with Post Malone’s “Congratulations” in late April. The haunting chords in “Congratulations” juxtaposed with the sharp hook in “This is America” make for an ominous remix, which is now included in more than 143,000 TikTok videos at the time of writing.

Black TikTok users began using the sound to highlight systemic oppression, acting out scenarios in which they were shot at for running, like Ahmaud Arbery, or pulling out a cellphone, like Stephon Clark.

TikTok user Tyriqx added the sound to a video depicting himself being held up by law enforcement. Similarly, dzekiel used the sound to demonstrate how black protesters are unjustly targeted by police.

As videos using the mashup went viral in early to mid-May, garnering millions of views and hundreds of thousands of likes, other non-black TikTok users began co-opting it to highlight other social issues. Young women used the sound to bring awareness to sexual assault on college campuses. A diabetic TikTok user added the song to a video about how much his insulin costs every month in a country without universal healthcare. A Muslim TikTok user included the song in a video bringing light to xenophobia he faced in school.

“This is America” was also wildly misinterpreted by young TikTokers. In a now deleted video, which was widely criticized by other TikTok users, user ainsleyczarnecki tried to show how progressive the United States has become. She acted out being raised by two gay fathers, practicing the freedom to protest, and voting before turning to the camera and mouthing, “This is America.” In a response video, TikTok user carter15__ rebutted each scenario by pointing out that hate crimes against the LGBTQ community are still rampant, protests against police brutality often result against even more violence against black Americans, and black voters are still disenfranchised through voter suppression.

The song’s use strayed even further from its original meaning when a white teenager used it to claim he was oppressed because he’s a Trump supporter. Other TikTok users ridiculed him for equating being bullied for wearing Trump apparel to institutionalized racism.

“You can change your political beliefs,” one user commented. “I can’t change my skin color.”

But as protests started on May 26 in response to the death of George Floyd, a black man who was killed when a white police officer pressed his knee into his neck, the song came full circle.

On Thursday, a TikTok user claimed that the platform was suppressing the movement by blocking the #blacklivesmatter hashtag and any related to George Floyd. The company denied the accusation, and in a statement posted on Twitter, said that an issue is “impacting the hashtag view counts displayed at the upload stage.” TikTok’s official Twitter account noted the the similar issue is affecting tags like #cat and #hello, and appears to be affecting words at random.

At the time of writing, the tags #blacklivesmatter, #georgefloyd and #blm are still accessible through the app’s search function.

We are aware of an issue that is impacting the hashtag view counts displayed at the upload stage. This appears to affect words at random, including terms like #cat and #hello. Our team is investigating and working quickly to address the issue.

Hashtags aren’t the only way to track trends on the platform, though — its sound feature allows users to scroll through any video that uses a sound uploaded to its database, including the remix of “This is America.” That means that even if users are having trouble viewing content about the protests in Minneapolis through the #blacklivesmatter hashtag, they can still get around it by searching through Carneyval’s viral sound to see how the song is being used in the app.

TikTok users started using the sound’s virality to draw attention to law enforcement in Minnesota using tear gas and shooting rubber bullets at protesters. A video by kareemrahma, showing officers with guns lined up on the roof of a building in downtown Minneapolis, gained over 5 million likes in the 24 hours since it was posted. Another taken by a protester alaynascibasic alleges that a police SUV pepper sprayed protesters as it drove past them. In one posted by pride.month, a protester pours milk on another protester’s face to alleviate tear gas burns.

While TikTok is known for its viral dance challenges and quippy videos, it has undeniably become a platform for organizing — even if users need to do so with a catchy song.