How the novel coronavirus is speeding the scooter apocalypse 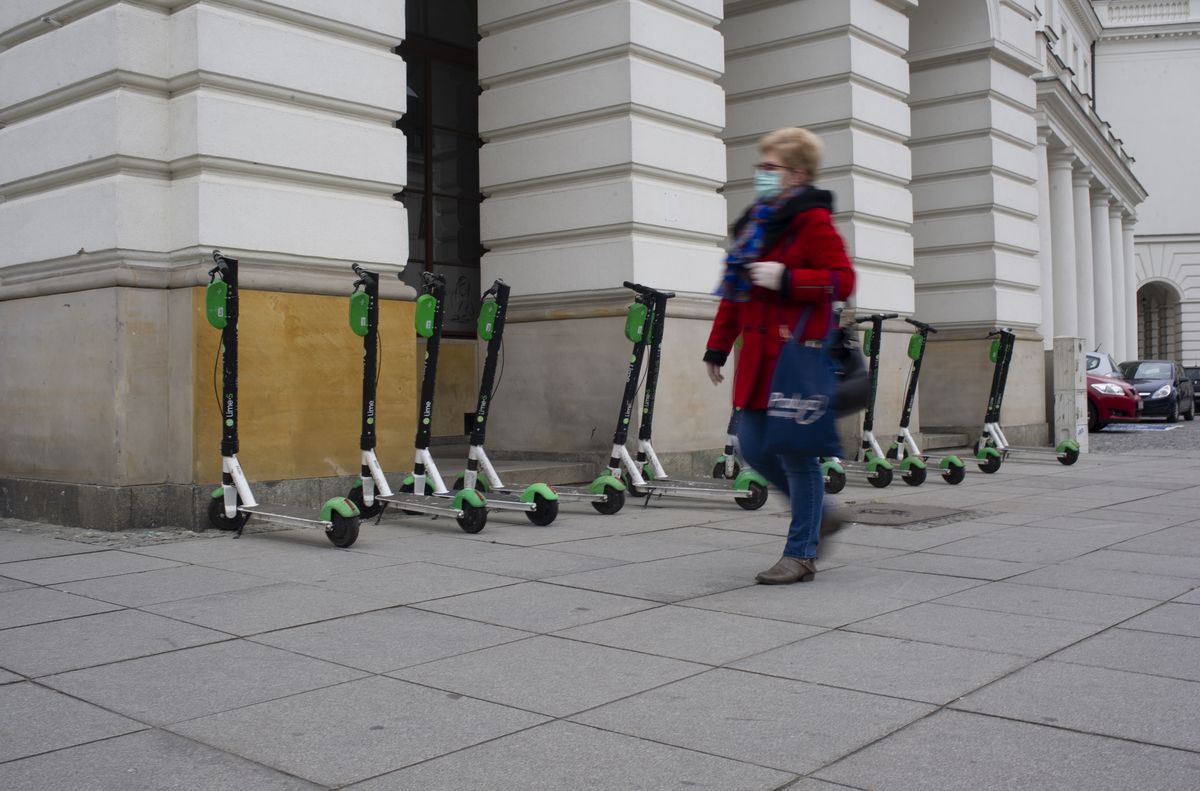 Public transportation is on life support, as the pandemic makes people less inclined to want to cram themselves into underground metal tubes with poor air circulation and nonexistent social distancing. The weather is getting nicer and some states are taking tentative steps toward reopening, even shutting down certain streets to car traffic to make more room for walking, biking, and scootering. So why isn’t the micromobility industry — shared electric bikes and scooters — thriving right now?

The novel coronavirus has brought the shared scooter and bike business to the brink of financial collapse. Demand has evaporated — an analysis of credit card data by The New York Times found that spending on scooter rentals had fallen the most of all transportation modes, by nearly 100 percent — companies are laying off employees en masse, and their previously sky-high valuations have been almost wiped out. Rather than basking in the sun and delighting in the reduced car traffic, the scooter industry is looking at end times.

“The big scooter companies are losing so much money right now,” said Courtney Ehrlichman, former deputy executive director of Carnegie Mellon University’s mobility research institute. “They’re just trying to hold their pants on. I don’t see them being really strategic. And who’s gonna throw money in to do that right now?”

“The big scooter companies are losing so much money right now.”

There are some early signs that shared mobility could survive the crisis, even come out looking better than before; one of those “it’s always darkest before dawn” kind of things. But before that happens, the scooter industry as a whole will need to shrink, as it already was doing before COVID-19. And a lot of people will probably lose their jobs.

Many already have. Bird and Lime, the two biggest companies in terms of fleet size and valuation, both just went through mass layoffs in recent weeks, eliminating around 580 full-time positions. Most recently, Uber offloaded its shared bike and scooter business Jump on Lime as part of an investment that would see Lime’s valuation drop by nearly 80 percent. Most of Jump’s 400-plus employees are reportedly on the chopping block.

Globally, the scooter and bike industry has shed over 1,000 full-time jobs in the past few months, according to online tracker Layoffs.fyi.

“They’re not going to weather it well,” said Ehrlichman, who now runs her own strategic advisor firm for mobility companies, of the big scooter companies. “They’re focused on return on investment. They’re not focused on enhancing mobility.”

But some could survive the crisis, especially if cities are willing to take a radical step. She thinks rather than imposing fees on scooter operators and limiting the size of their fleet, cities should just start subsidizing them. “I think we’re gonna see community-owned [bikes and scooters],” she said. “Not everybody can afford an e-bike. But if you pooled your money, and those e-bikes were maintained for you, you could have a fleet in your community.”

Others agree. In a recent op-ed in CityLab, Harvard Kennedy School visiting scholar David Zipper and transportation planner Marla Westervelt argued that public funding for scooter companies could help fill the gaps where bus and train service has been cut. “Should a micromobility mode that’s famous for amusing tourists and angering sidewalk users really be a priority right now?” they write. “A number of signs say yes.”

Some scooter companies could survive the crisis, especially if cities are willing to take a radical step

Unsurprisingly, there aren’t any cities that currently fund micromobility. Even New York City’s enormously successful CitiBike program, which is owned by Lyft, operates without a dime of public funding. But there are early signs that some cities may be willing to underwrite scooter sharing in order to stave off their disappearance. Cities like Denver, Tampa, and San Francisco have classified e-scooter businesses as essential. And Portland, which has said it will open up 100 miles of street space, is offering incentives to keep e-scooter sharing in operation. The city announced a unique deal with Spin, in which Portland would temporarily waive daily scooter fees of $0.20 per scooter and $0.25 per trip in exchange for Spin reducing the cost for a ride by 50 percent.

In an interview, Spin’s co-founder and president Euwyn Poon said that despite this arrangement, he doesn’t see taxpayer subsidies as a necessary part of Spin’s future.

“We’ve enjoyed our relationships with cities,” Poon said. “And it’s not financial subsidy that we’re asking for from cities, but rather, working with us … in designing sustainable operating models.” Even more important than direct subsidies is a fair way to limit how many scooter companies operate in each city, Poon says. San Francisco, for example, allows only three companies — Lime, Spin, and Jump — to operate 500 scooters each.

Poon added, “There’s no hard ask from us here for cities.”

Lyft has a successful model for bike-share — exclusive, long-term contracts with cities, no direct public funding, corporate sponsorships to help defray costs — but has yet to replicate that for its scooter business. The ride-hailing company shut down its scooter operations in six cities last year and laid off 20 workers from its scooter division.

Sean Flood, CEO of shared micromobility company Gotcha, said scooter companies shouldn’t be afraid to cut a deal with city officials. Gotcha, while not as well known as Bird and Lime, has carved out a business by mostly focusing on universities and college campuses. The company, which operates small fleets of bikes and scooters in cities like Baton Rouge, Louisiana and Mobile, Alabama, has seen ridership and revenue increase in recent weeks thanks to these preexisting partnerships. Subsidies, in addition to corporate sponsorship deals, will have to be in the mix in the future, Flood said.

“Shared mobility historically as a system has not subsidized, but why not subsidize it?” he said. “It’s not a bad word.”

Cities are slow to keep pace with the changing transportation preferences of their citizens, writes Greg Shill, a law professor at the University of Iowa. He notes that California taxes scooters at roughly 30 times the rate it taxes Uber and Lyft rides. “If California — which styles itself as both a tech innovator and a progressive champion — were deliberately trying to disadvantage green, affordable new mobility products versus their carbon-dependent, costly alternatives, it could hardly do so more effectively,” Shill says.

Even so, many cities probably won’t be in the position to waive fees or offer public funding of scooter operations in the near future. The pandemic has taken its toll on many municipal budgets, forcing cities to consider cutting transportation, parks, and education spending. Public transit agencies, which would seem like a natural fit for scooter companies to help address last-mile challenges, have seen their farebox revenue streams dry up. Meanwhile, other cities have proposed shutting down vast swaths of streetscapes to cars to encourage social distancing, a scenario that could be a huge boon to scooter riders — if they return.

As the world emerges from lockdown, coronavirus-wary commuters are likely to continue avoiding public transportation and ride-share vehicles. Scooters and bikes are seen as less risky than other shared modes of transportation. There are fewer contact points, and it’s easier to maintain a distance of six feet when riding a bike or a scooter.

Lime, which initially pulled out 99 percent of its markets in response to the virus in March and has since returned its scooters to some cities, is seeing some early positive signs. Trips in South Korea are up 14 percent, the company told Streetsblog. And riders in Columbus, Ohio and Oklahoma City are taking longer trips than they did before the pandemic — which could indicate people are mode switching from public transportation to scooters.

The scooter industry was already facing serious financial headwinds before the pandemic. Scooter sharing has always been a money loser, with most companies relying on venture capital to keep operations running. The industry has been struggling to fix its unit economics, in which the purchase price for each scooter exceeded the amount of revenue it brought in before breaking down. Lime claimed to be on the verge of profitability before the pandemic hit, while Bird said its unit economics had “dramatically improved.”

Things were shrinking in scooter-land before COVID-19, too. There were too many scooter companies, with indistinguishable vehicles and pricing schemes, and seemingly interchangeable four-letter names. Bigger players were beginning to gobble up the smaller startups. Bird acquired Scoot, Ojo absorbed Gotcha to form Last Mile Holdings, Latin American scooter companies Grin and Yellow merged to form Grow Mobility, and before last week’s deal, Uber was a minority stakeholder in Lime.

So far, Lime is the only scooter company to raise cash during the pandemic — and this round represented a 79 percent drop in valuation. Lime’s rivals are similarly desperate and likely willing to negotiate. Companies like Bird, Spin, Tier, Voi, and Dott are all holding on for dear life, praying that demand for scooters returns as the pandemic subsides.

With historically low gas prices, many urban experts are worried that cities are about to become flooded with traffic congestion. Since the shutdown, the skies have never been clearer in most cities. If the car comes roaring back post-pandemic with a vengeance, carbon emissions and smog will come with it. Shared bikes and scooters are still a better deal for cities, despite their shaky financial situation, said Horace Dediu, an analyst for Asymco who helped coin the term “micromobility.”

“The limiting function on personal driving has always been the cost, in terms of time and parking for personal vehicles,” Dediu said. “If more [people] drive, the costs rise yet further. Micromobility has the benefit of lower cost, better health and wellbeing, while still being personal transportation.”

Dedicated hosting in us. Vergleichen. Bcshelps.