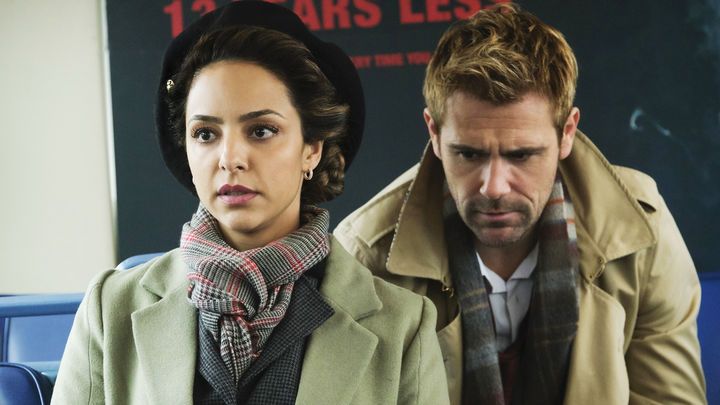 The latest season of the Arrowverse superhero show comes to an end tonight with what’s being billed as the most emotional episode of the series – read on to find out how to watch DC’s Legends of Tomorrow season 5 finale online, regardless of where you are in the world.

Previews for tonight’s episode, titled ‘Swan Thong’, point to an intriguing musical cameo and the possibility that we may be about to lose one of the show’s favourite characters.

The DC’s Legends of Tomorrow season 5 finale airs on Tuesday, June 2 at 9pm ET/PT in the US – and as usual, its home is free-to-air channel The CW. This means it can also be easily streamed on Hulu, which offers a free trial of the Hulu + Live TV package you need to watch Legends of Tomorrow without cable.

Spoiler alert: If you’re a bit behind with the show, then tread carefully over the next few paragraphs as we’ll be covering plot lines for the later episodes of season 5. Please bear this in mind and scroll down for specific guides to watching The Flash online in countries other than the US – where the episode order may be different.

With the season’s penultimate episode shocking viewers by bringing back Behrad and Zari 2.0, tonight’s finale will need to pull out all the stops to top that emotional reunion. As the two siblings are unable to exist in the same timeline without bringing about the destruction of lives, the legends are now all at risk.

To add to the intrigue, a teaser trailer for the finale shows the team encountering R&B star Sisqó as they try to escape what appears to be an oppressive realm right out of the pages of George Orwell’s dystopian novel, 1984. Can the citizens reunite and join together to fight against the Fates and take back their freedom?

Read on to find how to watch DC’s Legends of Tomorrow finale online and stream episode 14 of the hit Arrowverse show no matter where you are right now.

Those who already have a streaming service they use to watch DC’s Legends of Tomorrow season 5 finale online may find themselves unable to access it when abroad, due to pesky geo-blocking restrictions. Yes, we’re aware that most of us aren’t going anywhere in the near future, but global travel will one day resume and, god forbid, you may even be stuck abroad during these difficult times.

Fortunately, there’s an easy solution to geo-blocking. Downloading a VPN will allow you to watch tonight’s episode no matter where you are. This simple bit of software changes your IP address so that you can access episodes live or on demand just like you would at home.

Once installed, select the location of your home country and simply click connect. You’ll then be able to easily watch the DC’s Legends of Tomorrow finale online from pretty much anywhere in the world.

How to watch DC’s Legends of Tomorrow in the US

Free-to-air channel The CW is the home of Legends of Tomorrow and other Arrowverse shows in the US, which means you’re spoilt for choice when it comes to watching it online ahead of tonight’s season 5 finale – which airs at 9pm ET and PT.

If you don’t have access to The CW by way of a cable package, know that it can be watched live via Hulu in large parts of the US – plus, a FREE 1-week trial means you can watch The Flash for free while deciding if it’s the right streaming service for you.

As before, if you find yourself out of the country, you can use clever software like ExpressVPN to watch The Flash season finale and access all the content you pay for just as if you were at home.

Sky has the rights to DC’s Legends of Tomorrow in the UK, but it’s a few weeks behind the US in terms of airing new episodes on Sky One. The channel will be showing episode 11 this Thursday at 8pm, with the finale not set to air until the end of the month.

Nevertheless, Sky subscribers can watch DC’s Legends of Tomorrow via the Sky Go app, which is available to them at no extra charge on Android, iOS and PC/Mac devices, with all five season available available to watch on-demand.

Those who don’t want to commit to a lengthy Sky contact aren’t left behind, either, as they can snap up a superb value Now TV Entertainment pass – it costs just £8.99 a month and there’s even a FREE 7-day trial on offer right now. Like Sky Go, you’ll get new Flash season 6 episodes to watch just after they drop on Sky and seasons 4 and 5 in full on-demand.

DC’s Legends of Tomorrow season 5 airs on Foxtel in Australia and that means fans of the show can make use of either the handy Foxtel Now (PC/Mac/web) or Foxtel Go (Android and iOS) streaming app to watch the big finale online this week.

Yep, Flash fans Down Under have it good, as FOX8 is showing the season 5 finale – episode 14 – at 9.30pm ASDT on Wednesday, June 3. That’s more or less in line with the US release date, when you take into account the time difference, so you don’t have to worry about bumping into unwanted spoilers on the internet.

Of those two streaming options, existing Foxtel customers will want to make use of Foxtel Go, which comes free with their subscription. Anyone without a pricey pay TV package, however, should try the provider’s standalone Foxtel Now service, which offers a FREE 10-day trial.

If you happen to be going abroad and are worried that geo-blocking will stop you from watching The Flash season finale like you normally would, don’t worry – just use a VPN to point yourself back Down Under and you’ll be able to stream as usual.

How to watch DC’s Legends of Tomorrow online in Canada

CTV SCI-FI Channel is your one-stop shop for watching DC’s Legends of Tomorrow in Canada. It airs the show in tandem with CW’s broadcast in the US, so the finale will also be airing tonight at 9pm ET on the channel and coverage can be easily accessed via its website for free. If you’re on the move, the CTV app has your Legends of Tomorrow live stream needs covered and is available for a number of platforms including Android, iOS, Xbox One, Samsung Smart TV, and Amazon Fire TV devices.

If this is how you would normally watch the show but you find yourself outside of the country during the next episode, don’t forget you can get a great value VPN deal and enjoy the coverage.