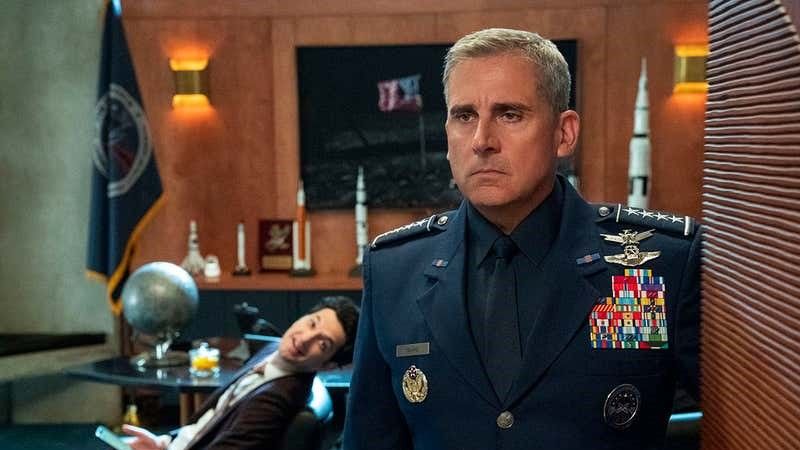 Loosely based on President Trump’s planned interstellar military branch, this new comedy show reunites The US Office’s star Steve Carell and writer Greg Daniels – read on to find out how to watch Space Force from anywhere in the world.

All episodes of Space Force are available to stream on Netflix globally now. Like some of the shows produced by rival streaming platform Hulu, the new Steve Carell show is exclusive to the streaming service and won’t be found elsewhere.

Carell plays general Mark R. Naird who has been briefed to establish the newly announced sixth branch of the US Armed Forces: Space Force. Much like Michael Scott, Carell’s character in The Office, Naird flounders as he struggles to be the perfect leader.

With a huge budget  and a chain of command clueless as to what they’re doing, Naird has to work out how to have soldiers based on the moon by 2024. Starring alongside Carell is John Malkovich, who plays warmongering scientist Dr. Adrian Mallory – who unlike Naird, wants to turn space into another battleground.

The show also boasts Glee’s Jane Lynch, Parks and Recreation’s Ben Schwatz and the late Fred Willard in one of his final roles.

Read on and we’ll show you how to watch Space Force online from anywhere – stream every episode today no matter where you are in the universe.

How to watch Space Force on Netflix

Space Force is a Netflix Original with all ten episodes of the comedy series set to drop the streaming service worldwide on Friday, May 29.

Australia: Netflix’s trio of pricing plans cost as follows Down Under: the Basic tier costs $9.99 per month, Standard comes in at $13.99 a month and the 4K-friendly Premium tier costs $19.99.

There are a only a handful of countries where Netflix isn’t available in the world, so should you find yourself somewhere like this, remember that you can always use a VPN to point yourself back to your Netflix service at home – but be mindful of local laws and consider if watching the next episode of your favorite show is worth a potential run-in with the authorities.

Avenue 5:  If you’re looking for more satirical space-based fare, then this recent offering that follows the story of an incompetent crew aboard a commercial space cruise ship will likely hit the spot. Penned by Alan Partridge and The Think of It writer Armando Iannucci, it stars Hugh Laurie as the ship’s out-of-his-depth captain who must lead the voyage home as disaster strikes.

Curb Your Enthusiasm:  Now in its 20th year on air, the show follows a fictionalised version of former Seinfeld writer Larry David as he flounders from one disastrously awkward social situation to the next.

Schitt’s Creek: This cult Canadian sit-com has just just gone out with a bang with its sixth and final season. Created by comedy veteran Eugene Levy (American Pie) and his son Dan, the show follows the Rose family, who are newly broke millionaires hilariously struggling with small-town life.

The Good Place: This fantasy comedy series created by Michael Schur whose hit-filled track record includes The Office, and Parks and Recreation. The show follows Eleanor Shellstrop (Kristen Bell), who arrives in the afterlife and is welcomed by Michael (Ted Danson) to “the Good Place”, a heaven-like utopia he designed, as a reward for living a good life. Eleanor realizes that she was sent there by mistake, with hilarity ensuing as she tries to hide her morally imperfect past.

How to watch Space Force from outside your country

Space Force is ready to be rolled out at a time when people are desperate for something funny to watch. If you’re looking to get stuck in but find yourself stuck abroad in the lockdown in a country where Netflix isn’t available, you might worry that you’ll be unable to watch show using your normal streaming service, due to frustrating geo-blocking restrictions.

Fortunately, there’s an easy solution. Downloading a VPN will allow you to watch Space Force online no matter where you are, by changing your IP address to one in another location.

Once installed, select the location of your home country and simply click connect. You’ll then be able to easily watch Space Force from pretty much anywhere in the world.

Can I watch Space Force for free?

However, if you want to see the glass as half-full, one of the best things about Netflix is that your subscription covers absolutely everything the streaming platform has to offer. From just $8.99/£5.99 a month, you get the whole lot – you’re not going to find that some shows are included, unlike other unnamed rival services that still hold subscribers to ransom.