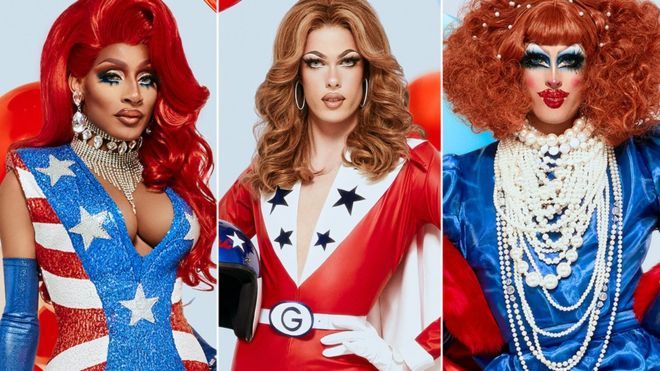 A lip sync competition over Zoom? Given the times we live in, we’ll sissy walk to anything that lets Mama Ru crown a new queen, squirrel friends! It might not be how anyone ever imagined it, but finalists Crystal Methyd, Jaida Essence Hall and Gigi Goode are all so fabulous, we know they’ll make tonight’s remote finale every bit as glamtacular as it could ever be. Sashay down the page to find out how to watch the RuPaul’s Drag Race season 12 finale and stream it online tonight from anywhere in the world.

The season 12 finale of RuPaul’s Drag Race goes out on VH1 on Friday, May 29 at 8pm ET and PT –  which means that the best value streaming access is via Philo. It costs just $20 a month and gets you access to the channel as part of its core package.

Yes, tonight’s finale is going to be virtual lip sync extravaganza – and there are some very special guests to expect, too. Chief among these is RuPaul season 11 winner Yvie Oddly, who will be on hand to pass the crown to the new queen – complete with $100,000 prize. There will also be Nina West to award $10,000 in cash to this year’s Miss Congeniality, which recognizes the contestant considered to be the kindest in the current run.

Of the contestants, Goode has to the favorite heading into tonight’s finale, having won the most challenges throughout the season. Hall can’t be discounted, though, as they’ve werked the highest of heels, most bombastic wigs, and fiercest makeup this year. Crystal Methyd is everyone’s favorite underdog and everyone will be secretly rooting they slay the competition at the last.

Yes, it’s been an epic season 12 for RuPaul’s Drag Race, so forget that the Covid-19 crisis means tonight’s episode will be a remotely streamed affair. Instead, buckle up for another raucous finale and Viva La Ruvolution! Here’s how to watch the RuPaul’s Drag Race season 12 finale online, no matter where you find your glorious self right now.

If you find yourself far from home when the latest episode of RuPaul’s Drag Race drops – remember business trips and vacations? – don’t let geo-blocks get you down. If you’re in a country where this content isn’t available, you can install a VPN so you can watch season 12’s Drag Race finale online using whatever service you normally subscribe to and use at home.

This piece of software changes your IP address, so you can access tonight’s episode just like you would from the comfort of your own couch.

Of the hundreds of available VPNs, our favorite is ExpressVPN. It’s quick to connect to servers, straightforward to use and secure. It’s compatible with Apple TV, Amazon Fire TV Stick, the Xbox, PlayStation, iOS and Android software, and many other devices.

What makes ExpressVPN particularly enticing is its flexible 30-day money back guarantee. Even better, if you sign up for an annual plan you’ll get a 49% discount and 3 months extra FREE – a brilliant deal on an essential bit of kit.

Once downloaded, search for the location of your home country or select it from the pre-defined list. Click connect and condragulations!

How to watch RuPaul’s Drag Race online in the US

There are loads of ways to enjoy the sassiness of the RuPaul’s Drag Race season 12 finale. If you’ve got cable, you can watch live on VH1 this Friday from 8pm ET. You can also stream the show via VH1’s online platform, but you’ll need to enter your cable provider details to do so.

Alternatively, you can get VH1 without cable with services like Sling. If you’ve cut the cord completely, here’s a rundown of all the OTT services that will allow you to stream RuPaul’s Drag Race:

If you have cable, you can catch RuPaul and his rhinestone-clad crew on Crave at 8.35pm ET or on OUTtv at 8pm ET. Otherwise, both have their own OTT services:

· OUTtvGo: new episodes from season 12 of Drag Race will be available to stream from 9.30pm EST, just an hour and a half after their US debut. Subscription is $3.99 CAD a month or $39.99 for an annual subscription.

· Crave: subscribe to Crave On-Demand for $9.99 CAD (plus tax) to get your fill of cutting barbs from the mischievous Ru, with new episodes available online and on the Crave app from 9.30pm EST and 6.30pm PST. A free trial of 7-days is available too.

How to watch RuPaul’s Drag Race online in the UK

So, Netflix is the only way UK viewers can secure a seat at the Drag Race. New episodes come online first thing Saturday mornings, half a day later than in the US.

If you’ve already got a Netflix subscription, then it’s certainly the option you’ll need to go for. But anyone from North America travelling or holidaying in the UK should remember they can tap into their local TV coverage and watch the Drag Race live by using a VPN.

How to watch RuPaul’s Drag Race online in Australia

So, if you’re find yourself abroad in Australia and want to watch RuPaul’s Drag Race online from Down Under, you’ll need to use a VPN service like ExpressVPN as detailed above to access the on-demand streaming service you normally would at home.

WOW Present Plus is the self-dubbed “official streamer of all things drag” and comes to us from World of Wonder, the production company behind RuPaul’s Drag Race.

As such, it has an impressive catalogue of RuPaul shows – including the latest season 12 episodes – available to stream all over the world including in markets like India, South Africa, the UAE and many other countries. A full list of what’s available and where can be found here.

It’s a pretty niche offering but if drag shows are your thing, you’ll find it also hosts the likes of UNHhhh, Untucked, and Transformations – all for the ultra-affordable price of just $3.99 a month. Best of all, there’s a FREE 7-day trial on offer so you can shantay on over and check it out for yourself.