I Just Remembered That I Ate a Murder Hornet Once 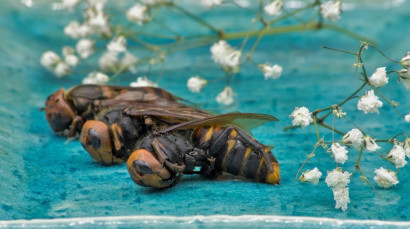 When I first saw an image of the Asian giant hornet, now famously referred to as the “Murder Hornet,” my first thought was “I’d probably eat that.” My second thought was, “wait, I probably have.”

Asian giant hornets are exactly what they sound like: big hornets that are native to East, South, and Southeast Asia. People are talking about these bugs because last winter, two locations in the Pacific Northwest reported finding dead specimens of the insects. People are really talking about them because over the weekend, the New York Times called them “murder hornets.” But back in 2017, I referred to it as “a comically large insect on a piece of lobster” and then ate it—and enjoyed it. I don’t remember what it tasted like because I drank a lot of alcohol that night, but I have photo evidence. (The enjoyment was documented in my notes.)

It’s not clear how Asian giant hornets arrived in the United States, but National Geographic reports that they likely came over in shipping containers. Yes, they are big and sound scary, and yes they kill around 50 people in Japan annually, but they’re not actually as harmful to humans as they sound; they’re not aggressive to people, and will only sting when they feel threatened, according to a Purdue University fact sheet. The murderous nickname comes from the fact that they’re good at killing their prey. Plus, they’re a delicacy in parts of Japan—while this isn’t published anywhere, I have a hunch that some of those who died were attempting to harvest the bugs and their nests for food.

You’re unlikely to come into contact with these bugs unless you live in the Pacific Northwest, so the giant hornet you encountered in your own backyard was probably a native hornet or wasp species—please don’t kill it.

If you’re going to be concerned, it’s probably better to worry about our native bees, who did not evolve defenses against these bugs.

But more importantly, I ate them once! Chef Joseph Yoon, founder of Brooklyn Bugs who served me said hornets, told the New York Post that they had a flavor like popcorn without the butter. Again, I don’t remember the flavor myself because no one told me that I’d have to remember the flavor of a bug on a night that I probably ate ten other species of bugs, but I do remember asking for, receiving, and enjoying a second helping.

Yoon told Gizmodo that our treatment of these insects is a shame—the first thing we think is to eradicate them and render them inedible with pesticides. But going straight to poisoning without considering other uses of the bugs is a missed opportunity, similar to how locusts are treated with chemicals rather than treated like potential food sources as they once were. “There’s a lot of opportunities we’re missing in how we can maximize and utilize insect protein,” Yoon told Gizmodo. “It would be great if an entomologist could collect these hornets for me, we could make a big feast.”

A New York Times article on the matter recommends against eating the “murder hornet” if you encounter one in the wild. I guess I agree—don’t go trying to catch them with a butterfly net. But people eat them in Japan as well as in America and I’m still alive to tell the tale, so I’m not going to tell you not to try one if you can. After all, there are a whole bunch of great-tasting edible insects out there like chapulines, sikworm pupae, and black ants, plus insects are a good source of protein and other nutrients. Murder hornets seem like a great start to your bug-eating journey!