In Minneapolis, Neighbors Are Mobilizing—Offline 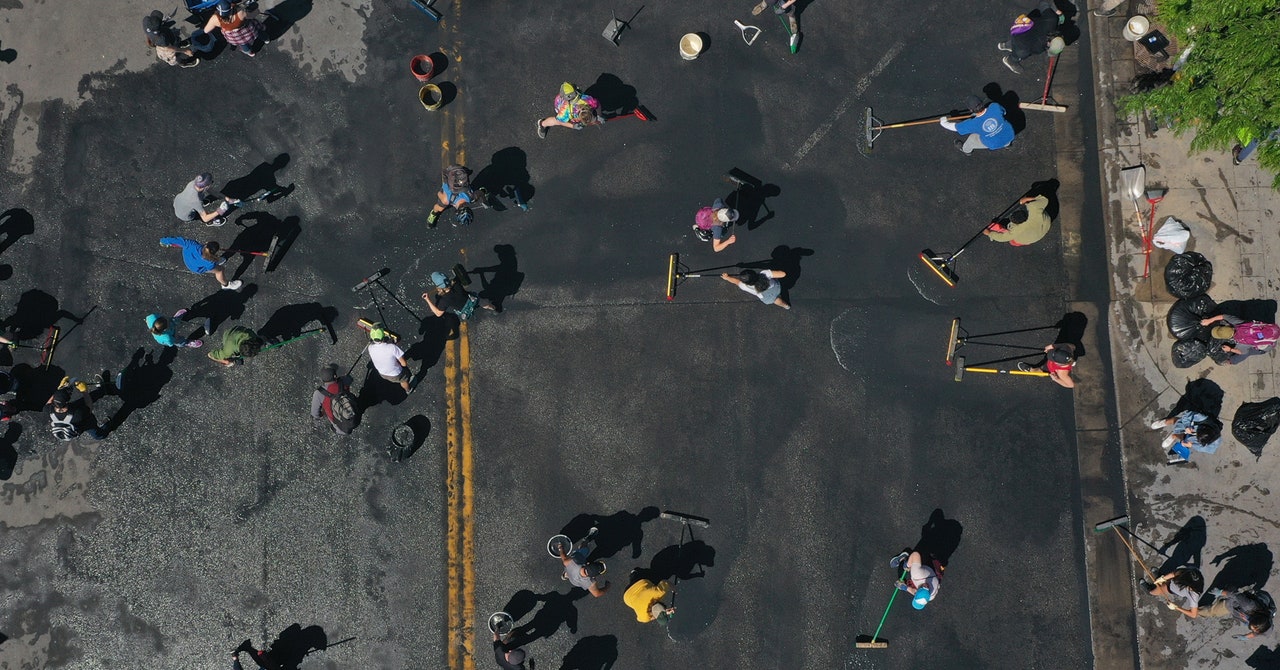 People stepped forward to an underpowered microphone to share ideas about how best to prepare for the evening. A man who’d served in the Marines and now works security told people the best thing they could do was to turn on their lights and just be present. “If it’s an empty area, something is going to happen,” he said. A couple who’d just biked over from a similar gathering of more than 1,000 people in nearby Powderhorn Park shared tips from their meeting—like moving in trash cans or filling them up with water so their contents couldn’t easily be used to set fires, and clearing away anything that could be used to break a window.

Then Sidie-Wagner divided everyone into groups by block to trade contact information and sign up for patrol shifts. People had lots of questions: “Should we use our cars as barricades?” (Probably not; that’d be a fire hazard and wouldn’t stop people who are on foot.)

“Can we use messaging apps to talk to each other?” (Yes, but try to get everyone on an encrypted app, like Signal.)

“Will we be breaking curfew if we’re in our yards or houses?” (No, per the department of public safety. However, that didn’t stop police officers in riot gear from firing non-lethal rounds at residents keeping watch from their porch in the nearby neighborhood of Whittier later on Saturday night.)

When the block groups dispersed, about an hour later, each one received a fire extinguisher, with some groups who lived near vulnerable older commercial buildings without sprinkler systems taking extras. One woman who’d been taking detailed notes on the impromptu safety plan volunteered to print out paper versions to hand out door to door.

Will Drescher, a 24-year-old drug counselor, was planning to go back and tell the people in his building about what he’d heard at the meeting. He wasn’t sure whether to be more nervous about extremists or police surveillance, but he’d had his phone in airplane mode for the past few days and hadn’t been texting with his roommates. “My DNA is just fried from all this. I really think I’m coming apart,” he said. “But I know that’s how many of our city’s black and brown citizens feel every day.”

In North Minneapolis, where the majority of neighborhood residents are black, people were also mobilizing on Saturday afternoon for what they feared would be a long night. On Thursday, fires had been set at several black-owned businesses on West Broadway, about six miles away from the protests. Firefighters, overwhelmed by the myriad blazes, took hours to respond, and many cherished institutions were destroyed, including the Fade Factory barbershop, and a Walgreens, the neighborhood’s only pharmacy. Phillipe Cunningham, the city council member representing North Minneapolis’s 4th Ward, was out that night driving around, responding to calls from constituents who said they’d seen groups of white men setting fires. Cunningham said he didn’t see a single police officer the entire time. “It was eerily quiet. There were no protests. No break-ins. And yet buildings were burning,” said Cunningham. “That was a huge red flag for us, and it became apparent that we were going to have to figure this out for ourselves.”

With the help of his husband, Lane, Cunningham got to work identifying a list of critical, high-risk businesses and recruiting people to watch over them through an open Facebook page. More than 100 people volunteered. Unlike residents in Sidie-Wagner’s neighborhood, Cunningham said he wasn’t afraid to leverage social media to get people involved, because the neighborhood is so tight-knit that anyone out of place would be immediately apparent. “I don’t blame folks in South Minneapolis for being cautious, because the fact is infiltrators have pretended to be community members during protests and other high-tension moments,” he said. But the two sides of the city are experiencing two completely different crises right now, and responding requires two different strategies, he said: “We’re seeing very targeted destruction, not this wanton smash-and-burn approach. So it was more important for us to get folks out in numbers to keep an eye on things.”