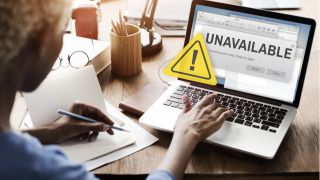 The increase in sustained Internet traffic brought about by coronavirus lockdown measures has led to speculation infrastructure might crumble under the burden.

Although cloud-based services (such as Zoom and Microsoft Teams) have experienced outages – likely as a result of increased traffic – and broadband providers have suffered blips in service, the UK is yet to experience significant downtime outside of usual margins.

The company detects network performance issues by actively probing networks from thousands of vantage points around the globe. It takes billions of measurements each day, detecting instances in which traffic is terminating within ISPs and the networks of public cloud providers, UCaaS providers, and edge service providers.

According to ThousandEyes, this outage detection mechanism is highly specific, enabling isolation of traffic termination incidents down to the interfaces of the infrastructure involved.

How do you set about detecting outages?

While packet loss of any level can be potentially disruptive to users, ThousandEyes defines an outage as an incident involving 100% packet loss, where traffic completely terminates at some point within a network.

Since lockdown measures were introduced, how would you assess the performance of UK Internet infrastructure?

The performance of Internet infrastructure in the UK has been varied over the course of lockdown, but generally speaking, it has held up well.

When compared globally, UK outages have remained low overall, standing at 21 in the first week of lockdown, with the second week rising to 28. A significant reduction was seen in the third week with only 10 outages, before we observed a slight increase in the fourth week with 13.

How is UK Internet faring in comparison to other countries?

About a third of all outages in the first quarter this year occurred in EMEA. Although the duration and scope of many of the outages suggest they were the result of network operators optimising performance as traffic levels increased, we have also seen a clear spike in outages among collaboration app network providers, including video conferencing services.

Comparatively speaking, the UK’s Internet has fared well. We saw outages spike in mid-March, but when a second global elevation occurred in early April, the UK was minimally affected.

What kind of damage was caused by the recent outages you identified?

The impact of outages can vary depending on location, time of day, and scope of the outage. In general, when Tier 1 ISPs, broadband providers, and large transit providers experience outages, the impact of consumers and business can be significant.

The recent Tata Communications outage had far-reaching implications geographically, as did last week’s CenturyLink outage, which caused Merrill Lynch to publicly report on disruptions to its brokerage business. Many other large businesses experienced service disruption throughout the outage. Taken together, the financial impact may well have been in the millions of dollars.

What have been the primary causes of outages in recent weeks?

Outages can occur for many different reasons, including infrastructure failure, fibre cut, and configuration error, making them hard to predict.

What are the greatest challenges currently facing ISPs?

Overall, ISPs have performed well given dramatically increased network usage. As traffic volumes increased, many reported an increase in requests for bandwidth and connectivity from their customers and peers. Responding to a large number of service requests may have posed a challenge for some providers.

ISPs are also under greater scrutiny, given the dependence that users now have on the Internet. Even issues unrelated to network usage, such as fibre cuts, can bring an unwelcome spotlight.

Outages are, however, an inevitability even under normal Internet conditions, and sound network strategy and operations will continue to be the best methods to limit their occurrence.

Do you anticipate any changes to the way services are consumed going forward?

The overnight transition to a remote workforce and customer base has made one thing very clear for a lot of enterprises – they’re reliant on a well-functioning Internet to power all of those online services and applications that are core to employee and consumer experiences.

Going forward, we may see a change in the way businesses invest in and consume some Internet services. ISPs may also examine their service and investment prioritisation given the heavy utilisation of consumer networks.

As The GameCube turns 20, we look back on Nintendo’s beloved, maligned, one-of-a kind console Nintendo GameCube and controller

As The GameCube turns 20, we look back on Nintendo’s beloved, maligned, one-of-a kind console Nintendo GameCube and controller