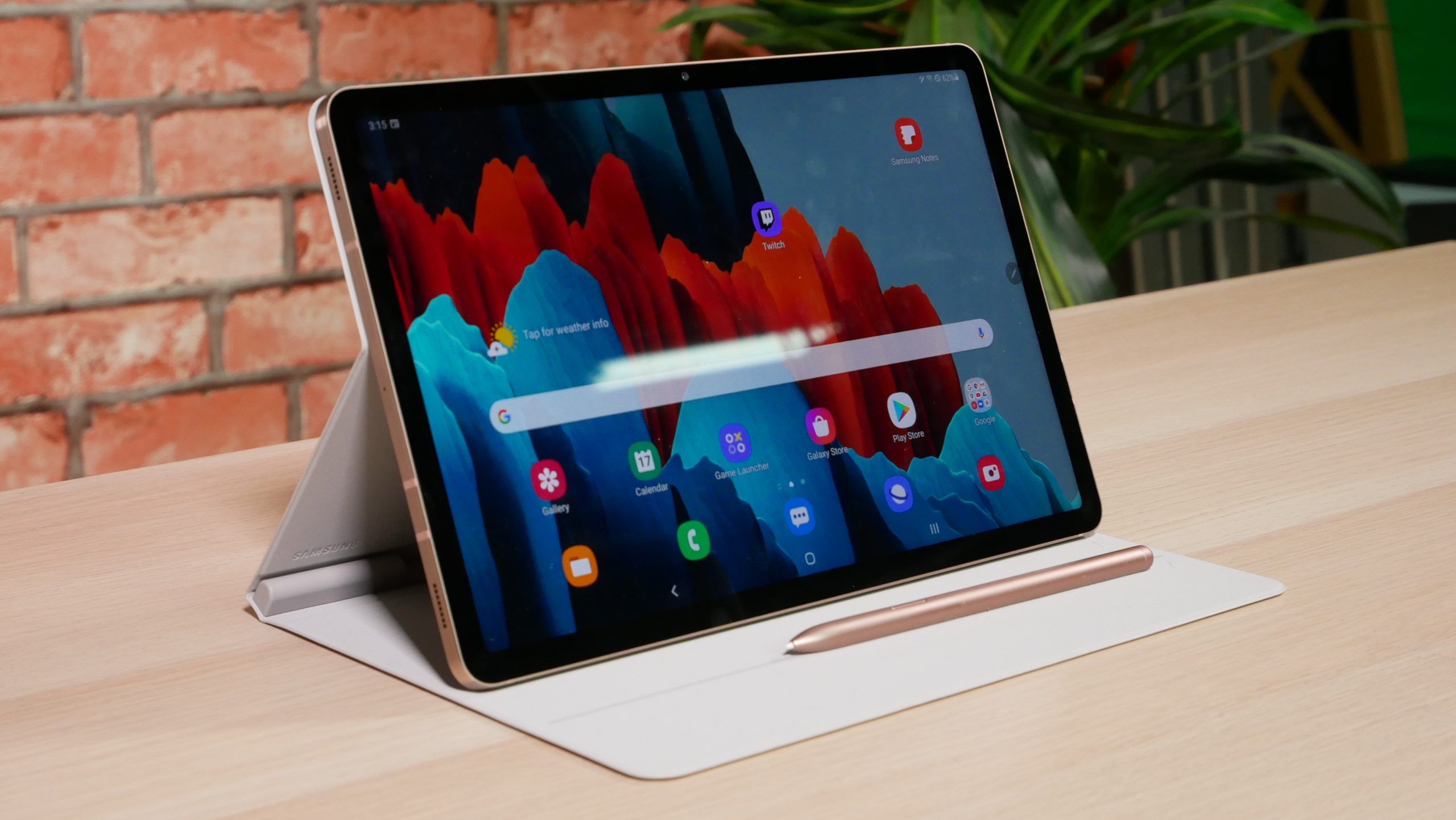 Apple versus Samsung is a somewhat constant comparison, but the arena is usually the crowded smartphone market. Tablets, however, have almost always been dominated by Apple, with the entire sector almost being swallowed whole by one iPad or another.

That’s not to say the battle is won, though, and Samsung’s latest efforts, the Galaxy Tab S7 and Samsung Galaxy Tab S7 Plus, might just have what it takes to put Android tablets back in the limelight.

But how do they stack up to Apple’s iPad Air 4, the latest model in its light and powerful Air range? Let’s find out.

The iPad Air 4 starts shipping in October, whereas the Tab S7 and S7 Plus are available now.

In many ways, both the iPad Air 4 and the Tab S7 range seem to have been inspired by Apple’s iPad Pro 11 (2018) refresh. Both offer rounded corners and narrower bezels than you’ll find on most tablets, and if you put them side-by-side, it might take a second to spot the differences.

Apple’s newest Air comes in the usual Silver, Space Gray and Rose Gold options, but also adds Green and Sky Blue to the mix. Meanwhile, Samsung is a little more conservative, offering ‘Mystic’ Bronze, Black, and Silver for both the Galaxy Tab S7 and S7 Plus.

While the iPad Air 4 offers a single 12MP wide camera module, the Galaxy Tab S7 range offer two rear cameras – a 13MP main one and a 5MP ultra-wide one, but we’ll get to those later.

On the top edge of the iPad Air 4, you’ll find a new lock button. While it still wakes the device, just as it would on an iPad Pro, here it cleverly doubles as a Touch ID sensor. While that means no Face ID (as you’d find on its more expensive sibling), the front-facing camera does still offer 7MP photos and video recording.

You’ll also note the respective connectors on each device for their own attachments, such as keyboards, and yes, the iPad Air 4 supports Apple’s Magic Keyboard, if you’re so inclined, as well as the second-generation Apple Pencil.

As for the screens, the Samsung Galaxy Tab S7 and Samsung Galaxy Tab S7 Plus diverge pretty drastically here. The S7’s 11-inch display is a 1600 x 2560 LCD screen, and while it’s a good canvas for whatever content you throw at it, there’s no denying that the S7 Plus is the golden child here.

Offering a stunning 12.4-inch AMOLED display, it’s incredibly bright and bold, with a resolution of 1752 x 2800 and an aspect ratio of 16:10. That means it’s a little shorter when using it in landscape, but you’re unlikely to notice too much.

The standard Tab S7 also has this aspect ratio, and both slates offer a 120Hz refresh rate, which makes animations and inputs feel buttery smooth.

Meanwhile, Apple’s slate offers another Liquid Retina display (read: LCD), and it has a 1640 x 2360 resolution. It’s also 10.9-inches, so it’s a little smaller than even the base Galaxy Tab S7.

Apple has made big strides with its camera hardware and software in recent years, but the Galaxy Tab S7 and Tab S7 Plus are the clear winners, at least on paper, offering both 13MP and 5MP sensors.

The 5MP is an ultra-wide option, allowing you to capture more of a scene in a single shot. If you’re the kind of person that reaches for your tablet rather than your phone, then it’s hard not to recommend the Samsung Galaxy Tab S7.

That’s not to say the camera is a dud in the iPad Air 4. Its 12MP sensor is great for taking photos in the daytime, but without a flash or the Night Mode found on the iPhone 11 range, it’s not going to be your go-to for photos after dark.

In terms of video, both are capable of recording in 4K at 30fps, but the iPad Air 4 offers 60fps recording, too.

As for battery, Apple hasn’t revealed the iPad Air 4’s battery size, but has said the slate offers 10 hours of battery life, dropping to 9 when using cellular.

Samsung’s Galaxy Tab S7 meanwhile has an 8,000mAh battery while the Galaxy Tab S7 Plus has a massive 10,090mAh one. Despite that, Samsung claims the basic Tab S7 lasts longer – apparently holding out for up to 15 hours of video playback, compared to 14 on the Tab S7 Plus. That can presumably be explained by the larger, higher resolution screen on the Plus model.

Unlike Apple, both of Samsung’s slates also support fast charging, but all of these tablets offer a USB-C port.

The iPad Air 4 is powered by Apple’s new A14 Bionic chipset, with a neural engine that allows for machine learning. While that may sound like a series of buzzwords, what it boils down to is that the iPad Air 4 is very fast, and pretty clever, too.

Apps that take advantage of machine learning will use AI and algorithms to empower users, be it allowing for finer photo editing, or increased graphics performance.

iPadOS 14 may be a modest update, but it does contain some great new features that Android devices can’t quite match up to yet. If you buy an Apple Pencil, there’s the new ‘Scribble’ function that lets you write text in any text field and have it automatically converted to digital text, among other things.

Then there are the redesigned Home and Notes apps, a new Safari translation feature, and an increased focus on privacy within the App Store. You’ll also get mouse and keyboard support.

Meanwhile, the Samsung Galaxy Tab S7 and S7 Plus each have an octa-core Snapdragon 865 Plus chipset, which also features a neural processor, one that’s 77% faster than is featured in the Samsung Galaxy Tab S6 that precedes them. These slates also run on Android 10, which brings with it enhanced privacy settings, live transcriptions, and more.

The Tab S7 and S7 Plus also come with a new and improved S Pen, the company’s own stylus device. It offers incredibly low latency and attaches to the back of the tablet for safekeeping. In terms of functionality, it’s similar to the Apple Pencil, but it’s nice that it comes with the tablet rather than having to buy it separately.

Also, with the Samsung tablets you can expand the storage by up to 1TB with a microSD card, whereas iPad Air 4 owners are stuck with whatever they choose when purchasing.

As noted above, you can also optionally get 5G with the Samsung Galaxy Tab S7 Plus, while the iPad Air 4 only offers 4G.

As with any Apple versus Samsung comparison, there’s no real loser and it may come down to which operating system you prefer.

Then there’s the price, as Samsung’s offerings cost more than the iPad Air 4, but if you’re likely to purchase an Apple Pencil on top of the latter, things even out a little more.

The iPad Air’s latest revision improves its design, but it remains a fairly modest upgrade outside of a not-insignificant performance bump. Meanwhile, the standard Samsung Galaxy Tab S7 is blown out of the water in many regards by its ever-so-slightly larger brother with its beautiful AMOLED panel.

If you’re a fan of Apple’s ecosystem, the choice is simple, but if you’re feeling adventurous, Samsung’s Galaxy Tab S7 and Galaxy Tab S7 Plus are very tempting.