Is it going to be Ambani vs Amazon? 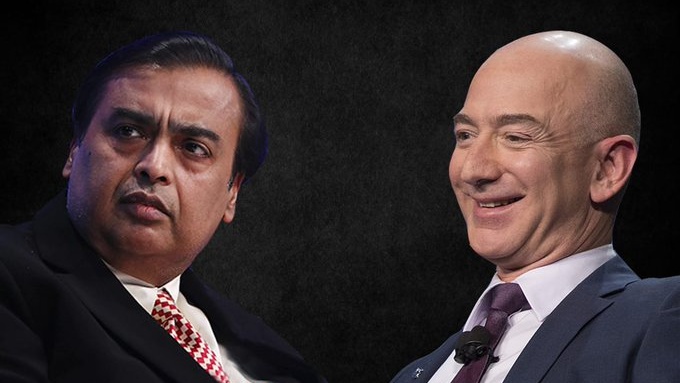 If it were a ticketed event, they would bill it as Asia’s richest man facing off against the world’s richest man in a battle of supremacy in one of the toughest markets in the world — India.

Essentially, that is what it is coming down to as the Mukesh Ambani-helmed Reliance Industries is set to cross swords with Jeff Bezos-run Amazon, with the Kishore Biyani-held Future Group of Companies being the battle arena, as it were.

In a season when plenty of things have happned for Reliance Industries and Jio Platforms, it has emerged that the Ambani firm is in advanced stages of talks to buy into units of Future Group, which as it happens, is already in a tie-up with Amazon.

If this is not taking the fight to the enemey camp, then what is?

As per multiple media reports, Reliance Industries, in a bid to further its e-commerce ambitions, is planning to buy stakes in Future Group’s Future Retail and perhaps another unit, too.

As a twist in the tale, the Future Group is also in talks with Amazon, which wants to increase its existing stake.

The Future Group, which is in some financial strife, wants to close the deal early so that it is rid of its troubles.

Future Retail operates some of India’s most popular retail chains and is in more than 400 cities in every state of the country through digital platforms and over 1500 stores that cover over 16 million square feet of retail space.

Though a group with enormous potential, it is now under severe financial strain. The debt book of Future Group’s six listed firms increased to Rs 12,778 crore as of September 2019 from Rs 11,463 crore in March 2019. Market news says that the Future Group needs Rs. 6,000-8,000 crore to stay afloat.

And earlier, the better.

Hence the company is holding talks with various players, but the spotlight is understandably on Reliance and Amazon.

Amazon is betting big on India. It has been considerably increasing its Indian presence slowly. Recently it rolled out Amazon Food Deliery in Bengaluru. And of course, its key business is Amazon online platform, on which it wants to retail every product possible.

Amazon already holds an indirect stake of 1.3% in Future Retail. (In August last year, Amazon agreed to purchase 49% of one of Future Group’s unlisted firms, allowing it to buy into Future Retail after a period of between three and 10 years.)

The ties between the two companies further strengthened after Amazon became the authorized online sales channel for Future Retail’s stores that sell everything from groceries to cosmetics and apparel.

Now, Amazon wants to add its investment in Future Retail for a holding of as much as 49%.

If the deal actually happens, Amazon can consoildate its position in the Indian market, as it has already pledged to invest $5.5 billion in the country.

Amazon, which got bested in China by Alibaba, wants to have better results in India. Hence, it has been pretty aggressive in its approach in India so far.

Reliance not ready to roll over

It is no secret that Mukesh Ambani wants to build an Indian Alibaba that will let offline merchants and kirana stores sell their goods online to Indian consumers.

Reliance is hoping to tap into its 10,415 retail stores across 6,600 cities and leverage its Jio subscriber base of 380 million to reach the masses.

The company built out the connection layer first, providing affordable data and even selling phones for consumers to go online, and is now developing the marketplace by providing hardware (point of sale machines).

Having put in all the hard yards over the last 3-4 years, Reliance now wants to move in for the kill. It has gone for some over-the-top, aggressive investment soliciting, and sold close to quarter of its stake in Jio Platforms and raised a whopping $15.2 billion in just over two months time.

Reliance Retail, as of now, operates a network of 11,784 stores covering 28.7 million square feet and reported a revenue of Rs 38,211 crore in the January-March quarter.

Thanks to its sustained efforts, Reliance Industries has become debt free much ahead of its schedule.

Reliance Industries has raised over Rs 168,818 crore in just 58 days through:

The combined capital raised has no precedence globally in such a short time. Both of these are also unprecedented in Indian corporate history and have set new benchmarks.

Along with the stake sale to BP in the petro-retail JV, the total fund raise is in excess of Rs 1.75 lakh crore.

Reliance has raised over $22 billion in 58 days, via rights issue and investments by @Facebook, KKR, Saudi’s PIF and more. In the middle of a global pandemic and Indian lockdown, one of the strictest in the world. Incredible.June 19, 2020

Mukesh Ambani, in a press release said, “Today I am both delighted and humbled to announce that we have fulfilled our promise to the shareholders by making Reliance net debt-free much before our original schedule of 31 March 2021.”

He added: “Over the past few weeks, we have been overwhelmed by the phenomenal interest of the global financial investor community in partnering with Jio.”

Ambani is now ready for the next haul for Jio and Reliance Retail, which he said at the company’s AGm early this year, “will induct leading global partners in the next few quarters, and move towards listing of both these companies within the next five years.”

The e-commerce space in India is very attractive for all big players. With 500 million internet users and e-commerce growing 30% a year, experts expect online retail in India to become a $200 billion opportunity by 2027.

Basically, there should be enough space for multile players. But both Amazon and Reliance have shown that they don’t like competition in the spheres they operate.

As personalities Bezos and Ambani are different, but both are no-nonsense guys and don’t brook any threat to their market suzerainty.

In India, Amazon has also got to be wary of government rules. Being a local player, Reliance gets to enjoy more benefits than Amazon, which is why Amazon wants to ride piggyback on Future Group and reap the benefits of being an Indian competitor.

The main focus may be on warehouses. Foreign-funded firms aren’t allowed to hold e-commerce inventory in India. That’s a disadvantage for Amazon, since it prevents the firm from fully capitalizing on the strengths of its vaunted logistics operation, seen as one of its most decisive edges in the US.

And this is a good moment to point out that Amazon is also in discussion for taking a controlling stake in Kishore Biyani-promoted Future Supply Chain Solutions (FSC), which is a third-party supply chain and logistics service provider that offers warehousing facilities also.

So there are many layers in this Ambani vs Amazon battle for stakes in the Future Group.

Reliance, needless to stay, is aiming for a controlling stake in the Group, so that it can call the shots from all corners.

As we said, Reliance vs Amazon is basically a variation of immovable object against unstoppable force.

They say Jeff Bezos could be world’s first trillionaire by 2026, Mukesh Ambani by 2033.

Both the industry captains would, however, value who gets to win the battle for the Indian market.