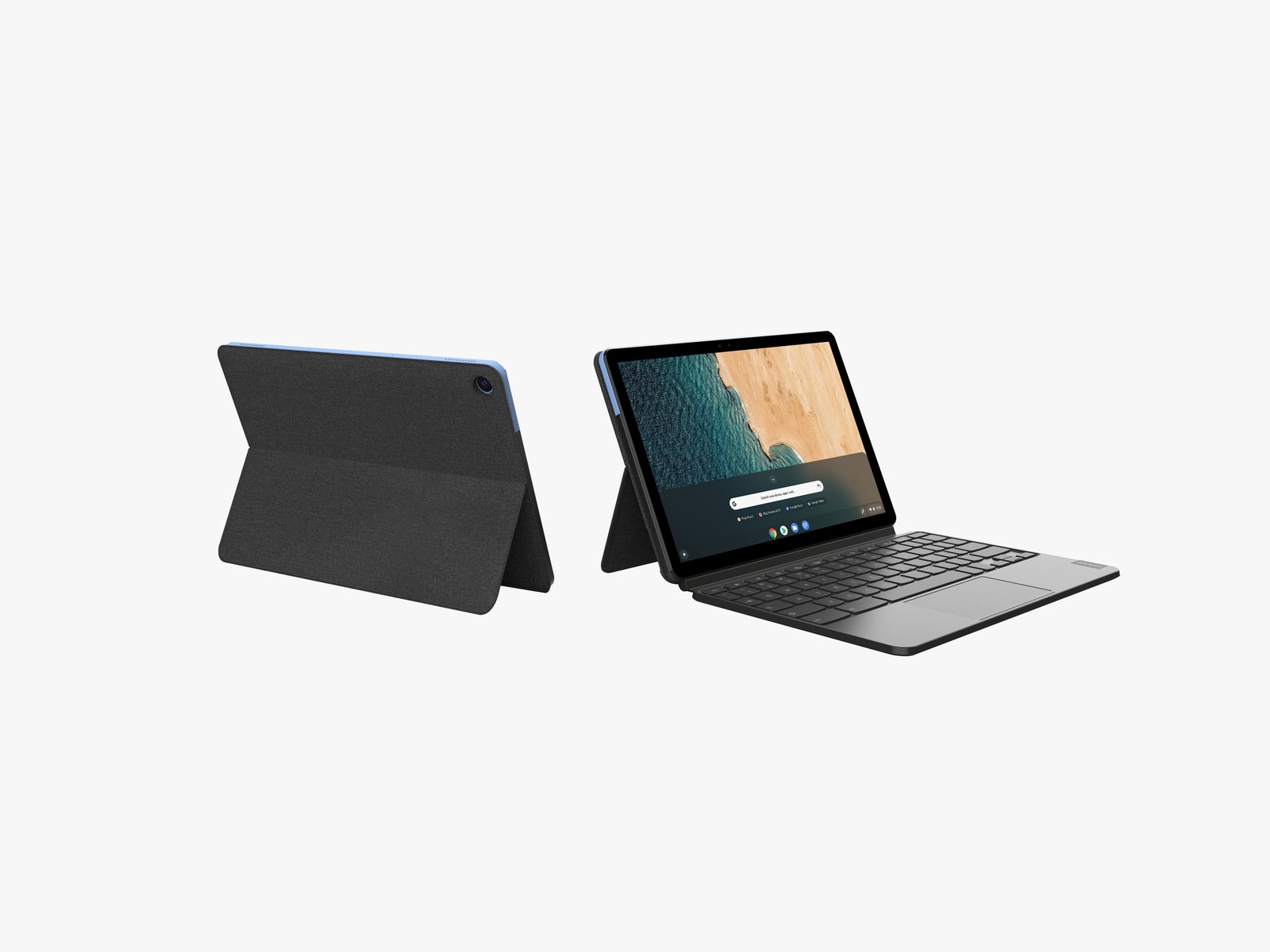 The vast majority of laptops that cross my desk are dull pieces of plastic and metal, but every now and then I get to test a machine that feels genuinely fun, innovative, and exciting. Lenovo’s Duet Chromebook is exactly that. The fact it’s relatively cheap to boot only adds to the appeal.

The Duet isn’t right for everyone. It’s a Chromebook after all, which means there are some software limitations. It’s also not terribly powerful. But for people who can live within the confines of the Chrome browser, and who want something ultra-portable with great battery life and tablet functionality, this Lenovo laptop delivers.

The Duet is slightly smaller than the entry-level iPad, though the experience of using it is much closer to the Microsoft Surface Go. It has a similar 10-inch screen with a detachable keyboard and back cover.

As a tablet, it’s comfortable to hold. It’s the perfect size for reading on the couch or in bed. But this is one area where Google’s Chrome OS isn’t ideal, as there’s no easy way to turn off automatic screen rotation, something you can do in operating systems like Android or iPadOS. That’s no fault of the Duet, but something to be aware of—Chrome OS is still rough around the edges on a tablet.

The good news is that Google has been putting some work into making Chrome OS more tablet-friendly. Early this year, an update added support for a “tablet mode,” which offers several navigational gestures similar to those in Android phones.

Swipe up from the bottom of the screen and you’ll see the dock with your favorite apps. Use the same gesture, but swipe up further and faster and you’ll get to the home screen. Use the same gesture yet again, but pause at the end of the swipe and you’ll see the recent apps screen. When you’re browsing in Chrome you can swipe in from the left side of the screen to go back to the previous page (though this did not always work for me).

The Duet automatically enters the new tablet mode when you detach the keyboard, and it makes a great way to browse the web. The 1920 x 1200 screen has a 16:10 aspect ratio, which gets a sizable amount of text on the screen at once. And the 400-nit brightness is good enough to read in bright sunlight, though the glossy screen does have a good bit of glare. Still, I was able to work outside and use the Duet without straining my eyes.

It’s worth noting that the experience of using Android apps on Chrome OS still isn’t great, whether in tablet mode or not. Slack, in particular, was terrible. It constantly failed to refresh, causing the Duet to lock up repeatedly, and refused to send messages. The Android Zoom app wasn’t great either, though Zoom worked just fine in the browser. It’s why I mostly stuck to using Chrome.

As much as I enjoyed browsing the web in tablet mode, I am a writer, and it wasn’t until I attached the keyboard that I really started to like the Duet. It remains an incredibly slim and lightweight package, and that makes it easy to toss in a bag whenever I’m heading anywhere—even the backyard.

The keyboard snaps solidly in place thanks to a magnet and pin system, though the “hinge,” a thin piece of material that attaches the keyboard to the connector, feels a little thin. Fortunately, the back cover (which is also a separate piece that attaches magnetically) has a nice folding kickstand that keeps the whole package steady on any flat, desk-like surface. The floppy hinge is really only an issue when you put the Duet in your lap.

The keyboard is great considering the Duet’s size. To keep it close to full-size keys, Lenovo trimmed down things typically found on the right side, like the number pad. This is mostly fine, though I did have some trouble consistently nailing the apostrophe key. It might take some time to adjust if you’re coming from a traditional full-size keyboard. Thankfully, the built-in trackpad works well—it never activated while I typed.

What’s a bit of a headscratcher is the port situation on this convertible. There’s only one USB-C port—you use this for charging or if you want to connect the Chromebook to an external display—but otherwise, you’ll have to rely on USB-C hubs to connect anything else. There’s also no headphone jack, something you’ll find on the Surface Go and iPad. It’s bizarre, and it means you’ll have to rely on an adapter or Bluetooth earbuds.

Enough Power for Most

It can be tough to do some work with the Duet’s tiny 10-inch screen, but thankfully the laptop doesn’t have too much trouble running most of the apps I use, and it lasts a little more than a full workday on a single charge. That’s all thanks to the efficient processor inside, the MediaTek Helio P60T (and 4 gigabytes of RAM).

It’s plenty fast enough for getting work done in the browser, sending emails, and other communications—even light photo editing (in Gimp, running via the Linux support) and document editing. I only started to see some slowdowns after having 15 to 20 Chrome tabs open with half a dozen Android apps running simultaneously alongside some Linux for Chrome OS apps.

If you plan on buying this Chromebook, and you should if you’re looking for something south of $500, it’s worth spending a bit more for the 128-GB version instead of the base 64-GB, as the Duet does not have a Micro SD card slot, meaning you can’t add any extra storage.

Beyond that though, there’s something intangibly great about the Duet—it’s fun in a way that makes me want to pull it out and use it. And for $300, that’s remarkable.