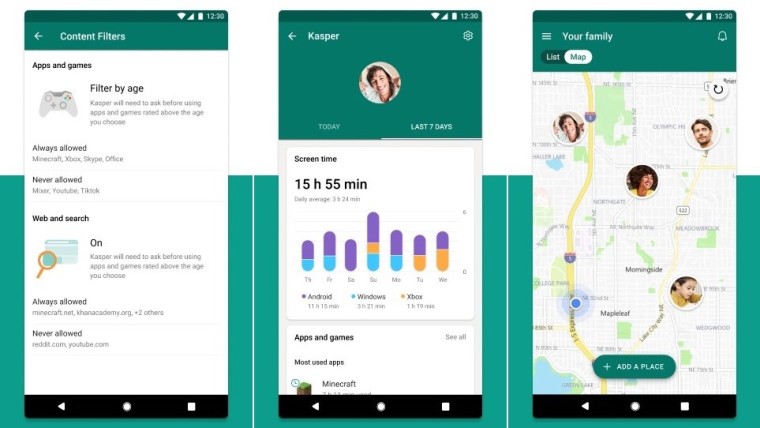 Microsoft is launching a dedicated new app, Family Safety, designed for managing kids’ screentime and app usage. The app is available now in preview form on both Android and iOS, the company announced in a blog post on Monday. To access it, you have to fill out a form here and specify how many family members you intend to have on the same preview account. The app was first announced at the end of March as an extension of the company’s existing family group features for Windows and Xbox.

Microsoft’s take on the digital safety trend has plenty of familiar features. Parents can use it to get reports on screentime and app usage, set time limits and content controls, and turn on location sharing. The app has a pretty sleek design, with a dark green color scheme along with detailed and color-coded breakdowns in activity monitoring graphs and other infographic sections.

One big benefit is that Family Safety syncs with Windows and Xbox devices. “Now when you say only one hour of a certain game, that really means one hour of that game — whether that’s being played on a Windows PC, Xbox, or Android phone,” explains Aimee Sudeck, a product manager for Microsoft 365, in the announcement post. “And if they run out of screen time, they can ask for more. You have the choice to add more time or not based on what is right for your family.”

Microsoft hasn’t said when the app will be widely available in the App Store or Google Play Store, but Sudeck says participants in the preview will “gain early access to the app and get to help shape the product by sharing feedback about your experience,” and that the company is “looking for families with children of all ages to join the preview” and “actively provide feedback.”