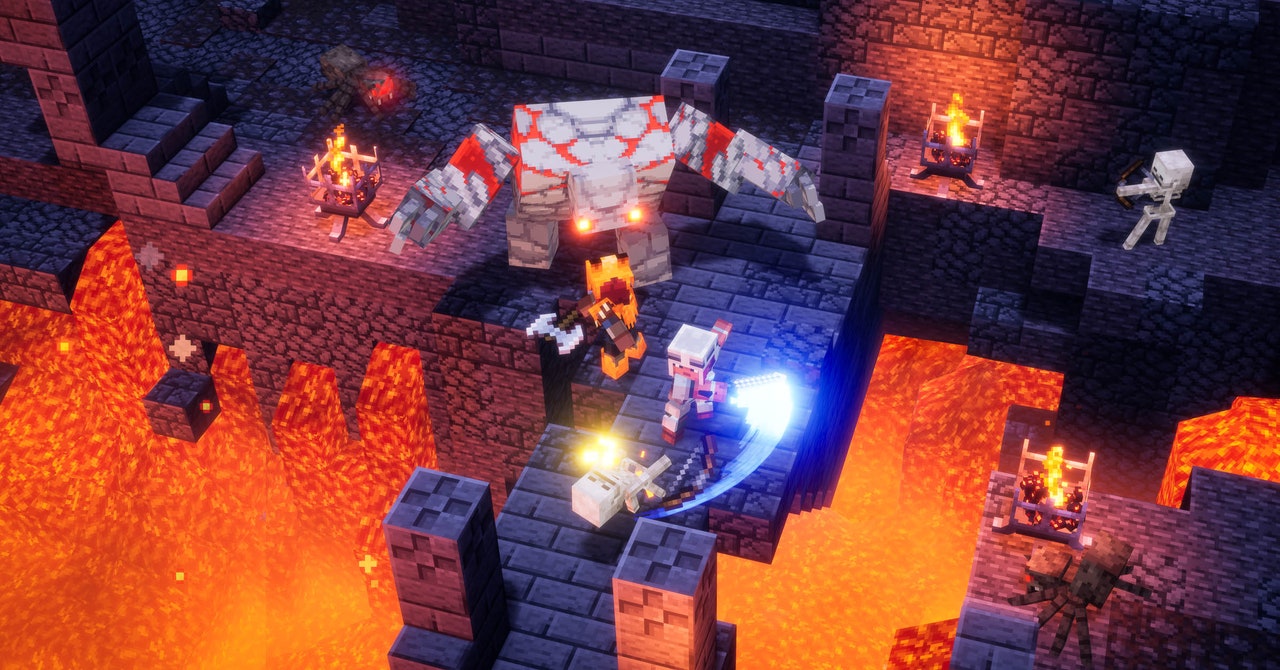 In the 1990s, before hitting at infinitely repeatable success with the action-adventure formula of the Lego Star Wars games, Lego used to put out a lot of videogames. Under the Lego Interactive banner, the company released a diverse slate of PC and console titles, in a variety of genres. Cart racers, building simulators, first-person exploration games. If you were a kid with a PC in the late ’90s, your first introduction to real-time strategy might not have been Starcraft but Lego Rock Raiders. These games were all aimed at kids, and at their best they made hardcore gaming more legible to kids by—and this is a terrible phrase, apologies in advance—leveraging the Lego brand. Lego aesthetics met fun, straightforward takes on interesting corners of the videogame universe. A lovely, successful formula.

Minecraft Dungeons, the first Minecraft spinoff developed directly by Mojang Studios, the studio that helms the core game, feels distinctly of a piece with those old Lego titles. Out on PC and consoles, it is, essentially, a Diablo game in Minecraft clothing. Like the Diablo games, it is a swift hack-and-slash game played from an overhead perspective. As an anonymous blocky adventurer, you fight monsters, gather loot, trade in that loot for better loot, and fight more monsters. You can do this alone, or with friends, either via the internet or local multiplayer. Ideally, you play for a long time, replaying randomly-generated mission maps on escalating difficulty levels, until your hunger for addictive fantasy combat is sated or you’re so kitted out with good loot that no more challenge remains. Dungeon crawlers like this are pieces of gristle you constantly chew on, gnawing them into formlessness and then coming back months or years later when the craving hits again.

As a dungeon crawler, Minecraft Dungeons is eminently competent. It’s got the bright colors and vague spookiness of the standard pastoral Minecraft setting with zombies, giant spiders, and occasional yawning pits into a mysterious hell world breaking up the farmlands and forests. The combat is spry and straightforward, a mess of quick sword slashes, spells, and arrows. It feels fine. It’s not too hard, not too simple, easy to jump into and out of for quick sessions. Fans of the genre will complain about it being too straightforward and, perhaps, a little shallow, but fans of the genre are not the point. This is, from top to bottom, a game for children. There’s nothing wrong with that.

In fact, it might be an inspired choice. Like the Lego games before it, Minecraft Dungeons makes the dungeon crawler genre engaging in a way that could easily enthrall the young fan who loves Minecraft but doesn’t know Diablo from the Pope. The power of this game isn’t in the sheer excellence of its mechanics but in its approachability. It’s a friendly sort of game, one that opens itself up invitingly to fans of Minecraft in a way that a lot of spin-offs fail to properly capture.

In being so inviting, Minecraft Dungeons might suggest a possible future for Minecraft and its vast voxel worlds. The original game isn’t going anywhere any time soon; it’s about as pure a possibility space as exists in games, with the range of types of play and creation only getting larger with each passing update. It’s almost more Lego than Lego, rewarding creativity with simple building that scales pretty much infinitely, allowing solo or collaborative creation, alongside a vast host of player-made mods and enthusiast creations that are so vast and elaborate they feel both genius and quixotic. But as time goes on, Mojang and Microsoft are going to want to find things to do with that brand. They tried a narrative adventure game with Telltale, which was OK but felt too overdetermined and pandering to celebrity to really capture the spirit of Minecraft. In contrast, Minecraft Dungeons feels entirely in sync with the core game, taking its imagery and ideas—its very nebulous “brand,” if you want to go there—and stretches it to accommodate entirely new modes of play.