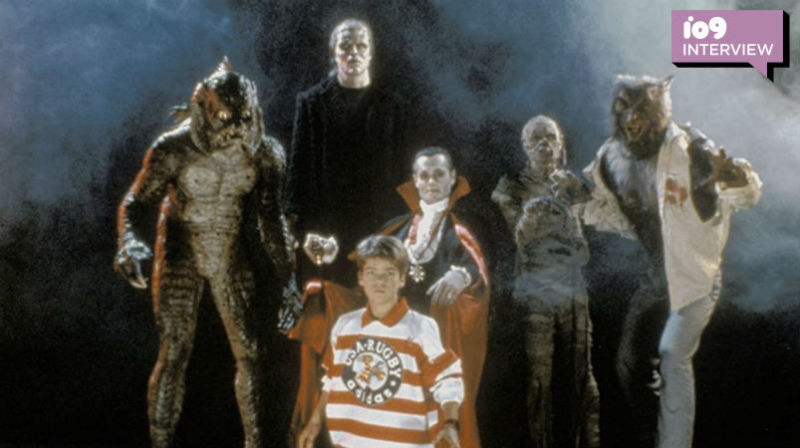 A group of friends teams up to defeat the greatest collection of villains ever assembled. No, it’s not a comic book movie, it’s The Monster Squad, Fred Dekker and Shane Black’s 1987 cult film starring Dracula, Wolfman, the Mummy, and Frankenstein’s monster.

Andre Gower played Sean, a monster-obsessed middle schooler who, along with his friends Patrick, Rudy, Horace, Eugene, and sister Phoebe, teamed up to defeat the Avengers of Universal Monsters. Upon release, the film was a box office disaster—but in the years since, it’s gained a passionate fan base, one that Gower brought together for an upcoming documentary called Wolfman’s Got Nards. It follows the making of the film, its reception, and, most importantly, its resurrection as a cult classic. The film features interviews with dozens of people involved including director Dekker, co-writer Black and, full disclosure, yours truly, as a Monster Squad superfan and art collector.

“Here’s what I always come back to,” Gower told io9 on a phone call last week. “Would I have rather been in a summer hit in 1987 that no one cares about or remembers, or would I rather still have an impact with people 30 years later and see the effect it has on them? And that’s a no brainer. Not many people get to deal with something like that.”

Being as the world feels like it’s filled with all kinds of monsters these days, we asked Gower to give us some fun stories from the set of The Monster Squad.

One of the biggest highlights of making the movie for Gower was working with the actors who played the monsters, such as Duncan Regehr as Dracula and Tom Noonan as Frankenstein’s monster. Except, there was a twist.

“We never saw [them] out of character or out of costume or makeup,” Gower said. “I had to go home and go to my local video store to go rent Manhunter so I could see what Tom Noonan looked like, because I’d [been working with] him for like a month and a half and didn’t know what the human being looked like. Once I did that I joked that I wish I hadn’t because he’s scary as shit in that movie.”

As a kid (heck, even as an adult) seeing big explosions and awesome effects in a movie is exciting. But imagine seeing those things in person.

“The experience of being on the set as an observer was amazing,” Gower said. “The creature effects and actors in the suits and explosions and things like that. Usually, kids got to see it in the movie theater, they didn’t get to see it happen [in reality].”

He also loved shooting Monster Squad all over the Los Angeles area including multiple studio lots. “We were in all these places famous movies were shot,” Gower said, mentioning Culver Studios, the Universal lot, and the Warner Bros. lot. “Westerns and lagoon movies and Gilligan’s Island, things like that. It was neat to be part of the overall fabric of Hollywood movie-making.”

One week, while shooting on the Universal lot, catering for the production was inside a saloon on the Western section of the lot. I’ll let Gower take it from there.

“You walked in and pretended you were a cowboy doing a Western, which I’ve always wanted to do. And Michael MacKay, who was the mummy, it takes so long for these guys to get in and out of their makeup and costume. Even Michael MacKay had at least an hour and a half getting into that outfit because there was a half-face prosthetic with the fake teeth coming out that are all glued. The wrapping was all hand done and that was an amazing, amazing build,” he told us. “I think everyone discounts the mummy but you need to look at it. It is amazing. Everyone looks at Creature and Wolfman but I’m like ‘Have you looked at the other one?’”

He continued, “I remember we were eating, it was Salisbury steak and Michael couldn’t see to feed himself. So we sat there and fed him steak, moving the plastic fork around his bandages and out of the way so it wouldn’t drip. We’d move his fake teeth so he could eat a little food. And then I believe Michael Faustino (who played Eugene) ended up palling around with him and would give him drinks like soda with a straw.”

When I was growing up, I thought one of the coolest things in The Monster Squad was the kids’ epic treehouse. It was massive, filled with awesome posters and toys, and I wanted one so badly. Well, according to Gower, it actually existed and was impressive even then.

“That was neat, to realize that all these craftsmen and these guild people built that treehouse in a tree out in Santa Clarita and then you come back and there’s a replica of it on a stage,” he said. “I’m like ‘Wow, that’s really cool. That’s how movies are made. This is bitchin’.’”

Over the past several years, Gower, along with co-writer Henry Darrow McComas, has been working on a documentary called Wolfman’s Got Nards, named after the film’s most iconic line. Because I’m in the doc I won’t speak to the film’s quality (ahem, it rules), but making it gave Gower one more super-powerful behind the scenes Monster Squad memory.

“The thing I’ve enjoyed is meeting an individual fan or a group of fans and them telling you why this movie means something to them, and it’s a rainbow of connections,” Gower began, quickly joking it’s not an actual rainbow connection. “At the very beginning, I thought people liked the movie because it was kind of nostalgic and culty and monstery when they first saw it. But they all really dive deep down into certain characters or themes or archetypes or situations. They all make some sort of connection to either their own personal life, their group of friends, their parent’s relationships or their siblings and it just started to flood. And when you open up your mind to absorb all that, it’s really fascinating and that’s really where the doc started to take flight.”

Wolfman’s Got Nards does not currently have distribution but Gower is optimistic fans will see it soon. For updates follow @TheSquadDoc on Twitter. The Monster Squad is available to download in all the usual places.