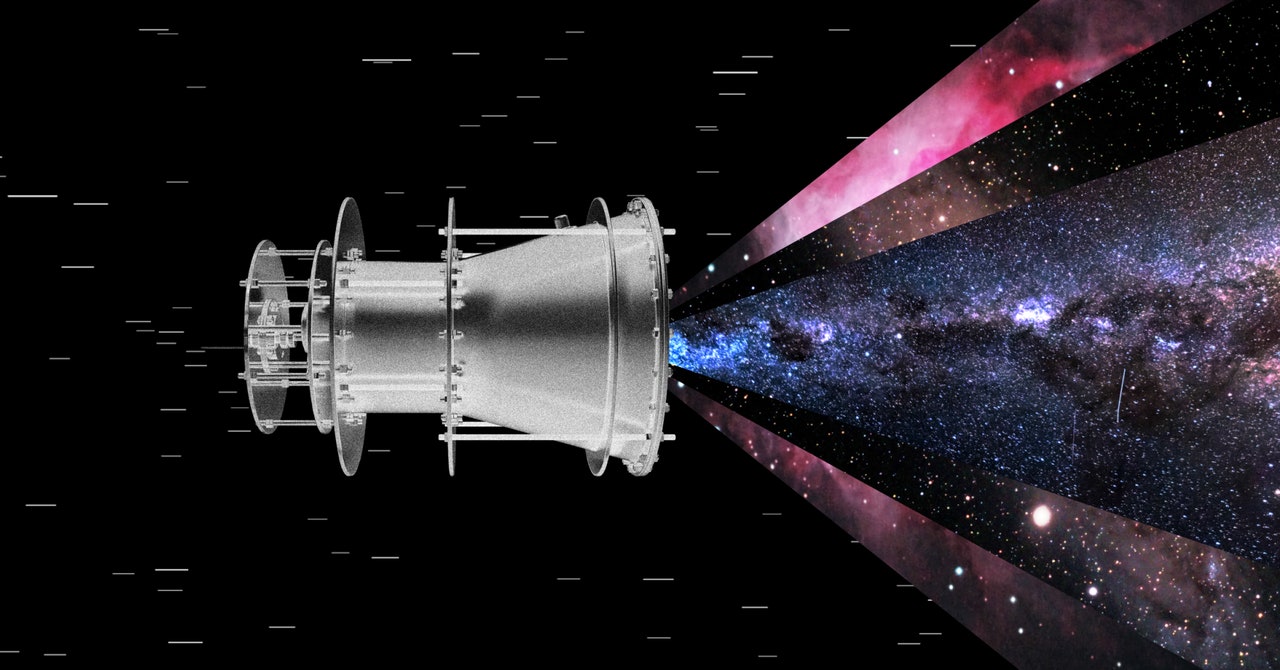 In 2016, White and his team at NASA published the first peer-reviewed experimental evidence that appeared to show the EmDrive actually producing thrust. The results of White’s experiment and the theory behind it remain controversial. No one can agree about whether the device actually produced thrust or how to explain it if it did. But the fact that NASA was even supporting this kind of far-out research was good news for anyone planning a vacation to Alpha Centauri.

At Limitless, White wants to take the research even further, but he won’t be building any engines—at least not yet. Instead, he’ll be probing the fundamental physics that he and others believe may explain how exotic propulsion systems like the EmDrive work. He calls it a dynamic vacuum model, and it cuts to the heart of what we talk about when we talk about “physical reality.”

Most physicists today view the physical world as a soup of subatomic particles like photons, quarks, and neutrinos in which the location of a particle at any given time is a matter of probability. This picture of reality is known as the Copenhagen interpretation of quantum mechanics. It may be the most popular scientific theory of reality, but it’s far from the only one. A competing view, known as pilot wave theory, says the quantum world is deterministic. In this theory, subatomic particles are “piloted” along a definite path like a train on its tracks, and the only reason their location appears nondeterministic is that we don’t understand the deeper quantum field that may ultimately constitute reality.

This quantum field is referred to as the quantum vacuum and can be thought of as the vast, undulating floor upon which the rest of reality is built. If you were to take all the matter out of the universe and bring the temperature down to absolute zero, the quantum vacuum would be what’s left. We’re accustomed to thinking of vacuums as totally empty, but the quantum vacuum is never truly empty. Electromagnetic waves and particles are popping in and out of existence all the time, and it’s these energy fluctuations that give rise to the physical world.

It’s pretty heady stuff, but if physicists can get a better understanding of the quantum vacuum—assuming it exists—they could, in principle, tap its energy to power a spacecraft. Indeed, this is a potential theoretical explanation White and his colleagues at NASA offered for how an engine like the EmDrive might be able to produce thrust. It’s hardly the only explanation—arguably the most convincing one is that the observed thrust was actually just a measurement error.

“Harold tried to come up with a theory to explain the EmDrive by calling it a quantum vacuum thruster,” says Martin Tajmar, a physicist at Dresden University of Technology who studies advanced propulsion systems. “His intuition is good, but the concepts he uses and cites are controversial. Only the experiment counts—no accepted theory has been put on the table that predicts any of this.”

It’s one thing to have a theory about why an EmDrive should work, and quite another to have experimental evidence of it in action. White and his colleagues at NASA appeared to have both, but so far no one has been able to replicate their results. Tajmar runs the SpaceDrive program at Dresden where he builds ultrasensitive devices capable of detecting almost imperceptible amounts of thrust. He uses these devices to try to replicate the results of EmDrive studies that appeared to produce thrust like the one conducted by White and his colleagues at NASA.

Tajmar hasn’t seen anything yet, but he says that doesn’t mean that probing the physics with experiments isn’t worthwhile. He compared it to high-temperature superconductivity, a physical phenomenon that may revolutionize electromagnetic technologies, but that wasn’t predicted in theory. “We need to be lucky, have a good intuition, and just try things that were never tested,” Tajmar says. “We were lucky to find high-temperature superconductivity by continuously trying, and hopefully the same thing will happen with breakthrough propulsion.”