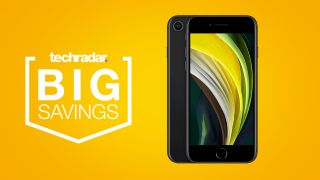 iPhone SE deals have quickly become a safe haven for those who really like Apple…but not the massive price tags that usually come with it. And if you’re looking for this new iPhone while also scoring a big data package, Three has the perfect contract.

During the launch of the iPhone SE, Three released a 100GB of data deal – perfect for those big streamers out there – and now, a few months on from its release, Three has dropped the price of this deal.

Now you only have to pay £27 a month and £29 upfront for it. That’s pretty excellent considering that your 100GB data cap will get you through a month’s worth of…well, pretty much everything you can throw at it.

You can find out more about this iPhone deal below:

iPhone SE: at Three | 24 months | £29 upfront | 100GB data | Unlimited calls and texts | £27 per month
If you know you need a lot of data on your phone then you won’t find a better iPhone SE deal than this. Three is supplying 100GB of data at a price of just £27 a month and £29 upfront. That will easily get you through a month’s worth of heavy HD streaming, gaming, social media and pretty much everything you can throw at it!View Deal

Ah, Apple finally did it – a cheap iPhone. It’s been years since Apple offered us a budget handset, but the SE 2020 is clearly that. It comes at almost half the price of the iPhone 11 while offering some solid 2020 specs.

4K video, Apple’s A13 Bionic processor, wireless charging, increased battery size and an IP67 rating are among the more impressive features of this device. To lower the price, however, Apple has gone back to the design of the iPhone 8, brought the number camera lenses down to just one and dropped the screen quality.

Overall, this falls in place as the best budget device Apple has right now, coming way under its more recent devices in price, while still offering some impressive specs to outdo the iPhone 8, 7 and other such devices.

See what other iPhone SE deals are available