OnePlus 8 vs OnePlus 7T comparison: Worth saving up? 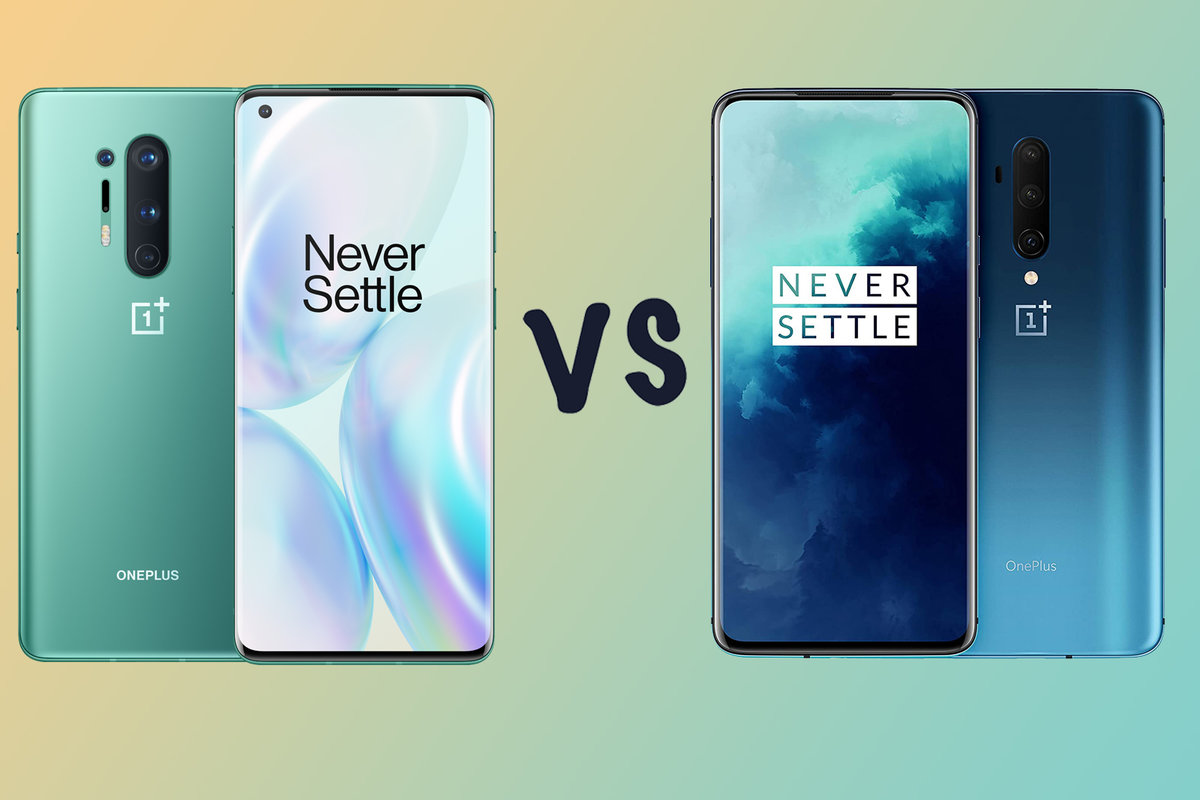 Like every season, the latest OnePlus 8 series made a lot of noise when they launched, but were soon compared with their respective predecessors to questions their value offering. With the OnePlus 7T being hailed as one of the best affordable flagships of last year, the OnePlus 8 had big shoes to fill. With most of the specs being so similar between the two, many questioned the higher asking price of the new flagship.

To help you with that comparison, we compared the OnePlus 8 and the OnePlus 7T over the fast few weeks to try and understand how much these differences actually affect the user experience. It also shows how much OnePlus’s products have matured over the course of the year.

Check out the OnePlus 8 on Amazon

Check out the OnePlus 7T on Amazon

The new OnePlus 8 brings a familiar yet refined design that not only makes the phone a lot more light and compact, but also svelte. The curves on the back meet the display seamlessly and feel very premium. It is astonishingly light and easy to use for a phone with a display this big.

The OnePlus 7T has a much simpler ensign approach with a huge flat display on the front and curves on the back. Its camera module is one of the most iconic on any recent smartphone, but the rest of the phone is uninspiring.

On paper, both the phones have a very similar display, but the sole distinction of a curved panel on the 8 makes a world of difference in terms of handling and its premium proposition. It has a slightly smaller hole-punch notch, instead of the waterdrop kind on the 7T, and gets just a little brighter. Both of them have a refresh rate of 90Hz.

The OnePlus 7T has the louder speakers of the two, with its primary bottom-firing speaker still being one of the loudest ones we’ve seen on a smartphone. The OnePlus 8 has a lot more balanced sound output, but at lower levels.

The design choices on the OnePlus 8 is one of the biggest differentiating factors between the two devices. While the 7T is no slouch, the 8 is definitely the more refined and polished phone that looks classy and expensive. Moreover, its Interstellar Glow finish is to die for, and is exclusive to the 8.

Both the devices are powered with the latest Qualcomm chipsets available during their time, with the Snapdragon 855 Plus powering the OnePlus 7T and the Snapdragon 865 powering the OnePlus 8. In terms of raw performance, you’ll be hard-pressed to spot a disparity between them. It’s only in extremely heavy games at high refresh rates that differences will be noticeable. We will call this round a tie; both of them will suffice the most demanding of users.

The 8 is also 5G-capable, but that shouldn’t be a deciding factor for consumers in India.

Things get a lot more interesting with the cameras. The primary 48MP shooter, as well as the secondary 16MP ultra-wide shooter, are the exact same between the two phones. Sadly, the OnePlus 8 misses out on the 12MP telephoto lens, and instead opts for a paltry 2MP macro lens. This means, you lose details once you start zooming in. It isn’t always evident at 2x, but gets noticeable later.

Not just that, the ultra-wide camera on the 7T can double as a macro lens when needed, and actually provides better results than the dedicated camera on the OnePlus 8, with easier focus, higher resolution and better colours.

So technically, the older OnePlus 7T is better in one aspect, and the same in others, giving it the win in this round.

We’re looking at a 4,300mAh battery in the OnePlus 8 and a 3,800mAh battery on the OnePlus 7T. As expected, the 8 lasts a fair bit longer, and should last you a day with ease. Our 7T struggles to reach that figure now, and usually calls for charging by the end of the day.

Charging is similar between the two as well. The 30W Warp Charger can take the phone from 0 to full in about 70 minutes, with most of the refill taking place in the initial half-hour. We would have liked OnePlus to bring faster charging on the 8, as most of its competition has caught up.

With the price delta of almost Rs 10,000 between the two devices, most consumers looking for value are better suited with the OnePlus 7T. The OnePlus 8 is a significantly more mature execution in terms of the design, and that must be high on your priorities to consider it. The 8 is also likely to get one more Android version update, but that will be a factor only about three years down the line.

GPT-3 is the world’s most powerful bigotry generator. What should we do about it?

GPT-3 is the world’s most powerful bigotry generator. What should we do about it?