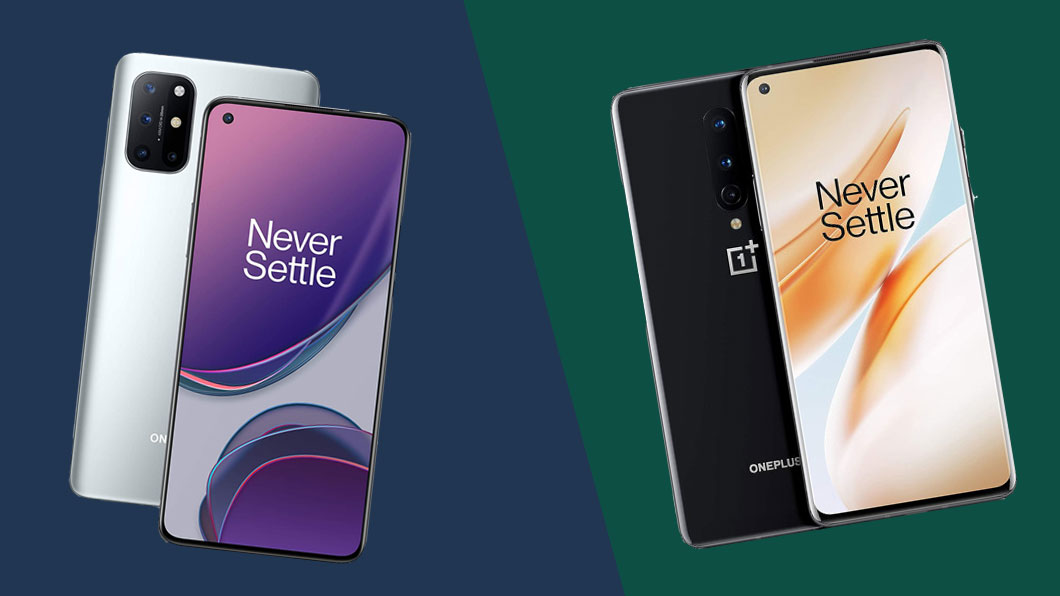 The OnePlus 8T could almost be considered the OnePlus 9, because there are a huge number of upgrades and changes from the OnePlus 8.

They include a higher refresh rate, more cameras, a bigger battery, and faster charging, among other things. However, some details have also remained the same, so the 8T isn’t an upgrade in every way.

Below we’ve looked closely at all the key aspects of the new phone and compared them to its predecessor, so you can see exactly how its design and specs differ, and where they’re the same.

From the back though the differences are more apparent, as while the OnePlus 8 has its camera block near the center, for the OnePlus 8T it’s in the top left corner, and more of a square shape.

Both phones then have a glass back with a OnePlus logo in the middle, but the colors differ.

With the OnePlus 8T you get a choice of Aquamarine Green or Lunar Silver shades, while the OnePlus 8 comes in Onyx Black, Glacial Green, Interstellar Glow, or Polar Silver – although not all colors are available everywhere.

At first glance these two phones have very similar screens, as they both have a 6.55-inch 1080 x 2400 AMOLED display with 402 pixels per inch. However, while the OnePlus 8 has a 90Hz refresh rate, the OnePlus 8T ups that to 120Hz. This should make visuals feel smoother, particularly when they’re in motion.

This isn’t a totally new feature for the company as the OnePlus 8 Pro also has a 120Hz refresh rate, but the standard OnePlus 8 doesn’t.

You’ll probably have noticed that the OnePlus 8T has a bigger camera block than the OnePlus 8, and that’s because it’s got to fit an extra lens in.

So the main changes on the OnePlus 8T are the addition of a monochrome camera, upping the megapixel count of the macro one, and tweaking the aperture of the 48MP camera. There’s also a wider field of view on the OnePlus 8T’s ultra-wide lens, at 123 degrees, up from 116 degrees on the OnePlus 8, so you can fit more in your shots.

OnePlus also promises improved low-light photos and video stabilization, but we’ll have to put the OnePlus 8T through a full review to see whether it lives up to the claims.

This all joins new camera features such as a Video Portrait mode, which allows you to shoot videos with a natural bokeh effect, similar to portrait mode photos.

Both phones top out at 4K 60fps video recording though, and both have a single-lens 16MP snapper on the front.

The OnePlus 8T has a 4,500mAh battery, making it slightly bigger than the OnePlus 8’s, which comes in at 4,300mAh. It remains to be seen whether it will also last longer, but in our review we found that the OnePlus 8 lasts over a day, which is pretty good.

The major battery change though is the charging speed, as the OnePlus 8T supports super-fast 65W charging, while the OnePlus 8 tops out at a still-respectable 30W. The company claims that the 8T can charge to full in just 39 minutes, while in our tests we found the OnePlus 8 could fully charge in around an hour.

Note that neither of these phones supports wireless charging – for that you’ll need the OnePlus 8 Pro.

Both the OnePlus 8 and OnePlus 8T are powered by a Snapdragon 865 chipset, and both come with a choice of either 8GB or 12GB of RAM, so performance should be very similar. Both phones also support 5G and come with 128GB or 256GB of storage, though the 8T uses UFS 3.1 storage, which is slightly faster than the UFS 3.0 in the OnePlus 8.

In both cases you’re getting the company’s OxygenOS take on Android, which adds additional features. With the 8T it’s OxygenOS 11, which OnePlus claims is faster and smoother than the OxygenOS 10 found on the OnePlus 8, but as with Android we’d expect an update to the latest OxygenOS version for that device.

The latter phone has a higher refresh rate, an extra camera lens, a bigger battery, faster charging, newer software, and general tweaks, changes and improvements throughout. The core power of the phone though remains unchanged, so if you’re looking for a performance boost you won’t likely find much of one with the OnePlus 8T.

As usual with the move to a T model it’s probably not worth upgrading if you already have the OnePlus 8, but if you’re choosing between the two then there’s enough that’s new, different and likely better on the OnePlus 8T that it’s probably the better buy.

That said, you might want read our full review to see if the changes on paper are as significant in practice.