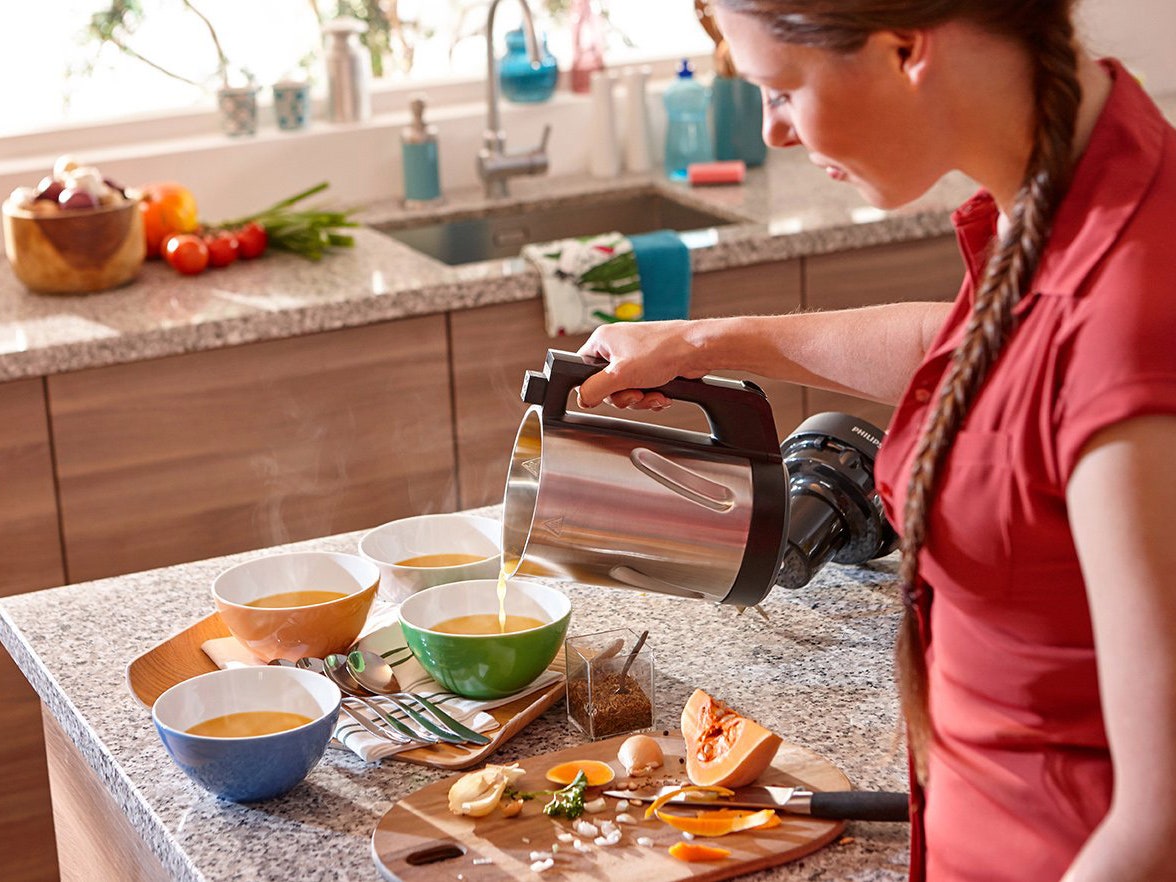 In the spring of last year, while strolling the miles of aisles at my favorite kitchen trade show (remember trade shows?), I came across an appliance that looked like the child of an electric kettle and an old-school frappe machine. This was the Philips Soup Maker, and there was a practicality to it that struck a chord with me, the kind of tool I could imagine the vaguely kitchen-averse putting to good use. Do minimal prep, press a button and—boom!—soup appears in less time than it takes to watch an episode of Bojack Horseman.

The Soup Maker is a clever thing. The bottom does the heating, and the removable top has a motor that powers a spinning blade on a stick. With buttons on the top, you scroll through five programs for puréed soup, chunky soup, creamy soup, compote, and cold blended soup, each one with its own heating and blending settings. Purées of course require lots of blending, but fish stews and chicken soups need just a bit of stirring. The device is solid feeling and practical looking, with a gray, metal jug and a nice, large handle for pouring.

My wife took one glance at it and remarked that it looked like something you could carry nuclear rods around in.

Yet the moment I started testing it, confusion found me: I couldn’t figure out where to set down the top when it wasn’t attached to the rest of the Soup Maker. You have to set it on its side, blades either on the countertop or in the air. Even when it’s clean, it’s awkward, let alone when there’s hot soup all over it. I’d eventually use a plate, a quarter sheet pan, or a loaf pan to keep the top from making a mess on the counter while I dealt with the contents of the jug.

But making soup? That was easy. Rough chop some veggies and maybe a little meat, crack a can of broth, pour it all into the jug with some herbs, choose one of the five presets, walk away, and return to hot lunch 20 minutes later.

I plowed through soup after soup, chili after smoothie after vichyssoise. I made some pretty glorious tomato soup. I made strawberry-pear compote, which I put on toast and granola. I used the cold setting—essentially three minutes of blending—to make decent smoothies with a bunch of frozen fruit. Blender aficionados would scoff (nobody’s going to buy this thing just for its smoothie abilities), but it’s a nice little perk.

Using the cold setting again and taking another hit of good tomatoes, I made gazpacho. The preset programs make it so you do as little cooking as possible. There’s no hovering over a pot, no stirring. Just go do your thing while it cooks. It’s quite effective if you want a nice, home-cooked meal to appear with a minimum of effort. Philips’ recipes tend to be a bit vague about salt, but the recipes are otherwise solid. The coconut curry shrimp soup, made with pumpkin puree and raw shrimp, had a bracing, fresh salinity that was surprisingly good.

There isn’t a whiff of trendiness around this machine, but it’s an interesting and efficient way to make food, especially when you get the hang of it. It is a pleasing, old-school blend of analog and automation. You realize that having some chopped onions in a Tupperware tub and some canned or boxed broth on hand gets you halfway there with many of the recipes. You can blast through the prep in a few minutes and go for a walk while it cooks and stirs. Or you compare the recipes in Philips’ 40-recipe mini cookbook with a favorite from of your own cookbooks with similar recipes and start riffing, if that’s your thing.

This is a good spot to consider what this thing is and who it’s made for, and those are hard concepts to peg. The Soup Maker is a very purpose-built little machine. It’s quiet and discreet enough that you could even use it to make soup in an office or in a dorm room without really bugging anyone as it chugs away, little tendrils of soup steam rising from under the lid. Basic soup in a pot is pretty easy to make, and the Soup Maker makes it even easier. If you’re into cooking, you’ll like it fine. If you’re not into cooking, you might like it a lot.

Along with the peculiar inability to set the top down without making a mess, there are two significant drawbacks. First is flexibility. The minimum and maximum fill lines are only about a pinkie’s width apart on the interior of the jug, meaning you can cook between about 4-1/4 and 5 cups of soup. This peculiarly tiny difference has a purpose: It allows all of the food to cook properly when you follow Philips’ recipes and quantities, but you’ve always gotta cook that amount, which might be called “plenty of dinner for two if you’ve got toast.” Those buying with their eyes would be forgiven if they thought it could make much more than that, as those min/max lines are less than halfway up the side of the jug.

More troublesome for Philips is that there are other, similar products that are more versatile. In the glass jar of the Instant Pot Ace, a blender that cooks, you can watch everything boil and blend away. Plus it’s a blender, which means you can set the lid on the counter without making a mess. More importantly, dudes, you can use it to make frozen margs!

Things get a little thornier when you start talking price. The Soup Maker originally retailed for $150, but the price has recently dropped to $130 just about everywhere. Even at that lower price, the Instant Pot Ace, which retails for $100, is still the cheaper device. Likewise, there’s an army of much-more-versatile pressure cookers waiting to serve your needs at or below the $100 mark. Watch for a sale, and you could also get a good saucepan and quality immersion blender for about that much, at which point you could make soup by the gallon, or just enough for lunch. It’s weird enough math that I wouldn’t be surprised to see the Soup Maker’s price come down even further in the coming year.

Despite all of that, I liked the little thing. Put your ingredients in the jug, press a button, let it chug away, and presto! Hot soup! Get ambitious on a Sunday and you could make turkey chili and prep some corn chowder while it cooked. In about an hour, you’d have lunch for the week.

If that’s your kind of cooking and you like soup, buy the Soup Maker with confidence and don’t look back. Dinner will be ready soon.