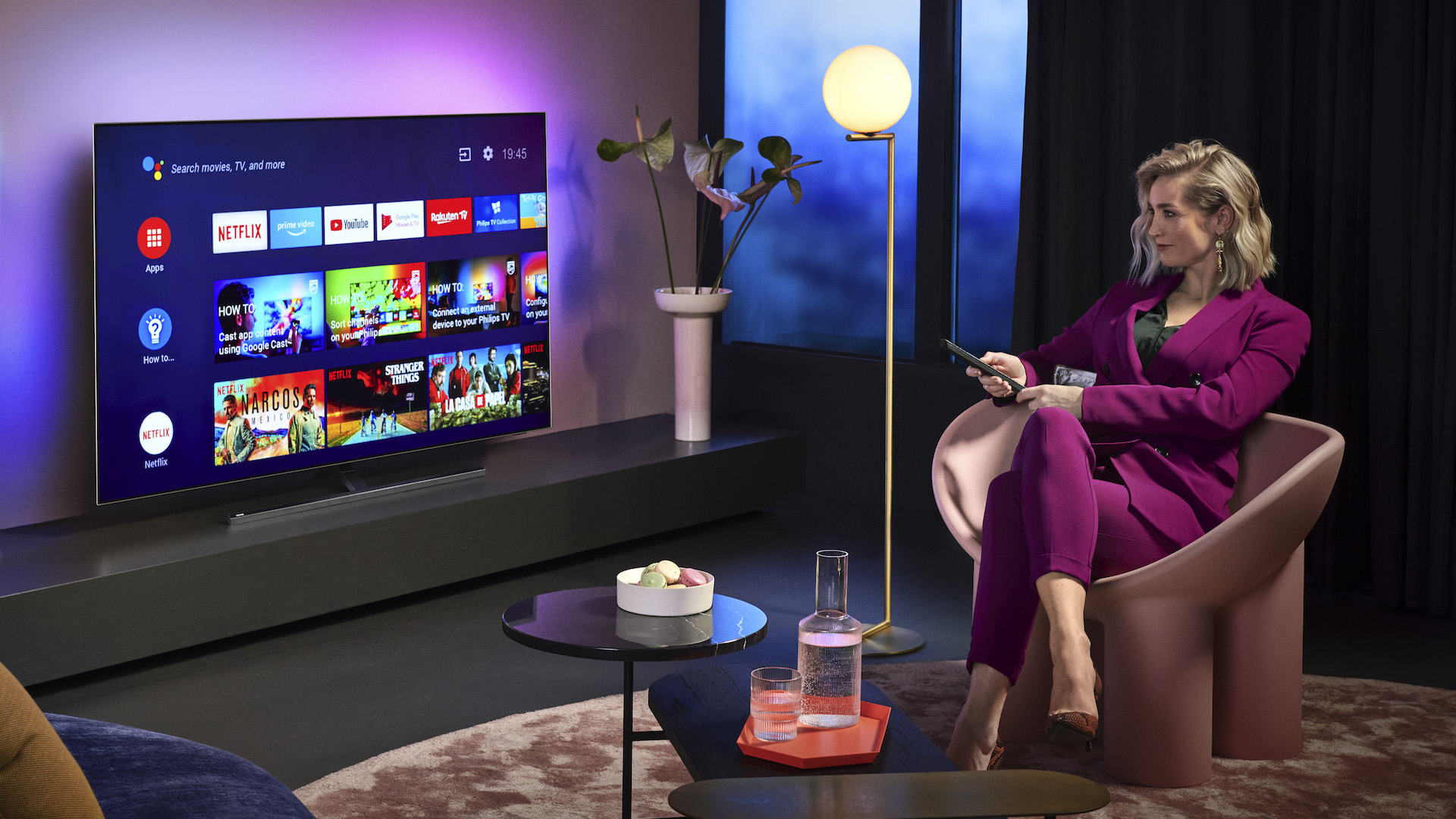 What’s new with Philips TVs in 2020? There are a number of new Philips TVs coming this year, from OLED beauties to more pedestrian (but still likely impressive) LCD sets.

Philips is a company with great options, whether you’re buying on a budget or for the fanciest centerpiece television you can afford, and the sets announced so far look set to continue that tradition.

There’s a host of new OLED TVs coming from Philips this year, set to release in July – with OLED 805, 855, and 865 models replacing last year’s OLED 804 and 854 sets. All three new models will feature three-sided Ambilight, a fourth-gen P5 processor and new AI functionality to enhance the picture further.

With the Philips OLED 804 now coming stateside, it looks like some big things are in the pipeline too. Given Funai currently licenses the Philips brand over in the US, it’s a welcome move that should bring some stiff competition to the nation’s TV market.

You can find every new Philips TV announced for 2020 below, with a rundown of the specs, processing and format support to expect from this year’s TV range. Make sure to check back every few weeks, though, as we’ll be adding new televisions as they’re formally unveiled.

Philips OLED 805 / 855 865 (available in 55, 65 inches): This set of OLED TVs may differ in design – only the TV stand, really – but they should all offer the same level of high-end excellence. Philips’ OLED sets are largely spectacular, thanks in no small part to the three-sided Ambilight projection built in their frames – and this year’s cohort promises greater AI processing too.

These aren’t quite the flagship sets in the range, as the Philips 984+ (which launched in late 2019) is still the top dog for now. Expect Dolby Atmos audio and 50W speakers, though – with a release in July, after a delay from the initial May launch date.

Philips 9435 4K HDR LED (available in 55, 65 inches): Even as we drop down to LCD panels, this 4K HDR television still packs in a 50W 2.1.2 channel audio system – from Bowers & Wilkins – with upwards-firing drivers to make the most of Dolby Atmos content. Same Ambilight features as above. (Pricing / availability not announced.)

Philips 9235 4K HDR LED (available in 43 inches): 40W 2.1 channel speakers should still give this smaller 4K set something to shout about – while three-sided Ambilight should help too. (Pricing / availability not announced.)

Philips 8505 4K HDR LED (available in 43, 50, 58, 65, 70 inches): This Philips set is at the tail end of the premium range, or the top end of the mid-range, depending on your perspective. You’ll get the same three-sided Ambilight and P5 picture processor as the sets above, with a smaller 20W audio output from built-in speakers (no soundbar here.) The stand design varies between panel sizes, but you should get the same picture quality from the 43-inch to 70-inch model.

What marks out Philips TVs from the rest? The most eye-catching feature would certainly be Philips Ambilight: a projection technology that throws onscreen colors onto the wall behind your television, upping the ambience (hence the name) and making for a light-show you won’t get with Sony or Samsung TVs.

It has a good reputation for sound, too – though not through Philips own audio arm. The company collaborates with audio specialists Bowers & Wilkins for its high-end televisions, fitting them with dedicated Dolby Atmos soundbars to really hear those movie soundtracks or cheering crowds at their best.

The new-for-2020 OLED 805 / 855 / 865 TVs will also come with DTS Play-Fi to connect the TV to other compatible speakers and hi-fi units. A press release states that “Philips TV is also the first premium TV brand to include the DTS Play-Fi feature with its multi-room audio capability within the set – allowing compatible speakers to connect to the television and serve as surround speaker, or as a multi-room extension of the TV audio.”

Like most other TV brands today, Philips offers a range of LCD and OLED sets, with the latter panels saved for its more premium offerings.

Only quite premium sets have been announced so far, with every set listed above featuring the P5 Perfect Picture Processor, now in its fourth iteration. Last year’s chip was certainly impressive, but it looks like there’ll be an even bigger jump this year with the addition of AI processing / neural networks able to analyze millions of video clips and learn how to best display the content sent its way, fine-tuning the “source, color, contrast, motion and sharpness” for each frame.

A press release for Philips claims that, “By analyzing all elements of the content, frame by frame, the 4th Gen P5 reproduces a much more realistic, natural image that no longer feels like TV but creates images that closely mirror real life.”

Like Panasonic, Philips is agnostic towards HDR formats, and makes sure to support both the dynamic Dolby Vision and HDR10+ standards (unlike Samsung, which sticks only with the latter). You’ll also get the HLG (hybrid log gamma) broadcasting format, though these formats drop off when you get down to more affordable mid- or low-end sets.

Philips uses the Android smart TV platform across its TV range, with 2020 models getting the latest Android Pie (9.0) version. It’s the most common TV platform and the most unremarkable – though Android’s stability issues have generally improved over the past couple of years, thanks to updates from Google.

Perhaps most importantly though – depending on your priorities – we now know that every new Philips set this year will come with Disney Plus at launch, meaning you won’t have to wait around for a firmware update later in the year to bring the app to your television.

Of course, there are still plenty of Philips TVs released in 2019 you can still find on the market:

Philips OLED+984 Ambilight TV (available in 65 inches): The top-of-the-range TV for Philips in 2019, we loved the OLED+984 Ambilight TV when we reviewed it earlier this year. It’s the ultimate high-end lifestyle 4K OLED. It does exactly what a flagship TV should, setting a high bar for image quality, audio and design, without significant compromises. It comes in just one size: 65-inches and costs £4,499 (around $5,908 / AU$8633).

Philips OLED 854 and OLED 804 (available in 55 and 65 inches): We’re looking forward to spending more time with these screens. Identical apart from stand differences (the 854 centrally mounted, the other with a pair of legs) these 4K screens will be available in 55 and 65-inch sizes.

They’re very similar to last year’s Philips OLED+ 903, except with one key omission – they lack the impressive Bowers and Wilkins sound system, opting for a Philips-own build instead.

Running Android TV, working with Alexa and Google Assistant and with all four of their HDMI ports HDR-ready, these Ambilight screens will be ones to watch for those looking top-notch OLED visuals.

For a deeper look at these screens, read our hands-on: Philips OLED 804 / OLED 854 review.

Though OLED TVs have become Philips’ showstoppers, the majority of its range still consists of LCD TVs. Though LCD can lack the richness of a well-tuned OLED TV, they shouldn’t be sniffed at in their own right – Philips has done some stellar work not only in the picture stakes, but also with audio, thanks to a partnership with Bowers and Wilkins.

Philips 8804/PUS 8804 (available in 50, 55 and 65 inches): One of the most promising LCD screens we’ve seen in a while. It’s 4K visuals are available in 50, 55 and 65-inch sizes, and will have the full house of HDR10+, HLG and Dolby Vision support, as well as Dolby Atmos sound. It’s also the only screen revealed so far this year from Philips to include that show-stopping Bowers and Wilkins sound system again.

Philips 9104/PUS9100 (available in 55-inches): If style is more important than sound quality, check out this TV. It’s another 4K LCD panel, but has been designed in conjunction with design house Georg Jensen, and has striking chrome finish aluminum feet. It too has standard HDR support covered but drops HDR10+ and Dolby Vision, only features Dolby Atmos audio passthrough, and will only come in a single 55-inch screen size. It has a three sided Ambilight though, so this may be one to check out for its aesthetic value.

Philips 7304 Performance Series/PUS7304 (available in 43, to, 55, 58, 65 and 70-inches): This is the TV Philips is pushing most heavily for this half of the year, which is nicknamed ‘The One’. Why? Because it’s ‘the one’ TV they think will suit most people, ticking lots spec boxes will aiming to come in at a mid-range price point.

The Ambilight 4K LCD screen will come in a range of size – 43, 55, 58, 65 and 70-inches – has the full suite of HDR options and features Dolby Atmos. For more information, check out our Philips The One first look impressions.

From here down the range of LCD Philips TVs, you lose access to the top-notch P5 image processing engine, instead being left with the Pixel Precise Ultra HD processing engine. They also run the SAPHI operating system, rather than the more versatile Android TV.

Philips 4304: has no smart features, no HDR, and only two HDMI port ports. This is very much one for the kitchen, or a “my first TV” for the kids’ bedrooms.

Everything you need to know about the best TVs of 2020:

Best TV 2020: the 8 best flatscreen televisions from the past year

Best Smart TV 2020: every smart TV platform and which set does it best

Panasonic TV 2020: all the OLED and LCD televisions on their way this year