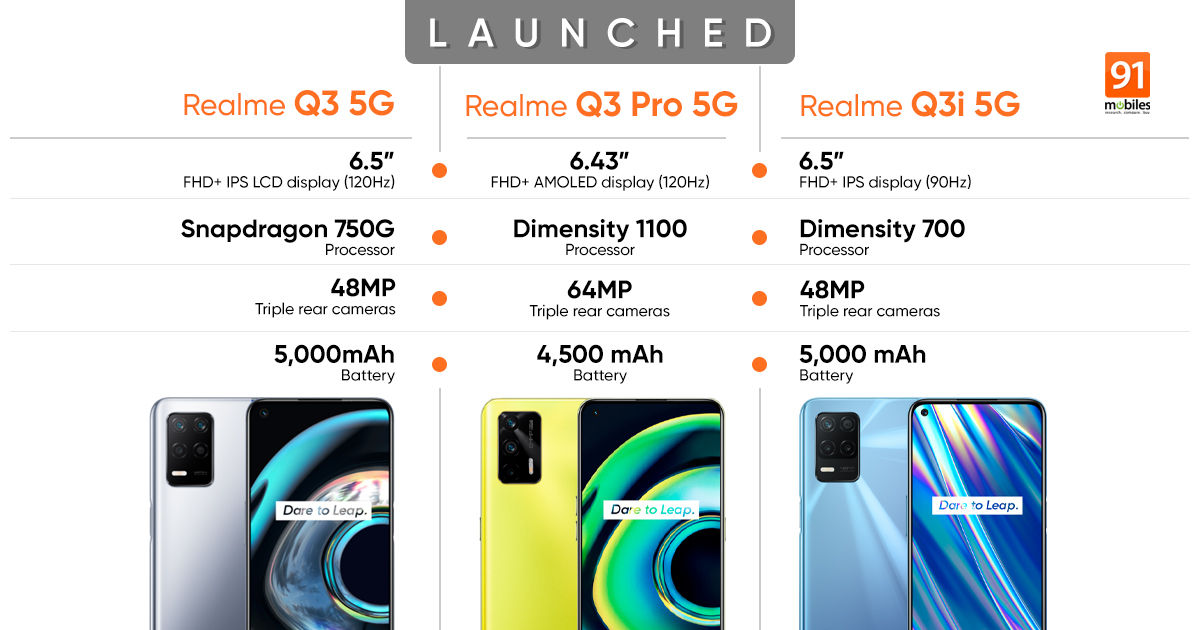 The Realme Q3 Pro is a flagship phone powered by Dimensity 1100 chipset and the Realme Q3 is a mid-range phone with Snapdragon 750G chipset while the Realme Q3i is the Chinese version of the Realme 8 5G.

The Realme Q3 Pro is powered Dimensity 1100 processor. It is an octa-core 5G chipset built on a 6nm process. The chipset has eight cores with four Arm Cortex-A78 cores operating at 2.6GHz and four Arm Cortex-A55 efficiency cores. The nine-core Arm Mali-G77 GPU will take care of graphics. The Realme Q3 Pro comes in two options – 8+128GB and 8+256GB. There is also a liquid vapour cooling system.

The Realme Q3 Pro comes with a 6.43-inch Full HD+ 120Hz refresh rate and 360Hz touch sampling rate. It is a Samsung made super AMOLED panel. A 4,500mAh battery pack is powering the device with 30W USB Type-C fast charging support. In the camera department, the device sports a 64MP main shooter, an 8MP wide-angle camera, and a 2MP macro shooter. In terms of selfies, the device sports a 16MP punch-hole camera.

The Realme Q3 is powered by Snapdragon 750G, an octa-core processor clocked at 2.2GHz and built on an 8nm fabrication while the graphics are taken care of by the Adreno 619 GPU. Qualcomm’s X52 5G modem is also present for 5G connectivity. It is available in 8+128GB and 8+256GB options.

For visuals, the Realme Q3 comes with a  6.5-inch Full HD+ LCD display with a 120Hz refresh rate. In the camera department, the device sports a 48MP main camera, an 8MP ultra-wide camera, and a 2MP macro lens. There is a 16MP selfie caveat too. The Realme Q3 also packs in a 5,000mAh battery with 30W fast charging.

The Realme Q3i is basically Realme 8 5G which was launched in India yesterday(April 22). MediaTek Dimensity 700 processor coupled with up to 8GB RAM and 128GB storage. It has a 6.5-inch Full HD+ display with a 90Hz screen refresh rate. In the camera department, the Realme 8 5G sports a 48MP Samsung GM1 main camera with f/1,8 aperture, a 2MP B&W portrait lens, and a 2MP macro shooter. Selfies are handled by a 16MP punch-hole camera.

In terms of battery the device packs in a 5,000mAh battery, but the charging speed is limited to 18W. The device runs on Realme UI 2.0 based on Android 11 out of the box and weighs 185g and is thick at 8.5mm.