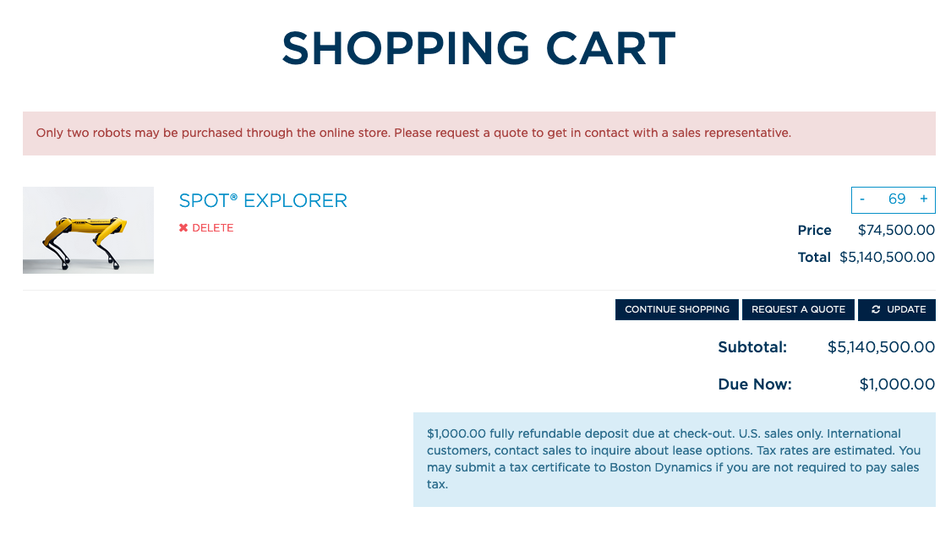 Why lease a threatening metal hound, when you can own?

As of today, you can officially buy your very own $74,500 robot dog. Boston Dynamics, the company also behind that random parkour bot, announced Tuesday that its four-legged creation is finally for sale.

The robots, which can lecture parkgoers about social distancing and pull trucks, were previously only available to the public via a “short-term lease.” No more. Assuming they place an online order today, any U.S.-based billionaire can have their very own fleet of future dogs in six to eight weeks.

Although, it’s worth noting, the Boston Dynamics online store limits the amount of Spots an individual can purchase to two at a time. Any more than that, and you’ll need to “request a quote to get in contact with a sales representative.”

If you do purchase two, the online store notes that “Spot comes ready to operate, right out of the box. With its flexible API and payload interfaces, Spot can be customized for a variety of applications.”

No mention as to whether or not one of those applications just so happens to be chasing away the hordes gathered at your gates to demand that you and the rest of the billionaire class pay your fair share of taxes.

According to Boston Dynamic’s founder Marc Raibert, Spot is actually designed to aide humans in at least some situations.

Interestingly, the makers of Spot are explicit that said “dangerous” work doesn’t include chasing down people.

SEE ALSO: This ‘blind’ robot dog can hunt you even on a moonless night

“Spot should never be used to harm or intimidate any person or animal or for any illegal or ultra-hazardous purpose,” reads the FAQ. “Our warranty of Spot becomes void and we may disable some or all of its functionality upon any such use.”

So, the next time someone gleefully sends their tablet-controlled Spot after you, you’ll at least have the satisfaction of knowing that the robot’s warranty may be voided as a result.

The future sure is grand, ain’t it?