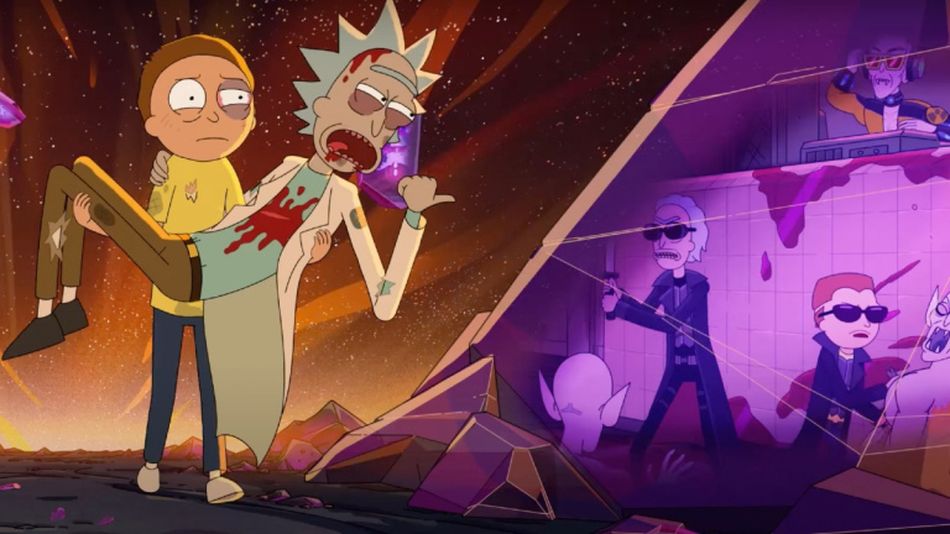 There are few shows that carry quite as much meta baggage as Rick and Morty. But if the Season 5 premiere (titled “Mort Dinner Rick Andre”) is any indication of what’s to come, the beloved Adult Swim comedy is treating 2021 like the clean slate it so desperately needed to not buckle under the weight of its own cultural significance.

Ever since its transformation from the weird little fucked-up cult favorite underdog into a full-blown mainstream phenomenon so popular that hardcore fans nearly caused riots at various McDonald’s in 2017, the subculture bred around Rick and Morty has threatened to overshadow the show itself.

There was the added pressure of sky-high expectations causing year-long delays between Seasons 2 and 3, and a vocal minority of fans who harassed Season 3 and 4’s new women writers, and the subsequently memed stereotype of those insufferable Reddit edgelord-type fans, and then the creators’ public denouncements of said fans, and open discussions over how to create a more sustainable writing process for their unprecedented 70-episode deal in 2018.

For some time now, part of the tense anticipation for each new season of Rick and Morty has been speculation over how these off-screen battles would impact the show’s long-term arc. Will this season be fundamentally different from Rick and Morty of years past? How will they approach the more serialized, season-long plotlines? Will changes in creative direction make it better or worse? Can it even live up to the oversaturated hype of it all at this point?

The show’s excellence, and escalating fervor of its fandom and critical attention, reached a level of noisy online chatter surpassed only by even bigger global sensations like Game of Thrones. And as that show’s final season proved, mishandling this meta relationship with your avid fandom — either by ignoring it or catering to it too much — can lead to disaster.

Season 4’s response was to double down on the show’s natural tendency toward meta-commentary, embedding the creators’ anxieties about the show’s identity into the episodes. More than once, characters echoed a common online edgelord refrain that demanded they go back to “classic” Rick and Morty adventures. More egregiously, the sixth episode’s plot basically boils down to a string of dense, straight-to-camera in-jokes about co-creator Dan Harmon’s now-infamous storytelling structure.

The effect of this excessive navel-gazing on the overall season was, to many critics and fans, lackluster — though even a lackluster season of Rick and Morty is still pretty damn great.

Rick and Morty Season 5 is done getting in the mud with us.

Whether or not the creators took this general consensus about Season 4’s disappointments to heart, what does seem clear is that Rick and Morty Season 5 is done getting in the mud with us. The show is at least trying to mature past that overly self-conscious and self-referential back-and-forth with its own fandom over what Rick and Morty should or should not be.

Season 5’s premiere instead delivers an episode that makes good on the promise that last season only paid lip service to: a hard reset for one of the internet’s most contentious and hotly debated shows.

While the premiere does start in medias res, with Morty fighting to save the duo from some interdimensional threat or another, it isn’t a plot carried over from the last season — as some of the show’s most popular premieres have been in the past. Instead, the titular characters walk, wounded and bloodied, through what appear to be various portals revealing glimpses into their other potential realities. When they take off on their spaceship, Rick and Morty leave behind these potential plotlines (some maybe even referencing popular fan theories) to implode on themselves.

While more subtle than Season 4’s overt meta-commentary, the symbolic message to viewers reads loud and clear. After crash landing back home, the episode then launches into a wholly unrelated and delightfully bizarre plot about a nemesis of Rick’s we’ve never seen before.

The Season 5 premiere doesn’t necessarily feel like a return to “classic” Rick and Morty, and nor does it feel like a dramatic departure. But the episode’s straightforwardness, relying more than anything on the show’s trademark rapid-fire joke-to-page ratio, is a welcome shift. Another internal battle debated among critics and fans revolved around whether or not the show was still properly balancing its own headassery with enough humor, or too often belaboring highfalutin concepts and/or emotional character arcs that lost the pure comedy of it all.

Some storylines have definitely carried over, like Rick dealing with the Season 4 power dynamic shift that ousted him as the Sanchez family’s authoritative patriarch. Beth and Jerry’s ongoing marital journey is another highlight, of course. But these more ambitious long-term arcs are kept as added background texture, while the full focus of the episode remains on a self-contained and joyfully non-sequitur plot that packs a whole season’s worth of emotional stakes into 22 minutes.

Rick and Morty‘s writers seem to have finally succeeded in letting go of all the “shoulds” they thought they were beholden to: We should address the fandom’s toxicity, we should take back our show from the edgelords, we should go back to the beginning, we should keep outdoing ourselves, we should be smart, we should raise the show’s narrative stakes every season.

By replacing its “shoulds,” it’s more grounded than ever in simply doing.

This all necessarily creates more distance between the show and its avid fans, which some might experience as a loss.

Now, this all necessarily creates more distance between the show and its fans, which some might experience as a loss. There is more of a wall between creator and viewer, making it feel more traditional (if you can call anything Rick and Morty “traditional”) and less personal. But sometimes, these traditions are in place for a reason. A greater division between the show’s world and ours feels like the right move to serve the longevity of Rick and Morty‘s quality and timelessness.

Like most things in life, though, that shift comes with it a mixture of gains and losses.

The Season 5 premiere is one of the most laugh-out-loud funny episodes I can remember in recent show history, with the infectious and unfettered joy of creators that have liberated themselves. The episode clearly benefits from a renewed sense of freedom, of letting go of control to instead follow the strange impulses that gave us such classic gags as Mr. Poopy Butthole. It’s also regained more of its universality, requiring less prior knowledge of the show or its surrounding subculture to find the jokes hilarious.

All of that comes with less encouragement to read between the lines, though — removing the promise that rewatches will reveal more about what the writers and characters are thinking about or wrestling with. It’s a loss of that ephemeral kind of intimacy and emotional vulnerability that made Season 3 one of the most electrifyingly human stories to ever play out in a popular mainstream animated comedy series.

But you know, maybe I’m doing the exact thing that created the problem in the first place: over-intellectualizing, with analysis that thinks it’s smarter than it actually is (like a certain genius cartoon mad scientist we know and love).

At the end of the day, Rick and Morty is back, baby. And that’s never a bad thing.