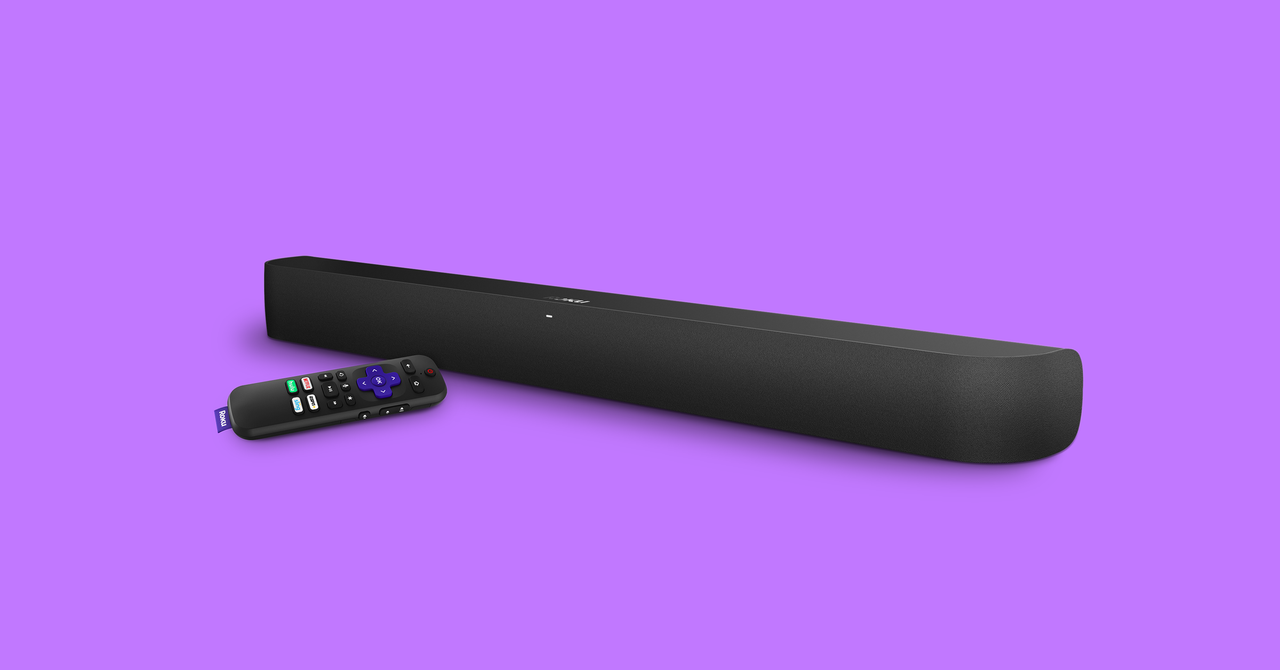 The Roku Smart Soundbar is exactly what you think it is: a soundbar with a Roku player built in. An entertainment turducken, it stuffs half a gajillion media apps inside a streaming player inside a speaker system. Just add a TV and couch and you’ve got a complete home theater package.

Plop the 32-inch-long log under your TV’s chin, plug it into your HDMI port, and you’re set to start consuming audio and visual content galore. That’s the pitch anyway, but unfortunately, it’s just not that simple. Even after the expectedly kludgy setup process, there are some little complications that pop up during daily use that make the experience imperfect.

Before I go any further, I should note that this review is for the regular Roku Smart Soundbar, and that an onn.-branded Roku soundbar also exists. That one is cheaper ($130 instead of $180) and exclusive to Walmart. It has smaller drivers, though, and only puts out 40 watts versus the regular Roku soundbar’s 60 watts.

The Roku ecosystem consists of thousands of channels, including the big names like Netflix, Hulu, and Amazon Prime, and lesser known players like Vudu, GoNoodle, and CuriosityStream. It’s super convenient to have all your media outlets in one place—plus, seeing all those apps clustered together on your Roku’s home screen helps remind you of just how many streaming services you’re paying for.

The soundbar comes with a dedicated remote, which has a built-in microphone that enables you to use voice commands to control the volume, search for movies, or launch specific channels. The Roku app, which you can download onto your phone and pair with the soundbar, works as a more expansive controller. It’s useful for searching for titles, and for typing in account usernames and passwords with your thumbs. You can also cast videos to your television from the other apps on your phone, assuming the app you’re using has a Roku channel to match. You can pump sound from another device, like a videogame console, that’s connected to the TV via HDMI, though that’s where it gets tricky.

You will only have a seamless experience if your TV is equipped with an HDMI ARC port. This feature is common in newer or more expensive TVs. It’s a form of the HDMI standard that lets devices send both sound and picture data through the same cable; regular HDMI just allows for the visuals. If your television does not have HDMI ARC, you’ll also need to connect an optical audio cable (one comes with the soundbar) to use the soundbar with anything else other than the Roku player.

This arrangement gets a little messy if you want to switch between audio inputs—if you have more than one game console, for instance. To get audio from another device to come through the Roku soundbar, you have to manually change the audio input on the TV (for me, this required using a separate remote) and then disconnect the Roku’s HDMI cable, but leave the optical cable attached. I found myself scrambling for wires like an old-timey switchboard operator whenever I wanted to play some Horizon Zero Dawn. Apparently, that’s the sacrifice you have to make if your TV is more than a few years old.

But on to the most pertinent question: How does the soundbar … sound? In short, it’s pretty dang nice. Four 2.5-inch drivers pump the sometimes thunderous vibrations throughout the room. Just about any good soundbar option is going to be leagues ahead of the tinny speakers inside your TV, but Roku’s entry sounds great. Perhaps it may not satisfy the audiophile who will settle for nothing less than the immaculate sound waves of something that’s just stupid expensive, but I think it makes movies and shows sound damn good.

The bass can be a tad overpowering sometimes, especially if you’re watching a talk show or a program that’s mostly voice-over. I don’t really need a YouTube video essay to rattle my picture frames. That said, the lumbering lows are lovely for movies and games. Even a sound as simple as the little bloop when you use the telescope in The Legend of Zelda: Breath of the Wild rings out with a satisfying rumble. The soundbar’s range keeps the audio from feeling muddled, but it also meant that I had to frequently flip through multiple audio options to match whatever was playing. (More on that in a minute.)

For plumbing more sonorous depths, there is the optional Roku Wireless Subwoofer (another $180). You can stick this big black block anywhere in the room, provided there’s a nearby electrical outlet, and it will sync up with the soundbar wirelessly. Depending on the settings you choose, the 250-watt, 10-inch driver goes from subtle to booming. I was worried about it being overpowering, but the sub automatically adjusts itself to nicely complement the volume of the soundbar.

Sometimes the beefy baritones can be a bit disarming when you do notice it. At one point in my testing, the subwoofer lost its connection with the soundbar. Instead of an onscreen warning or something, the subwoofer telegraphed its disconnected status by emitting a steady, low rumble for about half an hour. My girlfriend was watching TV alone at the time, and it took her a while to figure out it was. At first the alert sounds like a heartbeat, thump-thumping at a low pulse. She thought it was just neighbors playing music. Then the sound grew in volume and beat faster and faster, like a soundtrack to a slasher film. This phenomenon later repeated itself the next night when we tried to watch Watchmen. That time, I was able to record the spooky sound.

This digression is intended as a compliment. If the bass can be so deeply unsettling, I’d say it’s doing a pretty good job. And once we got the subwoofer reconnected, it worked just fine. Overall, the sub is a nice addition to the setup, even if not a wholly necessary one. If you’re going to buy it, I’d recommend first snagging the soundbar alone. You can always add the sub later if you want.

You can also pair the soundbar with the $200 Roku Wireless Speakers. I didn’t test how the speaker/soundbar combination might work, as my time with the soundbar was before the two products were compatible. Just note that adding the additional speakers for true surround sound effects is something you can do now, even if it’s probably overkill for smaller living rooms.

The soundbar comes with a few different audio modification options. I usually hate when TV settings alter the intended viewing experience. But, in this case, I actually kind of liked the volume-leveling feature, which averages out the loud and quiet sounds so you don’t have to dive for the remote at every scene change. It’s helpful when you live in an apartment complex and don’t want to start any more fights with neighbors than you have to. I tested this feature by watching Christpher Nolan’s absurdly loud love-is-stronger-than-space opus, Interstellar. In default mode—as the director intended—there’s little warning when the sound suddenly ramps up to wall-shaking decibels. This is great if you’re in an IMAX theater; less so if you’re just trying to watch a movie at home without terrifying your cat. (I am very sorry, Gandalf.) Volume leveling is a welcome relief.

The other sound options are less useful. Night Mode limits overall noise levels so that what you’re watching doesn’t get too loud, but I found it made everything sound a little too compressed, almost like the sound starts clipping after it crosses the upper threshold. Another feature, Speech Clarity, employs an algorithmic process that plucks out the dialog and makes it louder. It didn’t help me much, though I imagine it’s far more beneficial for viewers who are hard of hearing. In general, finding a useful sound mode here requires a bit of a Goldilocks dance, since what works just right varies depending on what you’re watching. Sometimes it’s best to just put it on the default setting and forget it.

As capable as the device is, there are still some annoying bugs. In the few weeks I spent with the soundbar setup, I’ve had to restart the whole system multiple times. At one point the Roku remote stopped communicating with my TV, then resumed working just as suddenly. Sometimes, closed captioning would turn on automatically after I unpaused a stream. There were some connectivity issues as well. The soundbar has Bluetooth capability, so you can connect your phone like you would with a regular smart speaker. But it’s been a pain to pair devices via Bluetooth, even from 8 feet away. I tried to play something from Spotify, and once I finally got my phone connected, music would pause randomly during playback.

I should stress that these incidents occurred when I was using the soundbar on a TV without HDMI ARC. Roku did send me a second unit, which my editor and I hooked up to a TV in the office that had HDMI ARC. We were able to easily pair our phones to that one. Audio from a Nintendo Switch came through that soundbar with no fuss as well. It was a much better experience than having to move cords around all the time.

So where does that put the Roku Soundbar among the crowded field of streaming devices? The $180 price tag is a solid deal for a soundbar, let alone one with a streaming player built in. For comparison, Roku’s premium Ultra player is $100. Instead of buying that, you could pay $80 more and get all the functionality of the Ultra, plus, you know, a whole-ass soundbar. If you’re upgrading from one of the lower-tier Roku devices—say a $50 Streaming Stick or a $30 Roku Express—and you enjoy that ecosystem, the trade-up is pretty much a no-brainer. But I’d recommend caution if you don’t have a newer TV with HDMI ARC, especially if you need to connect additional devices to your television set. It doesn’t seem like a big deal to add a second cord to the mix, but the little inconsistencies that come along can add up to make for a frustrating home theater experience.

When it all works, it works great. You just need a tip-top TV to get the most out of it.

Til dig der har behov for bare at prøve noget helt nyt i hjørring. Hrithik. How to get a cannabis business license in new jersey | new jersey dispensary & grow application.