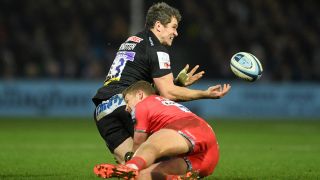 League leaders Exeter Chiefs take a trip up north to Salford to face third-placed Sale Sharks today, looking for their second win in two games since the restart. They extended their lead at the top with victory over Leicester last weekend, a day after Sale slipped up against Harlequins in what was the first Premiership game in five months. Read on as we explain how to watch a Sale vs Exeter live stream today and catch all the action from the Aviva Premiership online.

The game begins at 6pm BST on Friday evening, which is 1pm ET / 10am PT for fans based in America, 5am NZST on Saturday morning in New Zealand, and 3am AEST in Australia. BT Sport has the rights to Premiership rugby in the UK, and this match will be shown on BT Sport 2. If you’re abroad right now, you can use a VPN to watch the game online just as you would if you were at home.

Both sides looked rusty last weekend, but Exeter – up against one of the weakest teams in the league in Leicester – were able to come from behind to record a bonus-point victory. After a dreadful start, Sale threatened to pull off something similar against Quins last week, but their opponents managed to hang on for a deserved win.

It was a disappointing return to action for the Sharks, with new signing Manu Tuilagi not really getting going on his debut – though he did play a huge role in the slick move that created Byron McGuigan’s second-half try.

Tonight’s clash looks set to be a wide-open affair and a treat for rugby union fans everywhere, with Exeter and Sale the Premiership’s runaway leaders in points differential on 173 and 138, respectively. Don’t miss a second of the action – just follow our guide below to watch Sale vs Exeter online and get a Premiership rugby live stream from anywhere.

Sale vs Exeter live stream: how to watch Premiership rugby online in the UK

Subscription channel BT Sport shares the rights to Premiership rugby in the UK with free-to-air Channel 5, but Sale vs Exeter is exclusive to BT Sport. It will be shown on BT Sport 2, with coverage starting at 5.30pm BST ahead of a 6pm start.

Don’t forget that BT introduced a new £25 monthly sports pass this season, so you can get all that BT Sport goodness without a long-term commitment.

If you’re looking to stream tonight’s match, the BT Sport app or BTSport.com is where you need to go, enabling mobile, tablet and PC viewing.

If you’re outside the UK and want to watch Sale vs Exeter, don’t worry about geo-blocks on your account – simply grab a VPN and follow the instructions above to live stream the action just as you would if you were at home.

How to live stream Sale vs Exeter: watch Premiership rugby in Australia

Fans of UK Premiership rugby Down Under can tune into all the action on Fox Sports 505 – available through Foxtel. Coverage of Sale vs Exeter starts at 3am AEST on Saturday morning. You’ll need its sports package added on to the base package, so don’t expect it to be cheap.

How to watch Sale vs Exeter: live stream Premiership rugby in New Zealand

Premiership rugby coverage is provided by Sky Sport, but Sale vs Exeter unfortunately isn’t being shown on Sky Sport 1 this weekend.

UK residents in New Zealand can use the VPN route described above to tune in to their service of choice just like they would at home.

How to watch rugby union online in the US: Sale vs Exeter live stream

Rugby union fans based in the US can tune into Sale vs Exeter with NBC Sports Gold, from 1pm ET / 10am PT.

In Canada, Sale vs Exeter is on SportsNet, with kick-off set for 1pm ET / 10am PT.