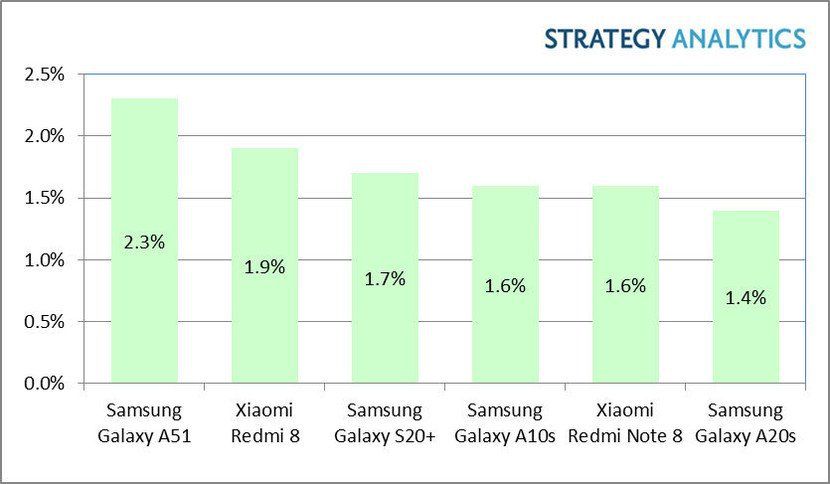 People are increasingly buying midrange Android devices over their more premium alternatives, data from research firms suggests. Strategy Analytics reports that Samsung’s midrange Galaxy A51 was the bestselling Android phone in the first three months of the year, followed by Xiaomi’s Redmi 8. The Galaxy S20 Plus was the only flagship phone in the firm’s top-six ranking, where it came in third.

Recent research from Canalys paints a similar picture, although the two disagree slightly on which specific midrange Android phone sold the most, potentially due to the different ways they’ve counted their handsets. Canalys counts the Redmi Note 8 & 8T as a single device (which they essentially are, barring the 8T’s support for NFC), and places it in first, ahead of the Galaxy A51. However, they both agree that among Android phones, midrange models are dominating.

It’s not an entirely new trend. Previous reports said that the bestselling Android phones of 2019 were also cheaper Galaxy A-series and Xiaomi Redmi models. But Winter’s comments suggest that the trend towards cheaper Android phones has continued into this year, and is accelerating as a result of post-virus economies.

Apple appears to be the exception to the rule. Canalys pegs the iPhone 11 as the bestselling phone of the first quarter of the year, with the iPhone 11 Pro Max and Pro taking the sixth and tenth spots respectively. But now that Apple has made a serious effort to re-enter a more affordable price category with the new iPhone SE, next quarter’s data could show the price-sensitive trend spreading to iOS.