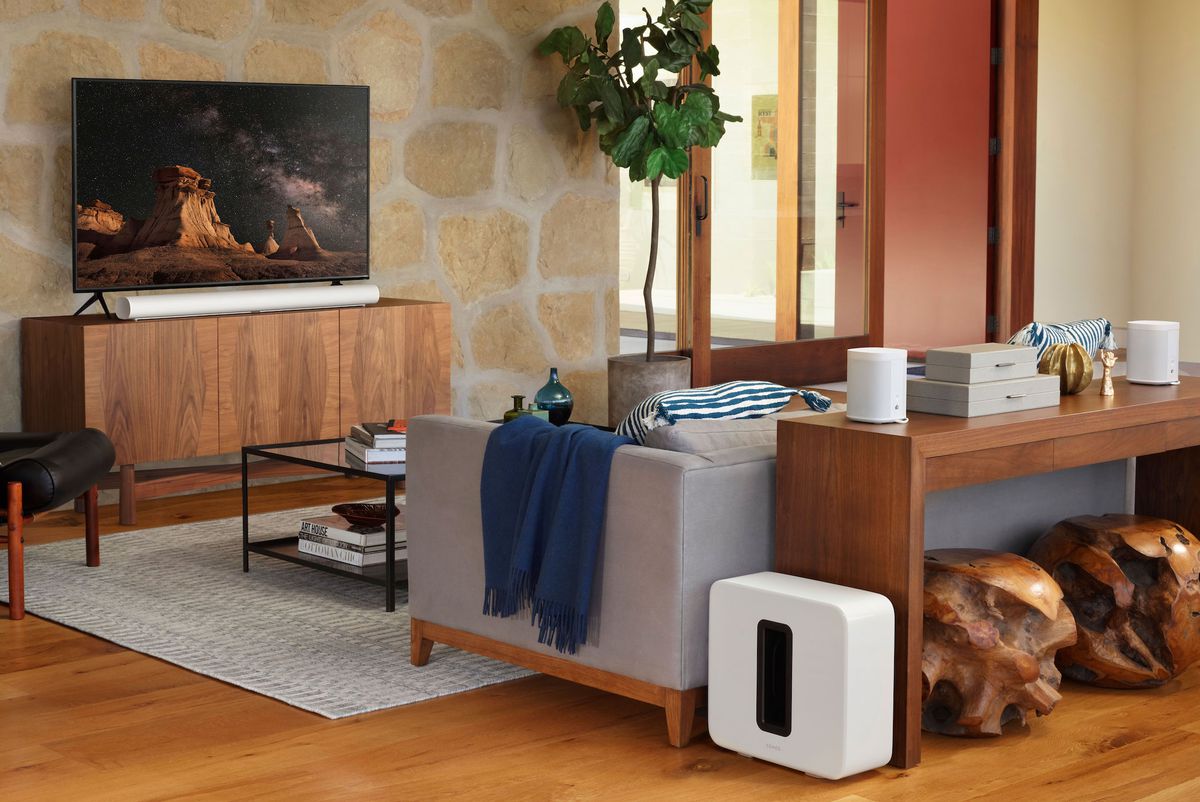 Sonos is finally making its long-awaited push into Dolby Atmos home theater audio. That effort starts with the new $799 Arc, a premium soundbar that replaces the Playbar in Sonos’ product lineup. The oddball Playbase speaker, designed to fit underneath some TVs, is also being discontinued today as Sonos simplifies your options to just the Arc and Beam.

It isn’t cheap at $800, and it’s $100 more expensive than the Playbar, but Sonos claims that the Arc sets a new standard for the soundbar category. It’ll be released on June 10th and will only work with the new Sonos S2 app when that launches on iOS, Android, Windows, and Mac early next month. The Arc, third-generation Sub, and Sonos Five are the first products built on the company’s S2 platform, which will allow for higher-fidelity audio (as evidenced here by Atmos), improved security, and other new features that Sonos isn’t ready to talk about.

The Arc will be available in either black or white, and it features an elongated, matte plastic design with 76,000 holes drilled into the casing. Most Atmos soundbars including those from Vizio are blocky, and Sonos is very proud of the 270-degree curved grill on the Arc. (Yes, that’s partly where the name comes from.) The longer form factor is the direct result of consumer buying trends; 65-inch TVs are now commonplace, and people are increasingly going even bigger when their living room allows for it. If you’re in a cramped apartment with a smaller screen, the Beam might be a more sensible pick.

Inside that outer shell are 11 drivers that fire audio all around your room to create immersive, multidirectional sound. As with most soundbars, the center channel focuses on dialogue clarity so you don’t miss what’s being said in a movie or TV show. The left and right channels, along with the surround and up-firing height speakers, all increase the sense of spaciousness and immersion that comes out of the Arc. As always, Sonos kept music playback in mind when designing the product and says it delivers neutral audio with an ultrawide soundstage thanks to those eight woofers and three tweeters.

The Arc can play PCM stereo, Dolby Digital 5.1, Dolby Digital Plus, and Dolby Atmos audio. DTS and multichannel PCM audio are not supported. It automatically optimizes what the drivers are doing in each scenario. For example, if whatever you’re playing on the TV doesn’t feature Atmos audio, the upward-firing speakers will instead focus on low-end response.

Generally, you’ll need a TV purchased within the last couple years that has an eARC HDMI port — and a 4K Blu-ray player — to take full advantage of the lossless Atmos playback that the Arc is capable of. But even if your set is a bit older, you should be able to get compressed Atmos over regular ARC through a variety of streaming services such as Netflix, Amazon Prime Video, and Vudu.

On its own, the Arc can serve as a 5.0.2 Atmos system; it always mixes seven-channel audio feeds down to five. But you can build out from there with rear surrounds — this is why the One SL speakers exist — and the Sub. (Sonos is refreshing the Sub today with improved processing power, more memory, and a new wireless radio. Otherwise, it looks the same as before and carries the same $699 price.) Even those Sonos and Ikea bookshelf or lamp speakers can be integrated into the Arc system if you’ve got a pair of them.

Aside from rumbling bass, the main benefit to adding the Sub into the mix is that it lets the Arc offload those low frequencies. When it doesn’t have to do everything, the soundbar adjusts its sound profile to focus on high- and midrange frequencies for a fuller, richer listening experience since the Sub is handling the low end.

Like the Beam, the Arc has built-in microphones for hands-free voice controls with either Amazon Alexa or Google Assistant. Apple’s AirPlay 2, a standard feature for recent Sonos devices, is also supported.

The Arc plugs into your TV’s eARC or ARC HDMI port; there’s still an HDMI-to-optical adapter in the box if you prefer that connection method, but you won’t be getting Atmos if you go optical since it can’t handle the necessary bandwidth. It would’ve been nice for Sonos to include HDMI passthrough, but nope: it’s just the one port.

Once you’re all plugged in, you’ll be able to tune the Arc’s output with the Sonos app on an iPhone or iPad by using the Trueplay feature, which optimizes the sound characteristics for your specific room. Trueplay has been enhanced and now factors in ceiling height for the Atmos stuff. Sorry, Android users, Trueplay still isn’t available for your phones, and from my conversations with Sonos, I doubt that’ll change anytime soon. And unlike the Move, which can carry out Trueplay on its own without your help, the Arc still requires the old process of walking around your living room and waving your phone up and down so the Sonos app can get a sense of how the audio will bounce off walls.

Sonos designed the Arc so that it can either sit on a TV stand or be mounted to the wall; if it’s mounted, the soundbar is smart enough to tone down bass resonance by default to keep your walls from rattling. (It uses a magnetic sensor to detect this.) There are other small touches to the Arc as well: it’s got an ambient sensor inside that will turn down the brightness of its status LEDs if your room goes dark for movie night. And it’s more energy efficient, using 26 percent less power than the Playbar when idle.

The Arc is likely to be the best soundbar that Sonos has made yet, but even with all the obsessive attention to audio routing and 3D positioning that the company’s engineers have shown, it’s still a soundbar. Sure, it’ll blow away the Beam and perhaps even the Playbar in fidelity, but at this $800 price — especially when you add in the $700 Sub — home theater enthusiasts will also be eager to know how it compares to a proper 7.1 setup with placed Atmos speakers. And though it may outperform most mainstream soundbars, there are still (much) pricier options like the Sennheiser Ambeo that are trying to set new expectations for what one of these bars can do. To see how the Sonos Arc stacks up, stay tuned for The Verge’s upcoming review.