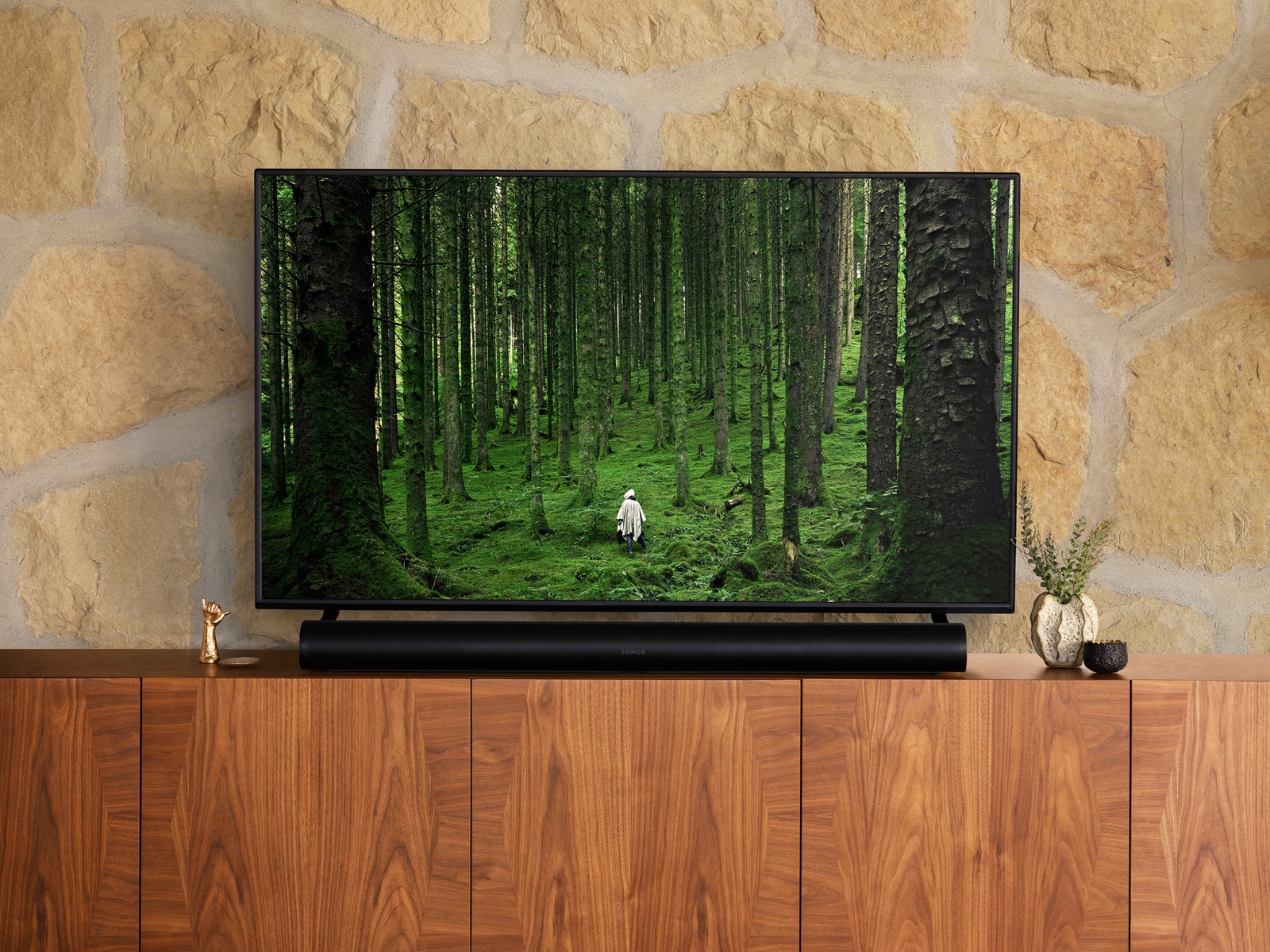 I wish every TV came with a soundbar. Sadly, audio just isn’t a priority for television makers. They keep producing bigger and bigger displays with more vibrant color, filled with more pixels than your eye can see. But by and large, those TV sets sound terrible.

For years, Sonos has made it onto our list of the best soundbars. The company is known for making TV-ready speakers with clear sound and the ability to also act as smart-home devices that connect to any other Sonos speakers you may own. They can play music from your phone just as easily as they can immerse you in a film like Parasite.

The company has a few models to choose from too. There’s the Playbase for pedestal TVs, and the compact Beam for smaller rooms. And now there’s a new option. With the new Arc, Sonos is finally replacing the Playbar, its original top-of-the-line soundbar that debuted back in 2013.

TVs have changed a lot since the Playbar first showed up. Most obviously, they’re much bigger—screens as big as 65 inches are commonplace now, and it’s not rare to see models stretching past 75 inches. The way TVs stand up is also different. Instead of balancing on a central pedestals, most TVs have a pair of feet on each end. The larger sets require a very long piece of furniture to nestle on, unless you go through the hassle of mounting the display on the wall. And many of us now use the HDMI port to connect the TV to a soundbar instead of the optical port. The Arc reflects a lot of these new tastes, stretching 45 inches long—10 inches longer than the Playbar, and nearly matching the length of the bottom edge of a 55-inch TV. (Remember, television screen sizes are measured diagonally.) Its slender shape resembles a long poster mailing tube, or an ovular pipe with an arced (get it?) speaker grille covering almost every inch of it.

The black model I tested (it also comes in white) blends in and disappears under my TV, despite it sitting slightly taller than the old Playbar at 3.4 inches. I have always been a fan of the Playbar, but it never seemed at home lying on a TV stand. It looked best mounted to a wall. The Arc is happy to sit. You can even turn its few indicator lights on or off in the Sonos app.

The long, thin design isn’t lanky. Inside are three tweeters for high-pitched tones and eight woofers for mid-range and bassy booms. If your couch is situated in front of your TV (as it should be!), four of the drivers aim directly at you, two aim out the left and right sides, and two of them arc sound upward. By firing audio waves in all directions, the Arc can faithfully reproduce the surround-sound effects of movies encoded with Dolby Atmos audio if your TV and streaming app of choice also support it. Many newer TVs have a special HDMI ARC port for audio, and it’s best if your television has this port because it simplifies the way you control your home entertainment system. Without HDMI ARC, you’ll have to train Sonos to pick up your TV remote’s volume commands, among other things. (Here are more surround sound and port details.)

Like other Sonos speakers, you can custom tune it to your room. If you happen to own an iPhone, you can walk around with the Sonos app open as the speaker plays a series of tones that help measure the acoustic properties of the room. This didn’t make a noticeable difference in my wooden attic-like testing room, but the Arc already sounded pretty fantastic without tuning.

On its own, the Arc’s upward and side-firing speakers can often project audio a little higher than the TV screen, past its edges, and forward. Audio doesn’t quite envelop you like a full setup with satellite speakers behind your couch and a Sub would, but there is a noticeable 3D effect if you’re viewing something that supports surround sound.

I was rewatching some episodes of The Mandalorian on Disney+, which is presented with Dolby Atmos, and I could hear the main theme’s airy recorder and blasting horns sound like they’re being played in a hidden room behind my TV, just for me. The low rumble of ships passing through space also comes through clearly even without a Sonos Subwoofer paired. If you are able to save up for the pricey $699 Sub, it will definitely add some depth like it did in my tests, but the Arc can hold its own without accompaniment. You can read about my favorite Sonos speakers and surround setups here, with recommendations for all kinds of speakers. I’ll soon update it to include the Arc.

The Arc also knows how to listen. Like the Beam and many high-end soundbars now, it’s also a voice-enabled smart speaker. Unlike most competitors, it will work with both Alexa or Google Assistant (you must choose one or the other)—or Siri via AirPlay. Using voice commands, you can do things like turn off your TV, pause playback, or adjust the volume. And naturally, you can ask it the weather too. The Arc’s four far-field microphones picked up my voice over the sound TV shows like Space Force (which does get a little better as it moves along) without a hitch.

If you’re new to Sonos, you should know that the company continuously sends out software updates for its speakers for as long as possible. It did recently attempt to retire some of its early speakers, but after some outcry from its users, decided to continue supporting them for the foreseeable future—though they won’t get new features, and you’ll need two apps if you want to run pre-2010 Sonos speakers and an Arc on the same Wi-Fi network.

The Sonos app also lets you use the Arc to listen to music. I’m sure there are music services that aren’t supported by Sonos, but the list of what is supported is exhaustive. The Arc’s sound profile does flatten out a bit when you play music just so your tunes sound more natural, and it’s as good a way as any to listen to music on a smart speaker.

Is It for You?

I spent most of this review praising the Arc. Sonos is known for having an Apple-like attention to detail when it comes to the user experience, and that hasn’t changed here. The Arc is a fantastic soundbar with a lot going for it.

The only downside is the price. The Arc costs $799 on its own. It’s not an incredibly steep price for a Dolby Atmos bar with built-in surround sound, but a good bare-bones soundbar with a sub can cost as little as $150. The extra $550 you pay for the Arc affords you a premium audio experience, entrance into Sonos’ seamless streaming ecosystem, and all that smart speaker functionality baked in. Still, it’s a hefty price, especially without an included subwoofer. But the Arc really is an outstanding speaker, and a wonderful way to turn a simple TV into a full-on home theater.