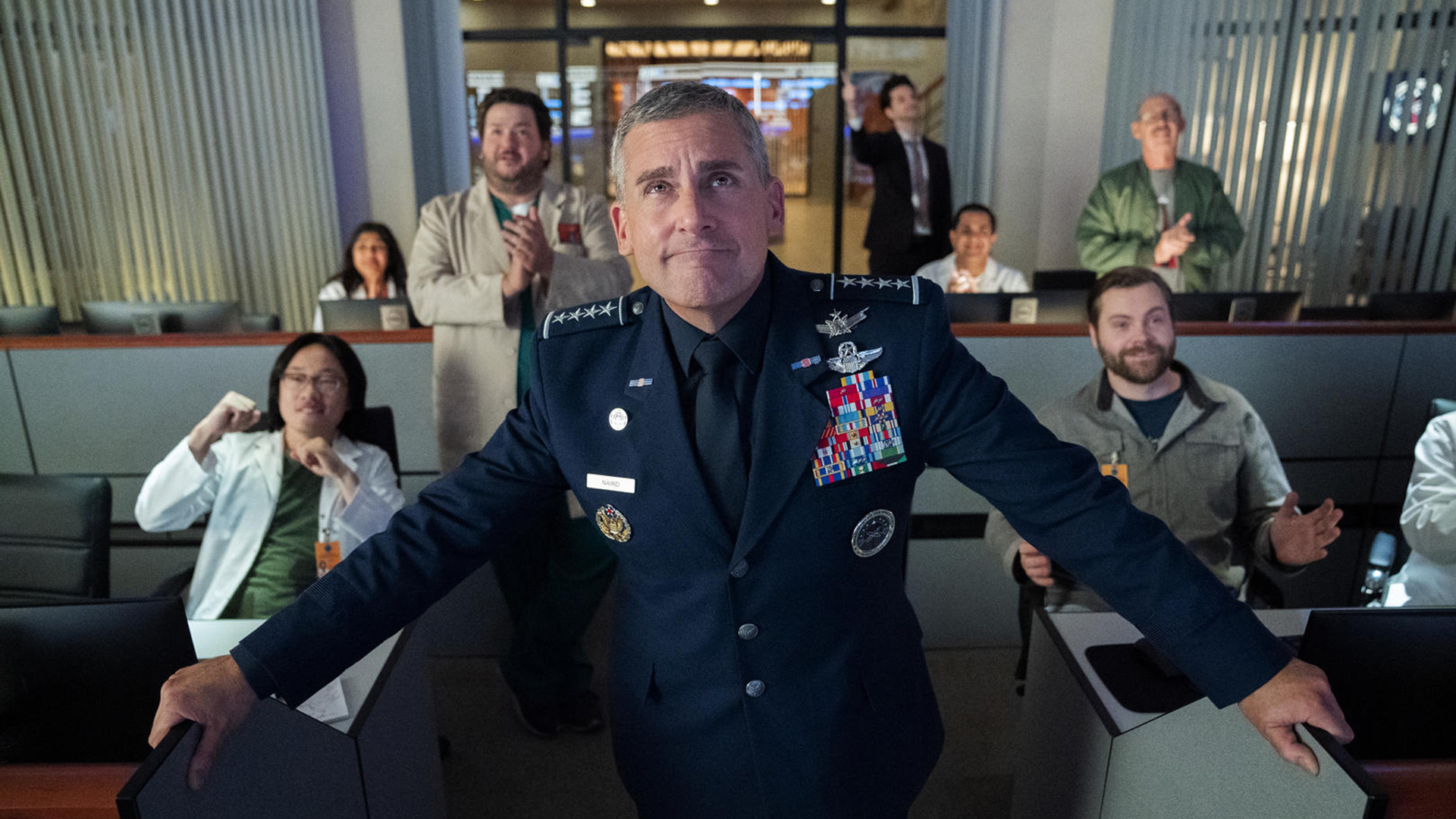 After The Good Place, it feels like we’ve seen a spike of ‘big idea’ comedies that look a lot more expensive than traditional sitcoms. In 2020 we’ve had HBO’s space station-based Avenue 5, which kicked off with such a disappointing opening episode that I didn’t continue with it, and Amazon Prime’s Upload, set in a digital afterlife where niceties are bought with microtransactions.

Things aren’t as straightforward at Space Force as Naird hoped. A science versus military tension exists at the heart of this branch, with Dr Adrian Mallory (John Malkovich) pushing back on the branch’s more aggressive ambitions. The existence of Space Force itself and how much it costs is under scrutiny. And Naird himself is forced to move his family across the country for his new job, which creates tension with his daughter Erin (Diana Silvers).

Reaching for the stars

The Space Force concept is so big that it sometimes feels like it gets in the way of the show being what it really is: a workplace sitcom. A few of the episode plots feel like they could be from earlier seasons of The Office, if you remove the space context. Take the fifth episode, which is themed around war games, with Space Force competing against the air force in a series of team-building exercises for bragging rights. This plot is in most ’90s sitcoms in some form, except here the budget is a lot higher and you’ve got John Malkovich in the cast.

As a parody of the American military, Space Force isn’t as rich for jokes or satire as I hoped, probably because its real life counterpart seems just as outlandish. Even when the main Space Force idea drives the story, like in episode two where Naird and his team of scientists try to instruct a chimpanzee to repair a satellite, it’s just hard work to watch. Jokes about space chimps just seem very out-of-date, even with Space Force’s expensive-looking CG simian.

It just doesn’t find enough to do with its main idea, and laughs are fairly thin on the ground.

That said, Space Force is breezy enough viewing, and my investment in the characters slowly increased over the course of the episodes. It’s just not as funny as I hoped it would be given the caliber of the show’s talent. And maybe after a couple of months in lockdown where streaming is one of a limited selection of hobbies, my expectations might’ve been slightly too high.

Maybe I’m just being grumpy, but the reason Daniels’ past creations (Parks and Rec, The Office, King of the Hill) resonated is that they brought humor out of the mundane. Maybe Space Force can be a good vehicle for jokes, but here there just aren’t enough good ones. The episode length, which frequently exceeds 30 minutes, makes the show feel languid, too. I wonder if the same episodes forced into a traditional 20 minutes might improve the pace of the show, and result in a higher rate of jokes per minute.

Space Force’s ensemble is the best thing about it. Carell, also a co-creator, is a major get for Netflix, and alongside him and Malkovich you have Friends’ Lisa Kudrow and Parks and Rec’s Ben Schwartz. You’ll see many more familiar US sitcom regulars, too. The series also features the final TV performance by actor Fred Willard, and he is a treat to watch here.

Netflix US will lose The Office at the end of 2020 and gain Seinfeld in 2021. Old comedy is still important to the world’s most popular streaming service, and Space Force is a valiant attempt to give subscribers a newer offering to get excited about. It’s just not as funny as it should be.

Like The Office, maybe Space Force will take a second season to really hit its stride.