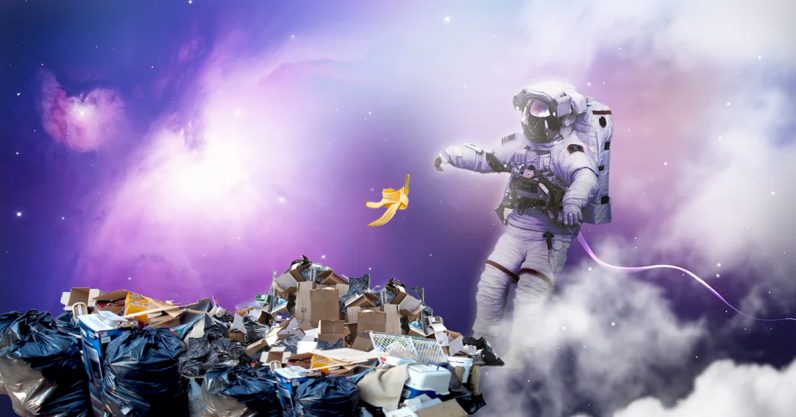 Since the launch of Sputnik 1 in 1957, the lower orbit around the Earth has become an increasingly congested environment with more than 2,200 satellite launches to date. Those satellites – along with launch vehicle components and debris from mechanical disintegration, collisions, and explosions – now fill this region with a “fog” of space debris.

And it’s getting busier. In the last few weeks, SpaceX has launched 60 new satellites as part of its Starlink program. This brings the total to currently around 400 Starlink satellites in low Earth orbit as part of a program that aims to bring cheap, satellite-based internet access to everyone. Eventually, this program could place nearly 12,000 satellites in orbit around the Earth.

Read: [An astronaut got a blood clot in space — here’s how it helped science]

With Amazon, Canada’s Telesat, and others planning satellite constellations of similar scale, low Earth orbit is becoming ever more crowded.

The debris ranges in size from a few microns to many meters. Stuart Grey, an aerospace engineer at the University of Strathclyde, has produced a stunning visualization that highlights the more than 20,000 objects over 10cm in size now orbiting the Earth (see video above). But there are many millions of particles 1mm in size and smaller.

Closing our window on the universe?

Amateur astronomers are already expressing concern over the increasing number of bright, moving objects in the night sky. But the worry is perhaps much greater for the professionals.

Crowding in low Earth orbit has inevitable consequences for ground-based astronomers. Bright surfaces on satellites can reflect rays from the sun – giving rise to a burst of sunlight directed towards the surface of the Earth. Such intense bursts of light are much stronger than the weak light sources typically being observed by astronomers and will impede observations of distant objects in space.

Billions have already been spent on existing optical telescopes, and many more billions will be poured into new platforms in the next decade, such as the European Extremely Large Telescope being built on the Atacama plateau in Chile. There is intense competition for observing time on such resources, so any potential threat from satellite reflections must be taken seriously as they may make some of the observations driving our understanding of the evolution of the universe impossible.

SpaceX has assured the public that Starlink will not contribute to this problem and says it has been taking steps to mitigate the impacts of its satellites on observational astronomy – even to the extent of testing whether a black coating on its satellites can reduce visibility, and adjusting some of the satellites’ orbits if necessary.

With some 3% of its planned constellation launched, SpaceX is at least responding to the concerns raised by astronomers. Hopefully, other agencies planning satellite constellation launches will also be upfront with their plans to reduce this serious problem to astronomical observation.

But crowding in low Earth orbit also has consequences for satellites and other space vehicles, including those designed to carry humans. To achieve orbit, satellites seek a balance between their speed and the effect of Earth’s gravity on them. The speed with which a satellite must travel to achieve this balance depends on its altitude above Earth. The nearer to Earth, then the faster the required orbital speed.

At an altitude of 124 miles (200km), the required orbital velocity is a little more than 17,000 miles per hour (about 7.4 km/s). Any object shed by a satellite or other vehicle in orbit will maintain the same orbital speed. Collisions between such objects can, therefore, occur at combined speeds of potentially up to 34,000 mph at 124 miles (if it is head-on). The effects of such impacts can be serious for astronauts and space stations – as the dramatic opening scenes of the 2013 movie Gravity depict.

There is impact shielding on satellites and space vehicles which is designed to stop objects smaller than 1cm crashing into them. At best, the shielding will do so – through the electromagnetic impulse created may interfere with electronic systems. At worst, larger pieces of space junk could penetrate the vehicles. This could result in internal damage and disintegration that threaten the safety of the mission.

Space agencies such as NASA and ESA have therefore established orbital debris research programs to observe such debris and develop strategies to control their effects.

There is little doubt that, with the increasing use and commercialization of space, we boost the risk of catastrophic events associated with orbital debris. Agencies, both state and commercial, must recognize this and support efforts to reduce the likelihood of such events by taking steps to remove existing debris and reduce the potential for further debris by removing redundant satellites and other space vehicles. For example, the RemoveDEBRIS satellite uses an on-board harpoon to capture junk.

Only when we resolve the problem of space junk will our window on, and pathway to, space be truly fully open.

This article is republished from The Conversation by Martin McCoustra, ScotCHEM Chair in Chemical Physics, Heriot-Watt University under a Creative Commons license. Read the original article.

Read next: Adobe’s top tips to adapt your commerce strategy during the pandemic