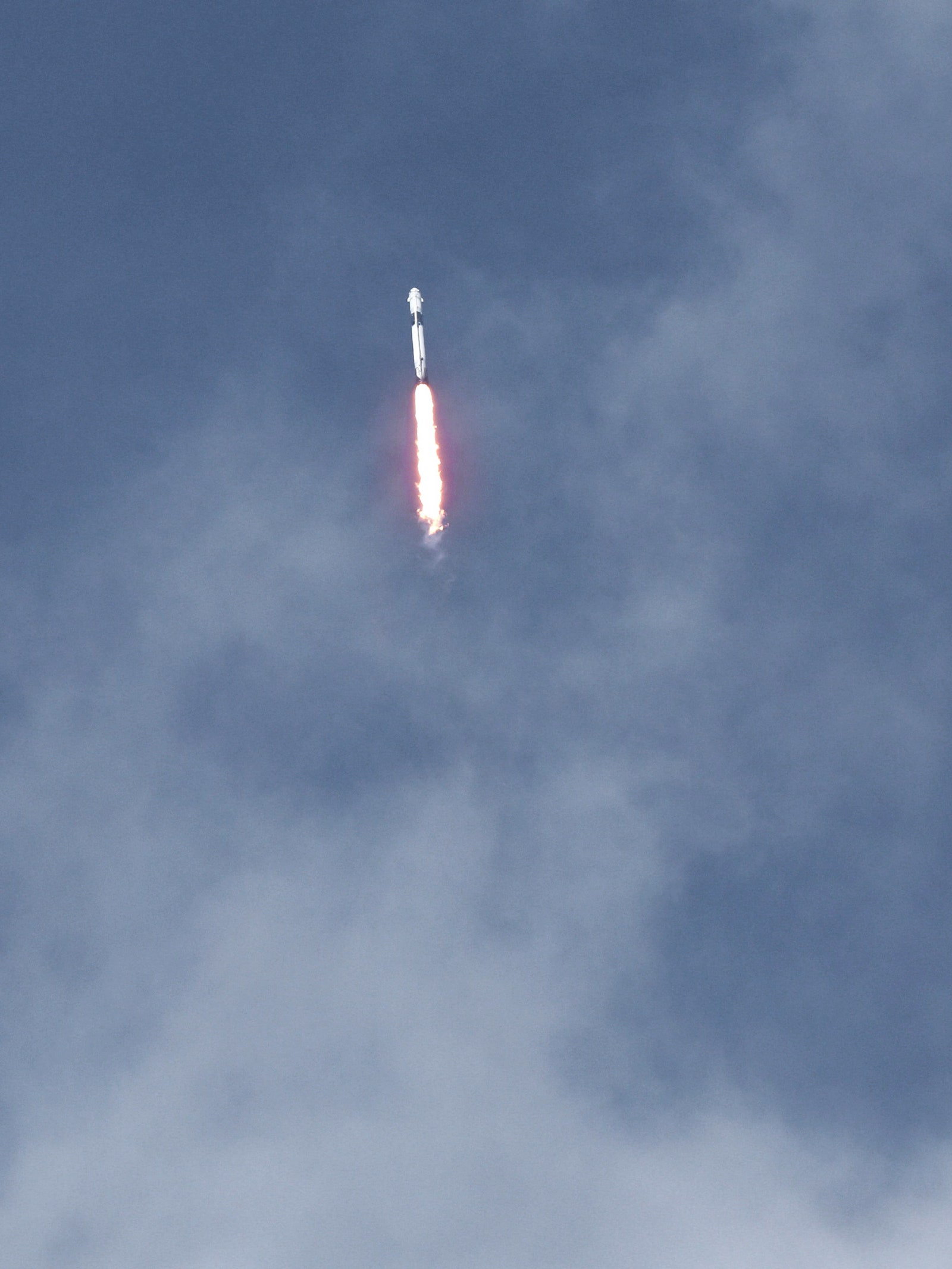 Behnken and Hurley arrive at the pad and emerge from the Tesla’s gull-wing doors in matching white SpaceX flight suits. After stopping to make a last phone call to their families using a phone in the launchpad tower—a NASA preflight tradition—they climb into the Dragon.

Now strapped in, Behnken and Hurley are spending nearly two hours checking out the capsule’s system. Abort system armed? Check. No leaks in the spacesuits? Check. Communication with mission control? Check. Once the initial system check is complete, a small SpaceX pad crew dressed head to toe in black seals the hatch on the capsule and verifies that the pressure holds.

A few miles from the pad, Air Force One touches down on the old shuttle landing strip, carrying President Donald Trump and First Lady Melania Trump. Trump’s administration has made human spaceflight a cornerstone of its extraterrestrial policies. Shortly after taking office, Trump directed NASA to return astronauts to the moon by 2024. Last month, NASA tapped SpaceX and two other companies to develop a lunar lander for future crewed journeys to the moon. The Demo-2 mission is a critical milestone on the path toward that goal.

Their next stop is the press site, where a small viewing area flanked with American flags has been assembled for the president and his entourage. It’s the best seat in the house.

It’s 45 minutes before launch. The crew access arm detaches from the capsule and SpaceX crew begin to load the rocket with superchilled liquid oxygen and kerosene. Thick white plumes billow off the rocket as some of the oxygen vents from the tanks and condenses the water vapor in the humid Florida air.

Elon Musk and a small team of SpaceX mission operators are behind a bank of computers in the glass fronted firing room just across the parking lot from the press site. They are responsible for monitoring Crew Dragon and controlling the rocket right up to launch. At that point, they will transfer control of the mission to operators at SpaceX mission control in Hawthorne, California.

The mission operators give the go-ahead to proceed: “Dragon SpaceX go for launch.”

The Falcon 9’s engines roar to life and spit nearly 2 million pounds of thrust from the tail end of the rocket. The air crackles with the staticky sounds of the nine Merlin engines as they struggle to break the bonds of gravity.

There’s an old rule among sports reporters that admonishes them against cheering in the press box—but the space press corps isn’t bound to such mandates. As the rocket climbs into the hazy Florida sky, cheers erupt from behind the reporters’ masks. Some have been waiting for this moment for years; others, for a lifetime.

The Falcon 9 rocket recedes into the blue. From the ground, it looks like an inverted torch suspended in the sky, a pinprick of flame lighting the way into an inconceivably vast frontier.