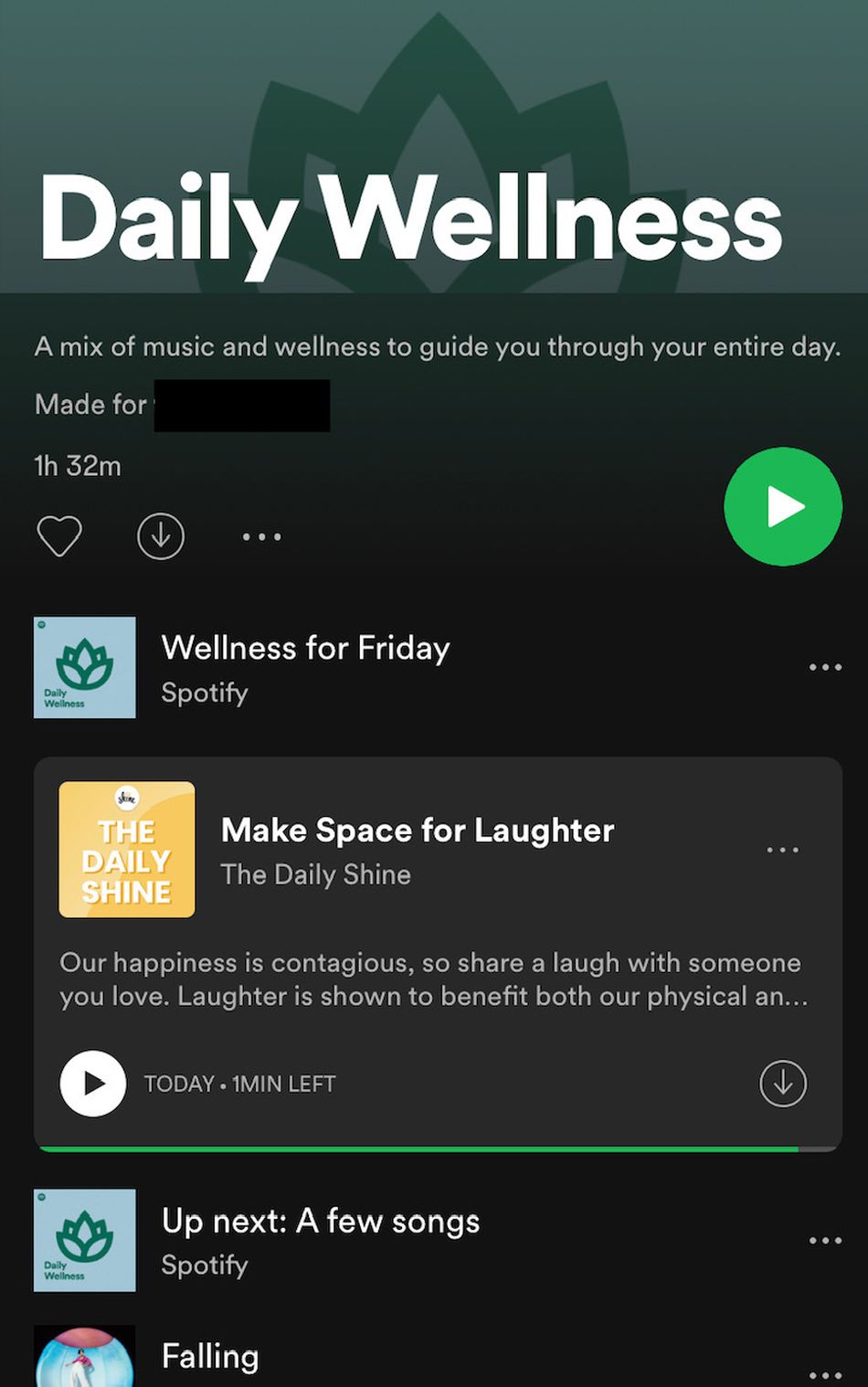 With all the stress in the world — you know, a deadly, terrifying global pandemic — Spotify dropped a new service: a daily, personalized aimed at wellness. Fittingly, it’s called Daily Wellness and I gave it a try.

OK, first, let me drop my biases: I can be a cynical person and I’m pretty high energy — like hyper hyper — which has made meditation difficult for me. I can get both mentally and physically uncomfortable while trying anything resembling meditation or therapy or sincere reflection.

That being said, amid the pandemic — and battling some, let’s say, serious anxiety — I’ve been taking active steps to try to improve my mental health. Therapy, meditation, exercise, whatever else, it all seemed like a good idea to help me get through the day.

So, Spotify’s new Daily Wellness playlist seemed like a natural thing to try out. If you haven’t seen it, it’s basically a curated playlist that mixes music, meditative podcasts, and sort-of motivational content (eye-roll) all into one.

I gave it a go for about a week.

Here’s the basic takeaway: Daily Wellness was fine, but all of the advertisements (despite having a premium Spotify account) and inspo-cringe left me a little cold.

Daily Wellness updates daily (although I had some hiccups with that… more on it later) in the morning and, apparently, in the evening as well. To be honest, I never used the evening playlist because I was busy cooking dinner, washing dishes, doing laundry, pondering life, and binging Schitt’s Creek.

My playlist typically looked like this: a brief, opening meditation podcast from The Daily Shine. Some algorithm-selected songs. A brief Wake Up / Wind Down podcast. Four songs, typically leaning more toward upbeat, indie-ish music. Of course, what music you get will vary widely depending on what you listen to normally. Then I’d get a short podcast about a Daily Quote that would typically try to ~inspire~ me. More songs. A different podcast called The Daily Refresh that featured quotes and breathing exercises. And some songs to finish it off. Your playlist might look different, however, since Daily Wellness is personalized.

It takes a while — over an hour — to get through the whole shebang. And while nobody ever explicitly says anything about the coronavirus or a pandemic, it’s hinted at throughout.

The first time I tried to fire up the playlist the text said it was Thursday but the welcoming voice said it was Friday — it was actually Friday — which was disconcerting, considering how hard it is to remember the date these days. I also never got the playlist to work properly on desktop, where it would skip the podcasts. On mobile, it was smooth sailing. So yeah, things could be glitchy, but I’m also not religious about updating my computer or phone, so it could be on me.

OK, so about those podcasts:

The music, meanwhile, was hit or miss. In general, the songs seemed aimed at being relatively chill. My taste skews toward indie rock, sad guitar-based music, and pop-punk. Beyond one Hozier song I couldn’t stand, the music mostly felt like things you could assume I might be interested in. It never really played anything angry or loud — which a lot of my favorite music is — but I get that’s not a good look for a wellness playlist.

One big plus, I found a couple of songs I didn’t know that I really liked: “Bad Habit” by Your Smith and “Boys In the Better Land” by Fontaines D.C. The algorithm also made a couple of safe bets by seemingly including Phoebe Bridgers and Haim every day. I’m a huge Bridgers fan and I listen to Haim pretty often. The playlist also resurfaced a few older songs I adore — namely “Me and Julio Down by the Schoolyard” by Paul Simon and “Dreams” by Fleetwood Mac — but don’t listen to enough.

A portion of the playlist each day felt like Mumford & Son knockoff bands, throwing out plucky positive songs. No thanks. In general, the music was pretty good though. I wrote articles as I listened to the playlist most days and it was good, vibey music for that purpose.

idc, spotify makes me feel loved. the curated playlists that never fail me, the wellness playlist. the daily drive. spotify will hold your hair back when you’re throwing up. she’ll rub your back when you cant sleep.

My therapists will be happy to know that after years of BEGGING me to try meditation, all it took for me to partake was Spotify using my data to create a Daily Wellness playlist!

Wrapping this up, I just want to again admit my biases. Maybe I’m being too negative. Some people seem to really enjoy Daily Wellness and I think it’s worth trying out. In fact, any tool that might be able to help you through this weird time is a tool worth trying.

I’m writing this on Friday, May 8 and today The Daily Shine was actually quite helpful. It led me in an exercise where I closed my eyes and loosened my jaw and, “Holy shit,” I thought, “I didn’t even realize how tense I was!”

I had been grinding my teeth! Who knew? I did my best to focus and lean-in to the meditation.

“Maybe I’m too cynical,” I thought, feeling a bit more relaxed as the podcast came close to its end.

The narrator then thanked me for tuning in.

“For a limited time, we’re offering a year of Shine Premium for just $20,” she added.