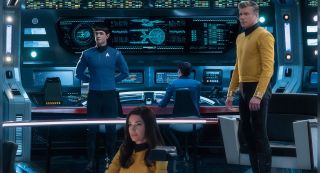 Exploring strange new worlds, seeking new life and new civilisations, and boldly going where no one has gone before has been hardwired into Star Trek’s DNA since day one. Star Trek: Discovery and Star Trek: Picard may have taken a more cynical – and serialized – view of the future, but recently announced spin-off Star Trek: Strange New Worlds is set to get back to basics…

When (spoiler warning!) the crew of the USS Discovery warped into the distant future in the season 2 finale, Captain Christopher Pike, Science Officer Spock and first officer Number One stayed behind in the 23rd century.

The trio were such a hit with fans, however, that they’re getting their own show, Star Trek: Strange New Worlds, a new series set on the USS Enterprise a decade before James T Kirk took control.

“When we said we heard the fans’ outpouring of love for Pike, Number One and Spock when they boarded Star Trek: Discovery last season, we meant it,” executive producer and franchise overlord Alex Kurtzman told StarTrek.com. “These iconic characters have a deep history in Star Trek’ canon, yet so much of their stories have yet to be told. The Enterprise, its crew and its fans are in for an extraordinary journey to new frontiers in the Star Trek universe.”

Star Trek: Strange New Worlds promises to be an exciting departure for Trek TV, so before the Enterprise fires up the dilithium crystals once more, we’ve set coordinates for the 23rd century to reveal what’s in store for Starfleet’s finest. Hit it!

The USS Enterprise has faced numerous foes in its distinguished lifetime, but few have been as problematic as the coronavirus. With lockdown restrictions bringing much of Hollywood to a halt, executive producer Akiva Goldsman admitted to Variety that he has “no idea” when Star Trek: Strange New Worlds will go into production. And seeing as a shows as VFX-heavy as the Treks tend to require lengthy post-production, we’d be surprised if we see Strange New Worlds before the second half of 2021 – and that’s being optimistic.

Luckily, we have season 3 of Star Trek: Discovery and animated series Lower Decks lined up for this year, season 2 of Star Trek: Picard due to start shooting when Covid-19 restrictions lift, and a couple more shows in development. They include a Michelle Yeoh-starring Section 31 spin-off, plus a CG kids’ show for Nickelodeon. “The intention is to have something Star Trek on the air all the time, but not necessarily on top of each other,” Kurtzman told the Hollywood Reporter back in April 2019. In other words, it’s the best time to be a Trek fan since The Next Generation and Deep Space Nine ruled the galaxy in the 1990s.

Having owned the bridge when seconded to Star Trek: Discovery’s second season, Anson Mount is back in the captain’s chair as Captain Christopher Pike. Meanwhile, after proving himself worthy of donning the pointy ears that once belonged to Leonard Nimoy, Ethan Peck returns as Spock. And Rebecca Romijn, who made a few guest appearances in Discovery, reprises her role as first officer/helmsperson Number One.

It’s still early days, so there’s no trailer – though stars Anson Mount, Ethan Peck and Rebecca Romijn have beamed in an announcement video:

The party line is very much that the show exists because of fan demand. “Without you this wouldn’t be happening,” says Peck, while Mount explains a bit about the tone of the series. “[It’s] a classic Star Trek show that deals with optimism and the future.”

Star Trek: Strange New Worlds story: what we know about this part of Trek history

Pike, Spock and Number One have been part of the Star Trek story even longer than James T Kirk – they were on board the Enterprise in original Star Trek pilot “The Cage”, unaired in the ’60s and set more than a decade before Kirk’s famous five-year mission. Jeffrey Hunter, Leonard Nimoy and Majel Barrett originated the three roles.

While we know that the trio have been together at least three years by the time Star Trek: Strange New Worlds kicks off and that a tragic fate awaits Pike – more on that later – most of their voyages remain undocumented. That means it’s prime storytelling territory.

“We’re going to try to harken back to some classical Trek values, to be optimistic, and to be more episodic,” executive producer Akiva Goldsman told Variety. “Obviously, we will take advantage of the serialized nature of character and story building. But I think our plots will be more closed-ended than you’ve seen in either Discovery or Picard.”

He also said that, “I think what we would want to do is keep the characters having moved through and recognizing the experiences they’ve had in previous episodes, but to be able to tell contained, episodic stories.”

This suggests that, while Strange New Worlds will feature an overall story arc, the show will get back to the story-of-the-week structure that defined the Original Series and much of the Next Generation era – a radical departure from the heavily serialized Discovery and Picard. Indeed, the ability to visit a huge galaxy of, well, strange new worlds, should allow the show to feel different from week to week – a versatile formula that’s a big reason for the franchise’s longevity.

Going on Mount’s performance in Discovery, Pike is the ideal captain for an optimistic mission of exploration. We can also expect to see a Spock more prone to displays of emotion than his Original Series counterpart – in “The Cage” Number One was the more buttoned-up, logical member of the crew, with her personality traits passing to the Vulcan when Star Trek went to series. And maybe we’ll finally get to find out if Number One has a surname – Discovery confirmed her first name is Una, but that’s all we know.

At this point in the Star Trek timeline, Kirk and other members of the original crew must be out there somewhere in the universe, so the smart money would be on a few headline-grabbing (recast) guest appearances – as the older members of the Original Series line-up, McCoy and Scotty would seem prime candidates. We’d also be very surprised if James Frain doesn’t reprise his Discovery role as Spock’s dad, Sarek.

And then there’s Pike’s tragic story…

When we meet him in Original Series two-parter “The Menagerie”, it’s revealed that he’s been left severely disabled by a radiation leak. In Discovery, he’s forced to endure a vision of that future. It’ll be intriguing to see how that knowledge preys on his mind, and how much it plays into the drama of Star Trek: Strange New Worlds.