The art of turning ‘Minecraft’ into the deeper, darker ‘Minecraft Dungeons’ 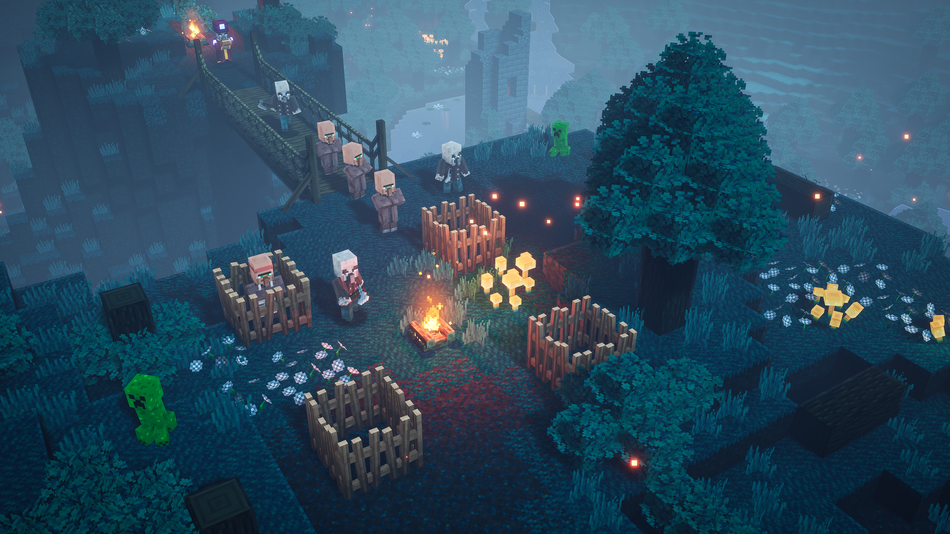 The core of Minecraft has been ripped asunder by the team behind Minecraft Dungeons to create a new, moodier experience that’s less about digging and building and more about adventure, action, and treasure.

Ahead of its May 26 release on PC, Xbox One, PlayStation 4, and Nintendo Switch, Minecraft Dungeons game director Måns Olson and art director Daniel Björkefors spoke with me in a video call about the process of adapting the iconic world of Minecraft into a new experience. We also talked about what they’re excited for players to see in the game, and how we ended up with a Minecraft dungeon crawler in the first place.

Dungeons began with a team that was looking for a project.

That’s not exactly easy to do with Minecraft’s variety of modes: Creative, Survival, and Adventure. Add onto that the freedom players have within those spaces, plus the very active mod community that allows players to tweak the way the game works and looks, and you’ve got quite a challenge to find something different.

“If we want to get away from that and play something new, we have to move quite far from what the core of Minecraft is,” said Olson. “That idea was coupled with this idea that dungeon crawlers would be a good fit.”

The developers mentioned games like Diablo, Torchlight, Gauntlet, and early 2D top-down Zelda games as some of their big inspirations when developing Minecraft Dungeons.

“We have a lot of people on the team who are big fans of the genre of dungeon crawlers,” Olson said. “That kind of felt like a natural fit for Minecraft because you do a lot of this adventuring in the caves, finding various mobs [enemies], finding treasure.”

For the cooperative multiplayer element of Minecraft Dungeons, the team also referred to cooperative first-person shooter games like Left 4 Dead and Vermintide for inspiration. Those decidedly dark and spooky games show the team’s desire to make something that feels a bit more mature than the original “vanilla” game.

From Minecraft to Dungeons

For Minecraft Dungeons, Olson made it clear that the main source of inspiration is Minecraft itself. It is, after all, a Minecraft game. So, even though the more straightforward adventuring and enemy-chasing gameplay of Dungeons is so different from the open-ended, exploratory nature of the base game, everything should look and feel like it fits in the Minecraft world.

“It’s supposed to be a little bit spooky and adventurous.”

Part of this means changing enemies a bit to make them fit a purpose for Dungeons. While creepers and skeletons will work pretty much the same in Dungeons as they do in the original game, spiders have been altered a bit to do more than just their usual melee attack.

“We’ve taken the Minecraft spiders and we’ve given them the ability to shoot webs that entangle the player and ground them,” Olson said, explaining how they came up with different ways to make players watch where they’re going and restrict movement. “Then there’s the new mobs like the wraith. That’s an undead mob that spawns this blue wraith fire that pops up from the ground so you have to run away or else you quickly die.”

One of the team’s favorite new creations is the adorable little key golem, Björkefors said. It’s basically just a key on legs with a cute face that helps players unlock doors.

“Development in Dungeons is quite fast,” he said. “You start mocking up on a piece of A4 paper with a pencil, and then there is a model in the game in like half a day just to see how it looks. The key golem was one of those.”

While the little character started as a joke, it turned out it actually worked very well, and it’s become a sort of unofficial mascot for the game, Olson said.

On the broader side of art things, Björkefors said that while they’re developing Dungeons levels exactly the same way as in vanilla from a software and procedural standpoint, there’s a different approach to the whole mood of the game.

“The main changes are light, environments, and effects like bloom and colors,” he said. “It’s a dungeon crawler, so it’s supposed to be a little bit spooky and adventurous.”

Part of that involves painting the world in a way that leads players into certain areas with paths and other enticing elements, or obfuscating secrets that players need to work to discover amid the dark caverns of Dungeons.

“It’s kind of stylized compared to the vanilla [game], but still very recognizable,” Björkefors said. “With RPG games, for me at least, coming from Final Fantasy or Zelda, I need that mood to enjoy the adventure.”

A big part of that Minecraft Dungeons mood is exemplified by a gameplay mechanic that comes into play during cooperative multiplayer when one player loses all their health in combat and goes down.

“When somebody is down, night falls,” Olson said. “In Minecraft, when night falls, that means mobs spawn all around you, so we increase the sense of danger, add tension, and give a strong incentive for players to want to go revive each other. If they don’t do that quickly enough, eventually you have phantoms sweeping in and doing damage, and it becomes this very intense moment that I think is a lot of fun.”

Minecraft Dungeons is a step in a new direction for Minecraft in many ways, and that means there’s a new target audience for this spin-off. It’s kind of a bridge between the mellow-ness of Minecraft and the more hardcore vibe of games like Diablo.

“There are hardcore Diablo players that are parents, and they can’t play that game with their kids, right?” Björkefors said, referring to the blood, gore, and horror elements in those games. “But with this game, you can really sit down with the whole family and [play]… people are looking for a four-player co-op game that will work across the age boundaries a little bit better than some of these other games.”

Part of reaching across that age gap is having less violence in Minecraft Dungeons, but another important piece of that puzzle is accessibility, Olson said.

“The keywords of ‘approachable’ and ‘accessible’ are things that have been on our minds since the start of development,” he said. “If we put this game in front of a player and put the gamepad in their hands, hopefully they should be able to pick it up and start playing essentially without a tutorial.”

“That is super exciting for me personally — watching streams of players playing the beta and saying, ‘Look, I’m not a big Minecraft player normally, but this game seems like something I can get into,’” he said. “If we can get that, that’s fantastic, both in terms of widening the reach of the brand and on a personal level… if our game can appeal to players who might not normally play this type of game or a Minecraft game, then fantastic.”

Getting Minecraft Dungeons into the hands of players and seeing how they react is exciting for the team. Even if those reactions aren’t all great or constructive, they’re helpful nonetheless.

“We want to keep working on the game and exactly how that ends up happening depends on how the reception to the launch is,” Olson said. “We’re by no means out of ideas.”