The Boys season 2: release date, cast, trailer and everything we know 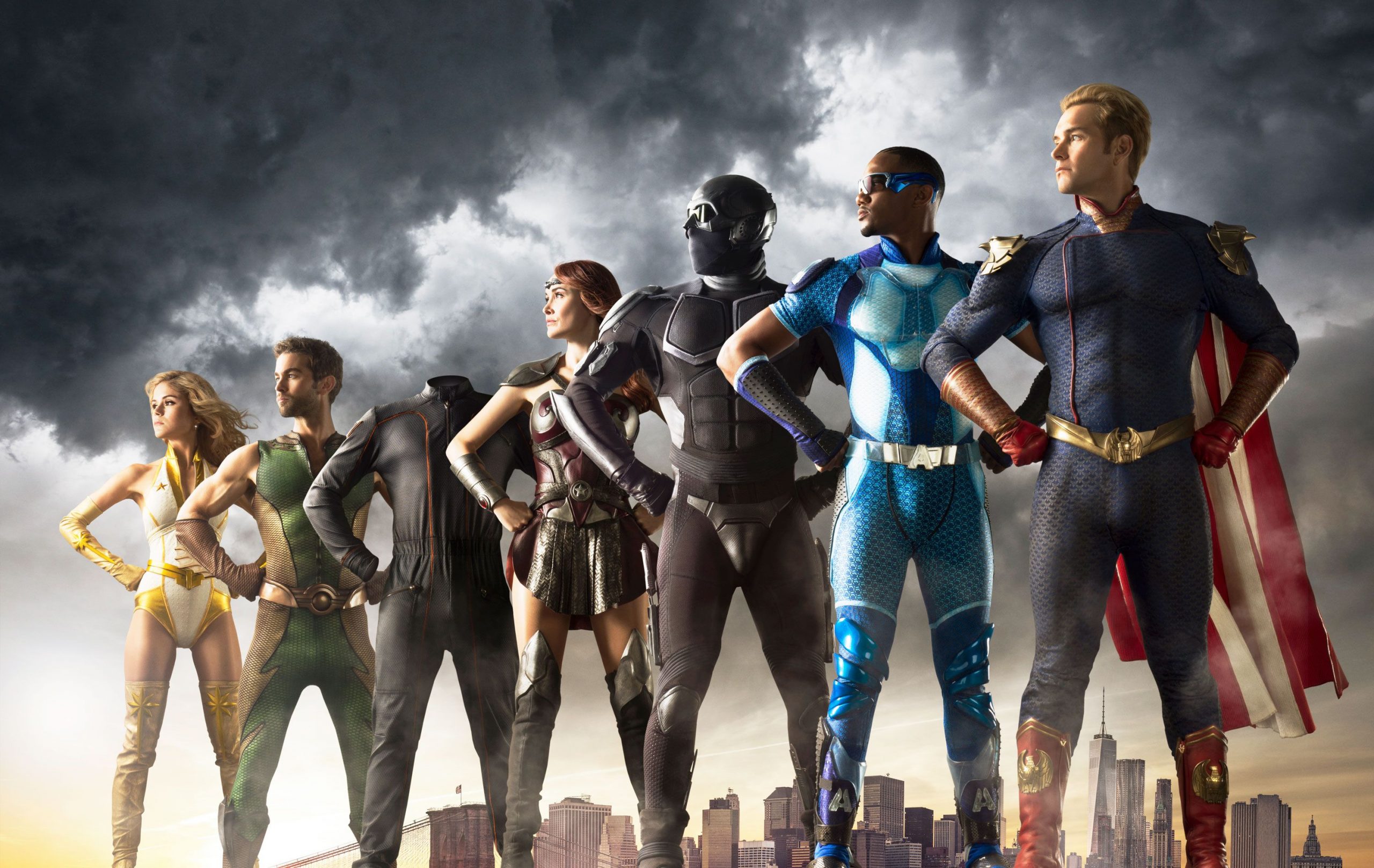 The Boys season 2 release date seems may well be announced very soon, judging by recent Twitter activity from creator Eric Kripe. The first season of The Boys – about a group of nobodies who set themselves the task of bringing down The Seven, a corporate-owned and corrupt set of superheroes – wasn’t your average superhero TV show. Now, as post-production work on the new series is currently being completed remotely, we’re ready to hear more on The Boys season 2.

In a now-justified show of faith, The Boys season 2 was announced by Amazon Prime before it even debuted on the streaming service, and it proved one of the best Amazon Prime shows released so far. In season 2, expect to meet brand new capes, as showrunner Eric Kripke and company explore new avenues of the source material for more stories and characters, like Stormfront, a new member of The Seven debuting in the next set of episodes.

Here’s what we know about The Boys season 2, including its release date, cast, first trailer and more.

The Boys season 2 release date will be announced soon

I get asked a lot, so #TheBoysTV update: finishing #Season2 remotely. Still some VFX & sound to do, but we’re SO CLOSE! Airdate (& other cool shit) will be announced SOON!#TheBoys @TheBoysTV @PrimeVideo #SPNFamily @Sethrogen @KarlUrban @JackQuaid92 @antonystarr @ErinMoriarty_ pic.twitter.com/mpS8lHgZT7May 16, 2020

The Boys season 2 release date seems near, based on a tweet by creator Eric Kripke. “Airdate and other cool shit will be announced SOON!” is how he put it. At the time of writing, VFX and sound still needs finishing on the show. A release date for summer 2020 still seems likely, though you might be looking at late summer.

We were due to learn more about The Boys season 2 during the PaleyFest TV festival in March 2020, but the event was cancelled over the global pandemic. It’s possible that this is when Amazon planned on revealing a tentative release date for The Boys season 2.

A release date of mid-2020 still fits, though, as actor Karl Urban confirmed on Instagram that he wrapped filming on the show back in November 2019.

The Boys season 2 trailer: first look at the show here

Get ready for Round 2, Supes.🖕 #TheBoysTV pic.twitter.com/s1nVnqYRZuDecember 7, 2019

The Boys season 2 trailer doesn’t reveal much about the plot, but it – predictably – has plenty of violence, and snapshots of the show’s characters. That was released in December 2019, and remains our only look at season 2 to date.

It appears that The Boys season 2 will pick up right where the first left off, with the evil Superman stand-in Homelander (the magnificent Antony Starr) revealing a super-powered son, and Hughie (Jack Quaid) saving the life of speedster A-Train (Jessie T. Usher), despite running through his girlfriend at the start of the show. Ouch.

We also caught a shot of Terror, Billy Butcher’s dog from the comics which, given his special, err, talent, is one of the most exciting additions to the cast going in to season 2.

While we’ve been waiting for a new trailer of The Boys season 2, Amazon did release this image, which some believe is a teaser for the next season (though nothing in the tweet indicates this either way).

Expect both The Boys and The Seven’s cast members to return. Karl Urban will return as Billy Butcher, along with Jack Quaid as Hughie, Laz Alonso as Mother’s Milk, Tomer Kapon as Frenchie, and Karen Fukuhara as The Female, all of whom survived the first season.

Starlight (Erin Moriarty) will return, along with other members from The Seven: Homelander (Antony Starr), gross fish man The Deep (Chace Crawford), Queen Maeve (Dominique McElligott) and probably A-Train (Jessie T Usher). However, the latter will need to recover from the heart attack he suffered at the end of season 1.

Actor and comedian Patton Oswalt will join Aya Cash’s Stormfront, along with two other new faces playing key roles: according to Deadline, Goran Visnjic and Claudia Doumit are also in for the grisly season 2 party. Our first look at Stormfront has been revealed. Take a look at her design below:

Stormfront will be like a “hand grenade” thrown into the Seven, according to Cash. “I think she’s here to blow up Vought,” Cash told EW. “She’s here to try to get Vought back to the original idea behind creating superheroes… And she can be quite the feminist. There’s a lot of, I wouldn’t say misdirect, but she also is a very empowered woman.” This new Vought ‘Supe’ has enough power to actually fight The Seven.

Look at their faces, those smug pieces of–wait, who the fuck is that green guy? pic.twitter.com/QSPSFH5qsXApril 16, 2020

Will we see a return of the so-called “invisible c**t”? In Eric Kripke’s tweet above, we can see a “green guy” who looks an awful lot like Alex Hassell’s Translucent. The trouble is, Translucent was killed by Frenchie and his “ass bomb”, by, err, shoving explosive where the sun don’t shine. So we’re not sure how Hassell is returning, but we’re interested to see how it’s going to happen.

While nothing is confirmed, it looks like Jeffrey Dean Morgan (best known as the fiendish Negan in The Walking Dead) could have a place in The Boys season 2 cast. Following Eric Kripke’s tweet saying “I’ll make you a deal. Season 3. I’ll write it, and if you’re avail, come shoot it!”, Morgan replied, “in a heartbeat!”

What is confirmed is that the “terrifying” Black Noir is set to play a major role in the second season.  Announced at C2E2 Expo (via ComicBook.com), the mystery of the dark-suited masked vigilante will hang over season 2, and he’ll have no lines of dialogue or action scenes. We’ll never even see his face. “You’re going to love what’s coming up for Black Noir. It’s so good,” Karl Urban enthused at a panel.

Episode titles for The Boys season 2 were revealed on the WGA website. They don’t reveal much, but hint just a little at what to expect from the coming year.

A few elements hang in the air from the season one finale. First, expect Compound V, the mysterious drug that gives superpowers to humans, to remain a recurring mystery.

“If it’s a secret, if it’s nothing the world knows about yet, then it [Compound V] becomes a secret that everyone will kill for, and it gives you an object that everybody wants, and it does all the great things a McGuffin does,” Kripke told Entertainment Weekly. Now Billy and Hughie know that secret, what happens next?

At the end of season one, Homelander dropped Billy Butcher on the lawn of his wife, Becca, who he presumed dead. Instead, she has a family with Homelander, including their superpowered son. It’s quite a predicament for poor Billy: how will he escape? And does this mean Billy and the rest of The Boys will struggle to function as an underground group, now Homelander has Billy in his laser sights?

The death of Madelyn Stillwell (Elisabeth Shue) will be important for season 2’s story, naturally. Then there’s Vought International’s mysterious CEO, Mr Edgar (Giancarlo Esposito), who looks to be appearing in around four or five episodes, having made a notable cameo at the end of the season. At least one new villain will be added to the mix from the comics, too: Stormfront (Aya Cash), a kind of Thor/Shazam mash-up who’s gender-flipped from the comics. We can’t tell if she’ll be a villain or not yet, though…

The best superhero show on TV?

The Boys was one of the surprise hits of the year, with a strong ensemble cast and an original angle on the superheroes in a time almost saturated with them. Executive producer Seth Rogen’s words about the next set of episodes to Collider justify our optimism for the show’s future. “We just watched, actually, the first episode of the second season this week. It was a wonderful thing as producers. This is way better than I ever could’ve hoped it would be.”