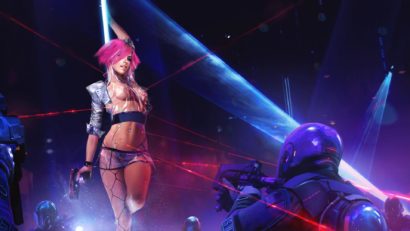 Musk has spent the past couple days yelling to his 33.4 million Twitter followers about how it’s time to “FREE AMERICA NOW” instead of continuing to impose shelter-in-place orders that slow the spread of covid-19. To drive home his point about how it’s actually modern fascism to recommend social distancing based on models followed by other countries who’ve done a much better job of containing the virus than us, Musk changed his Twitter avatar to a picture of JC Denton from Deus Ex.

He’s also propped up the opinions of millionaires and conspiracy hucksters who definitely don’t have any personal stake in sacrificing thousands of lives at the sputtering blood altar of industry. Clearly, he doesn’t either. I’m sure he had other reasons when he unsuccessfully tried to force his employees to come to work in direct violation of shelter-in-place orders. Obviously, Musk is a reliable source on covid-19, given that, back in March, he famously prognosticated that there would be “probably close to zero new cases” in the U.S. by “the end of April.” It is the end of April. According to our sister site Gizmodo, there are still almost tens of thousands of new cases reported daily across the country and around 2,000 new deaths per day. The U.S. death toll currently sits at above 61,000, surpassing that of the Vietnam War.

The JC Denton profile pic might be a reference to an unrelated meme that sprung up on YouTube last year, or Musk might be attempting to draw a comparison between our current situation and the plot of Deus Ex, in which a pandemic known as “the Gray Death” runs rampant across the globe. Denton himself is an agent who discovers that the anti-terrorist coalition he’s a part of is actually trying to keep a vaccine from reaching anybody other than powerful, wealthy elites; he defects, risking his own life in the process. Ultimately, he finds out a trillionaire businessman named Bob Page is behind everything, using both the virus and his company’s stranglehold on the vaccine as a means of exerting control over society. Page uses his wealth and influence to shroud all of this in a smokescreen of misinformation.

If you keep abreast of what billionaires are up to these days (and who doesn’t, given that our fates dangle from horrible strings they grasp in their engorged hands), you might recognize some of Page’s greatest hits. Notably, he at one point donates a paltry 10 million credits to help those who’ve caught the Gray Death and goes on about how sad it all makes him while not actually giving a shit and directly benefiting from the virus’ spread. The donation never makes it to clinics, either, which gives me mad déjà vu for some reason, but I can’t put my finger on why.

Page’s ultimate goal, meanwhile, is to merge with a mega-powered AI and become god, restructuring society in his own image. Musk, thankfully, has no such pretensions toward egomaniacal immortality, unlike his fellow hyper-wealthy people (though he does own a company that he claims is working on a Deus Ex-like brain-computer interface). He just wants to be in charge of moving society to Mars. Restructuring it in his image, presumably, would just be a happy byproduct born of necessity and definitely not an ego the size of the planet itself. Also, a lot of people would probably die in the process, but that’s neither here nor there.

All of this leads me to wonder: Has Musk, a self-styled gamer, even played Deus Ex? But I don’t think it really matters. He’s insanely rich in a country that bends over backward to cater to the whims of wealthy sociopaths. In the past four weeks—with the pandemic at its peak—America’s billionaire class has added $308 billion to its wealth, in part due to government handouts that disproportionately favored the wealthy. This includes Musk who, according to The Guardian, saw his net worth increase by over $1 billion.

Musk can say whatever he wants, do whatever he wants, and play whatever he wants without fear of consequence. As with anything else he’s ever done, he’s using his gargantuan platform to meme us into oblivion because he wants even more attention and money. He will continue to receive those things in incalculable abundance until death mercifully reduces him to luxury worm food. And if he manages to dodge that by fashioning a low-poly, JC-Denton-looking cyber body to match his PS1-ass cyber truck, then god help us all.