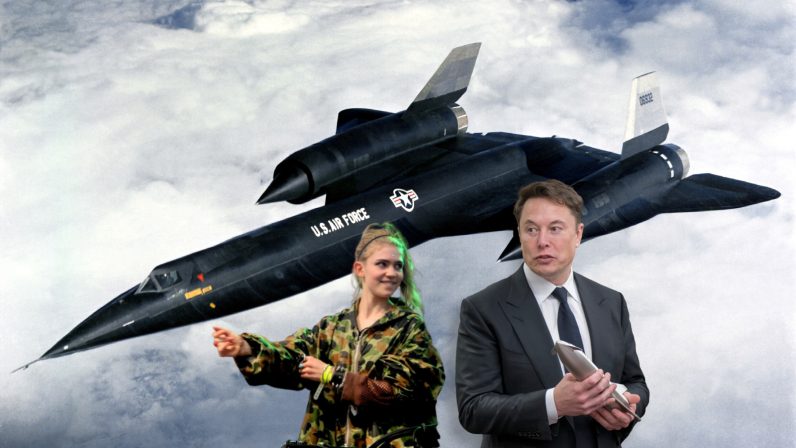 You’re into tech, so you follow Elon Musk on Twitter. The Tesla CEO has had a damn busy week, so let me catch you up. Mostly he’s been moaning about TSLA stock price, selling his homes, and telling the world about his new baby, named: X Æ A-12 Musk.

Musk tweeted the “name” early yesterday, and has sent the world into a downward spiral of concern and confusion. Luckily, the youngster’s mother, musician and artist Grimes came to the rescue with an obviously logical explanation.

•X, the unknown variable ⚔️
•Æ, my elven spelling of Ai (love &/or Artificial intelligence)
•A-12 = precursor to SR-17 (our favorite aircraft). No weapons, no defenses, just speed. Great in battle, but non-violent 🤍
+
(A=Archangel, my favorite song)
(⚔️🐁 metal rat)

There are mountains of explorations into what all this might mean, but let’s take a look what the A-12 bit is all about.

According to Grimes, the A-12 part of the name pays homage to the Lockheed Archangel-12, the plane that preceded the couples’ favorite aircraft: the SR-17 Blackbird. The A-12 was a mach 3 spy plane made for the US Central Intelligence Agency (CIA) back in the 1960s, in case you wondered.

As Grimes rightly points out, the plane wasn’t designed to carry offensive payloads, but its task was to perform reconnaissance missions and gather information about potential surface-to-air missile threats to the US.

With a peak cruising altitude of around 95,000 feet (about three times the height of Mount Everest), the plane was designed to fly undetected. It’s widely respected as being one of the pioneering aeronautical platforms that led to the development of various other iconic spy planes and covert technologies.

It could fly and so high and so fast, that it could outrun surface-to-air missile attacks.

Despite being in research and development for years, the A-12 had quite a short operational life — just one year between May 1967 and 1968. During that time it undertook one operation, which consisted of 29 missions over South East Asia.

During the first mission, the plane flew at 80,000 feet, over Thailand and Vietnam and collected footage on more than a mile of film. After examination, no significant threats were found and the mission was declared a success.

Eventually funding for the A-12 was pulled because the US was working on the newer SR-71 Blackbird, a slightly longer two-seater version. The CIA had also been using CORONA satellites to gather low resolution imagery of nations on the US’ watch list. The satellites were less prone to attack, and more surreptitious than planes. Those two combined to make the A-12 largely redundant.

Given the current climate it’s interest Musk would name his child after something related to a project code-named: Corona. There’s no evidence that this was intentional. We can only put it down to coincidence for now.

It’s not clear how we’re supposed to pronounce Æ A-12. There’s also some concern if the name is even legal. According to Californian state guidelines, cited by BBC, no pictograms, or other non-alphabetized marks can be used. A name must be registered using any of the 26 letters of the alphabet.

One of the more plausible theories is that the name will be written out phonetically, as X Ash Archangel.

Whatever the case, the A-12 is still cool as hell.