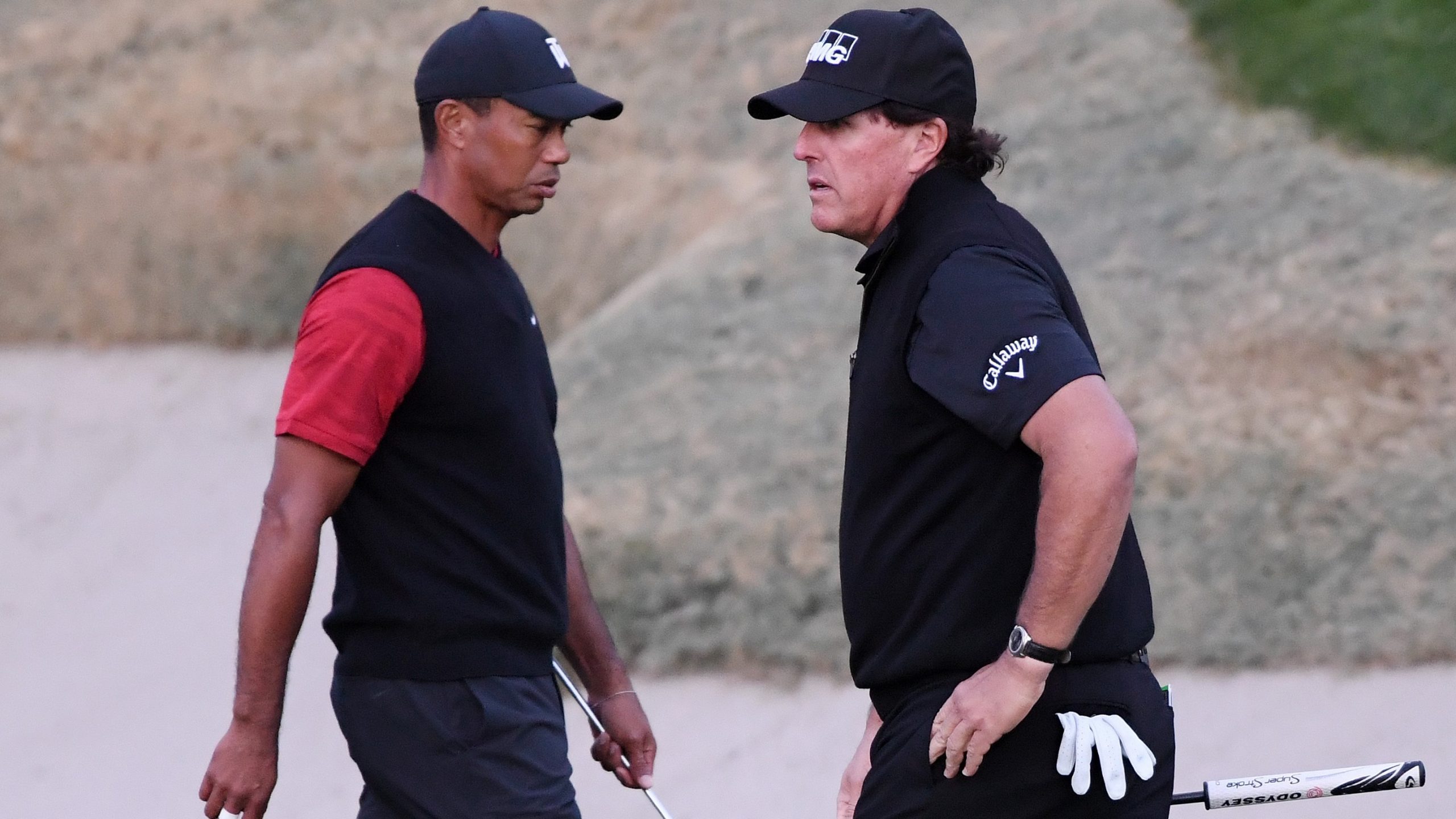 Golf is back on the small screen this week as The Match: Champions for Charity pits Tom Brady and Phil Mickelson vs Tiger Woods and Peyton Manning with a $10m charity purse at stake. Don’t miss a shot of today’s PGA action – here’s how to watch a live stream of The Match online, no matter where you are in the world.

The Match: Champions for Charity is the follow up to Tiger and Phil’s first skins clash back in November 2018, which saw Mickelson take home the full $9 million bounty after an epic 22-hole shootout.

The Match tees-off at 3pm ET/12pm PT on Sunday, May 21. Coverage is scheduled for 2pm to 7pm ET in the US on TBS, TNT, HLN and TruTV – so any Sling TV package has you covered. There’s also a FREE international viewing option courtesy of CNN.

That was back before anyone had ever searched for hand sanitizer on eBay, though, and today’s encounter features an even bigger $10 million war chest  – all of which will be donated to Covid-19 relief efforts and charities like the American Red Cross and Save Small Business. Which frankly is a relief in and of itself, given Mickelson’s estimated career earnings clear the $800 million mark.

Even more intriguingly, The Match 2 is being staged as a pro-am where Woods and Mickelson will be playing alongside NFL legends Peyton Manning and Tom Brady, respectively. The star quarterback duo both play golf to a very good standard, boasting single-digit handicaps, and will no doubt be bringing a taste of their former AFC rivalry to the fairways this weekend.

The smart money suggests Peyton may finally have the upper-hand over TB12. Having hung up his cleats five years ago, the Tennessee native is likely to have spent more time on the course than Brady of late, as the GOAT was busy adding another three Super Bowl rings to his collection over the same period.

Know what today’s golf is all about? Great – now just follow our guide as we explain how to watch The Match and live stream Tiger vs Phil and Manning vs Brady online from anywhere right now – there even seems to be a FREE viewing option in some countries, courtesy of CNN!

How to watch The Match from outside your country

We’ve got a full regional breakdown of The Match live stream options below, but the first thing you should know is that anyone who might be abroad at the moment can still tune into the action as usual by using one of the best VPNs.

This nifty bit of software allows you to get around geo-blocking restrictions and watch the same high-quality golf feed you normally would at home. Best of all, they only take a few minutes to set-up and are really easy to use.

We’ve thoroughly tested all of the most popular VPNs and rate ExpressVPN as the best of what’s out there. It’s simple to install, boasts strong security features, and is compatible with just about any streaming device out there, including the Amazon Fire TV Stick, Apple TV, Xbox and PlayStation. You can also use it with Android and iOS mobile devices, so to get that home broadcast and stay safer online, this is our pick of the litter.

Best of all, ExpressVPN comes with a 30-day money back guarantee so you can try it out for a month for free, or sign up for an annual plan and get 3 months absolutely FREE.
View Deal

Coverage of the match is schedule for 2pm to 7pm ET in the US, with the first drives set to be hit at 3pm – that’s 12pm PT and 1pm CT. Those with cable are absolutely sorted, as TBS, TNT, HLN and TruTV are all showing The Match 2 today

If you haven’t got cable, there’s also an easy way to watch The Match live today. It’s courtesy of Sling TV, which offers TBS as part of its Sling Blue package and TNT as part of Sling Orange – both cost just $20 for the first month.

Alternatively, you can always take advantage of the FREE 1-week trial currently being offered on Hulu + Live TV packages, which includes access to the golf.

If you’re outside the US this weekend but want to access one of the above options, then you can use a VPN to effectively transport your computer, phone or tablet’s IP back to a stateside location – ExpressVPN being our current favorite.

How to watch The Match: live stream for FREE in the UK

UK golf fans used to getting their fix through Sky Sports may be surprised that the network’s Sky Sports Golf channel isn’t hosting The Match today.

Instead, Turner network broadcast exclusivity means that it’ll be shown on CNN in the UK, with coverage starting at 8pm BST. The good news is that CNN International can be watched online for free in the UK – so you can live stream The Match 2 without paying a penny.

Anyone from the UK currently abroad can watch Tiger vs Phil and live stream the Match like they would at home by getting a VPN and following our instructions above.

How to live stream The Match in Canada right now

Golf fans in Canada are also at the mercy of CNN, but fortunately its CNNgo online streaming platform gives you access to all of the network’s channels.

Specifically, you’ll need to tune in to CNN International – tee-off is scheduled for 3pm ET/12pm PT, as in the US – and you’ll have to sign-up by providing details of your cable provider.

Remember, if you can normally access golf coverage in Canada, you can make use of a VPN to access all the services and content you would back home.

How to watch Tiger vs Phil: live stream The Match from Australia today

In Australia, the most comprehensive golf coverage around is generally available through Kayo Sports – a great over-the-top streaming service that offers access to over 50 sports live and on-demand, courtesy of partnerships with big name pay TV channels like Fox Sports, ESPN, and beIN Sports.

However, in this case…it’s CNN or bust. The international version of the channel offers live streaming on its website, so you should be able to watch The Match: Tiger vs Phil 2 online today.

As ever, Aussies abroad wanting to tune in to the streaming services they use at home can turn to a VPN and reconnect to coverage from Down Under in a matter of minutes.

The Match format: how is Champions for Charity being played today?

Champions for Charity, or The Match 2 if you prefer, is being played a Best Ball Four-Ball on the front 9 (all players play every shot, best score wins), followed by a Modified Alternate Shot format on the back 9 – where both players tee-off and then select a ball to play on an alternate basis from there.

If that sounds straightforward, don’t be fooled – as well as each hole being contested for the attached ‘skin’ (prize money), there’s also a series of additional challenges that can be completed to raise even more money for charity.

One of these is a ‘one-club challenge’ on the par-4 fifth, where Woods and Mickelson will have to play the hole with a single stick – the 4-iron and 6-iron are popular choices because of the way they combine loft and distance, but they’ll really hope they stay out of the sand. A whopping $25 million will also be awarded to charity in the event of a hole-in-one.

A final wrinkle is the venue: the Medalist Golf Club in Hobe Sound, Florida. It’s Woods’ home course, so the 15-time Major winner likely has a degree of advantage – something not lost on Phil Mickleson, who’s already indulged in some playful banter, saying he’s relishing the chance to take down Tiger in his own backyard.

Expect to see more forced trash talking as The Match gathers steam throughout the day, but at least they’ll be faking it for a good cause. Let’s just hope Tom Brady has all the necessary permissions for exercising outdoors in Florida this time round.