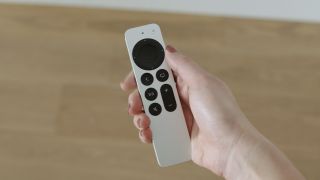 Finally, a new Apple TV iteration is here, with the Apple TV 4K 2021 arriving in late May of this year.

It’s by no means the only announcement of the Apple Spring Loaded event – which saw the unveiling of the long-rumored AirTags, as well as a new iPad Pro – but for TV streaming enthusiasts, this is the one we’ve been waiting for.

But how revolutionary is the Apple TV 4K 2021, the streaming device iteration we’ve been waiting on for nearly four years?

The answer: not very. There are some notable changes here, most notably the new Siri remote, which overhauls the button layout and banishes the divisive trackpad (carried over from the Apple Mouse and left to flounder in living rooms the world over).

The new remote has a pleasing five-way trackpad, with a surrounding interface that allows you to rewind or fast forward in a circular motion – and is reminiscent of the dial design on the iPod music players of yore. It also sticks the Siri voice command button on the side of the remote, which we expect will give users a sense of speaking into a personal recorder, like some kind of noir detective or failed author.

There’s some good, straightforward button functionality now, alongside some universal remote functionality to ensure you can turn the TV on and off without a separate clicker.

But aside from those remote updates, there’s little else to shout about. High frame rate HDR will be exciting to some sports fans, but it’ll require a 120Hz TV, and be limited to very little content. An upgraded A12 Bionic chipset will certainly up the processing smarts, but the chip is also several years old by now – first appearing in the iPhone XS back in 2018 – and there’s a sense that the Apple TV line is still very much a secondary consideration for the company.

Inevitably, the reality of the Apple TV 4K 2021 is nowhere near exciting as what might have been. Some of the rumors circulated by Bloomberg suggested that Apple was gearing up to release a media device that combined the streaming smarts of Apple TV with built-in speakers (like the Fire TV Cube) and even a smart display screen.

This chimera of smart home and streaming functionality could have actually caused some disruption, but the Apple TV 4K 2021 is really just the Apple TV 4K 2017 with a bit of spit and polish. After four years of waiting, that’s a bit disappointing.

Apple has trailed behind much of the competition in the home streamer space, with it being four years now since the launch of the Apple TV 4K in 2017. The range was well due a refresh, then, and Apple likely couldn’t wait any longer to keep its foot in the door, or otherwise discontinue the older, ageing models before it had a successor.

The Apple TV line hasn’t increased in price with this new model, matching the RRP of the 2017’s 32GB / 64GB iterations – but a $179 / £169 / AU$279 starting price is still a big ask when there are such cheap streaming devices around, and the Apple TV 4K 2021 isn’t doing enough to justify tripling or quadrupling your home streamer cost.

But the demands and expectations of home streaming are changing, and other companies – like Amazon, with its speaker-streamer hybrid Fire TV Cube, or any other host of manufacturers offering affordable 4K streaming sticks – have been only so happy to adapt to them.